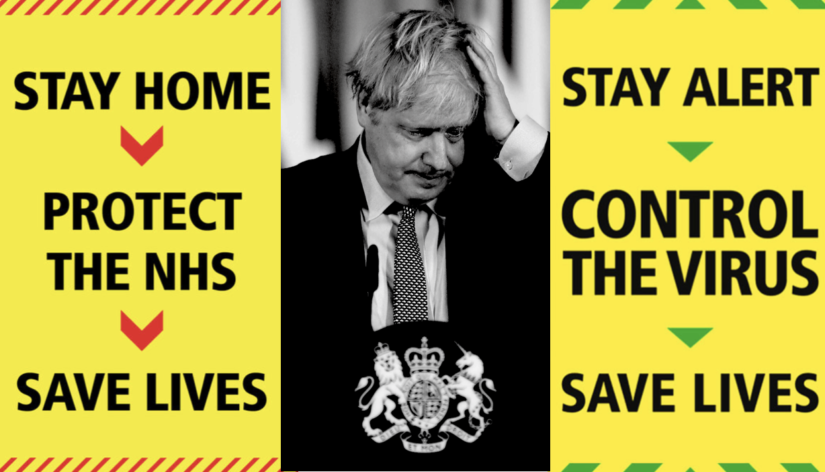 By Rob Woodward – TruePublica: The national Covid strategy managed by the government is now in disarray. The mood in Tory HQ is migrating away from its beloved Brexit leader. The mainstream media are now causing confusion, the country is heading towards chaos.

What is the general public supposed to believe when one mainstream newspaper reports that Covid cases are plunging and another says it’s going in the opposite direction. Another says hospital cases (in the wards) are falling, another says the infection rate (testing) is rising. One reports that Britain is open for business, another reports the second wave will do just as much damage as the first?

The children’s commissioner says the unions should stop squabbling and teachers should get back to work, the British Medical Association has backed the unions and said it’s too dangerous.

All of this reporting is just one day on the front pages.

For the time being, the general public is on the side of the government. The latest voting intentions (CantarPublic) put the Tories at 51 per cent (down 3 points) and Labour at 32 per cent (plus 4 points). Saving jobs and businesses have been widely recognised that without government intervention, ten million people would now be fully unemployed and one million companies would have gone bankrupt. This is, in fact, the number of people out of work right now and the number of businesses that have applied for government loans to save them from collapse.

The entire railway in Britain system has been effectively nationalised. Transport for London has just gone bust and also been nationalised. I hear that members of the TFL board have even been removed and government officials are in charge. Sadiq Khan is blaming the government when in reality TFL was already in big trouble before the pandemic hit Britain.

We are told by the government that the peak of Covid infections and deaths in Britain has been reached and we’re on the way down. And yet, we now hear that the government is expecting a brutal second wave and ordered funeral directors to prepare for 100,000 dead in the autumn.

We are told that deaths from Covid are just over 30,000 when the evidence is there that over 60,000 (Financial Times) have died so far.

We are told by the government that arrivals to airports and ports in Britain will require a 14 day period of quarantine (BBC) – and then told that is not the case (BBC).

We are told the virus will be ‘wiped out’ within weeks in London (The Sun) and yet the infection rate will now increase within weeks (ITV).

Boris Johnson clearly stated to parliament that his government moved swiftly to protect the country’s vulnerable care homes, when, in fact, that did not happen at all (Reuters Exclusive).

They are relentlessly monitoring public opinion, using focus groups and blending societal wide data with aides receiving near-daily updates on the public mood. Instead of acting, the government is reacting.

This confusion is deliberate. It has been concocted to get the government out of the mess it finds itself in. It is largely the work of Dominic Cummings – a man who believes in chaos theory and that better things can be rebuilt from the rubble and ‘once in a lifetime opportunity”. The confusion allows the government to manoeuvre and provides cover from the evident tracks of failure. So far, the government has moved from blaming individuals to whole organisations. Strategically, the government has now shifted to blaming the entire country by allowing ‘common sense’ to prevail.

The overall strategy has been one of failure. This is because the government are working behind the evidence. They are relentlessly monitoring public opinion, using focus groups and blending societal wide data with aides receiving near-daily updates on the public mood. Instead of acting, the government is reacting.

The governments’ own 50-page Covid Recovery Strategy Document makes clear what actions are required. But the car-crash of chaos has happened.

This collision, of obsessive data tracking of public opinion, says a lot about a government that got into power by deceit but is now in a crisis it can’t manipulate.

It explains Johnson’s team approach and the U.K.’s response to the pandemic.

The car-crash has Tory principles of the free-market, of angry Tory donors and his own ranks banging the desk with clenched fists against what the science says and what a very hesitant public really thinks. Ending the lockdown is good for the backers of Boris but bad in the eyes of the public.

We’ve gone from the certainty of ‘Stay Home’ to the ambiguity of ‘Stay Alert.’ The clear first message has gone to confusion. Charlie Cooper from Politico reports that – “the phrase “Stay Alert’ itself did not emerge from a vacuum. The internal polling is pretty extensive every day,” (said the official). “We get an overnight breakdown of surveys of 2,000 adults. We get stats on how worried people are, people’s perceptions of risk, whether they feel they’re being served by government information, whether we’ve got the balance right between the economy and healthcare, polling on people’s finances, thoughts on the NHS, about social distancing, businesses, workplace, face masks.”

The Johnson government is more concerned about how many people have heard of ‘R’, if more of the public want to wear face coverings in shops; whether people are comfortable about relaxing the two-meter social distancing rule, or about sending their children back to school than they are about the actual science or recommendations from the scientific organisations set up to advise government officials.

The car-crash has revealed something else to the Johnson team of public relations. The general public is now moving to a stage where more than 50 per cent are now becoming traumatised by the knowledge that at least 40,000 people are to die in phase one of the pandemic and that phase two might be as bad.

There are some “libertarians in the party who want us to say that it must be up to any individual to decide their own risk and take part in the economy as they want,'” one influential backbencher and former Cabinet minister said. But “the bulk of the party recognizes the public has been through a very bitter experience and wouldn’t thank us if we relaxed too quickly.”

One senior Tory has said – “People have got to get their heads around the fact that the government is no longer going to be able to tell them exactly what to do. They are going to have to have agency and apply common sense. It stands to reason we’ve got to trust people.”

Johnson’s lack of knowledge, dislike of detail, reluctance for hard work and lack of ability at the despatch box may have worked against Corbyn but it is now irritating senior Tories, big donors and people like Rupert Murdoch

That’s all very well, but the thinking is that when 50,000 people are officially recorded as having died from Covid, public opinion will reverse, especially if the lockdown is proven to have been lifted to early.

The deliberate manufacture of confusion is no better explained than this. “The truth is that people really understand the message, people understand what ‘Stay Alert’ means.” This is what Health Secretary Matt Hancock told BBC Radio 4’s “Today” program last Tuesday. However, the government knew that only 30 per cent (govdocs pdf) of the public understood it.

Johnson, in his ‘Stay Alert’ speech on Sunday was explicit that it was in the hands of the people to bring the alert level down.  The message was reinforced by a graphic that was aired by every braodcaster in the land.  “As we go, everyone will have a role to play in keeping the R down. By staying alert and following the rules.”

The general public is to be blamed for the second wave death count, which may or may not be as bad as the first. That is what everyone is being prepared for. They are effectively being told to ‘take back control.’ In the meantime, Tory hardliners are getting fed up with Boris Johnson. There are rumours in the corridors of power that if things get any worse in the eyes of the public, they will wait and jettison a leader who would have failed when facing a convincing opposition figurehead in the shape of a forensic and intelligent new leader – Keir Starmer. Johnson’s lack of knowledge, dislike of detail, reluctance for hard work and lack of ability at the despatch box may have worked against Corbyn but it is now irritating senior Tories, big donors and people like Rupert Murdoch.