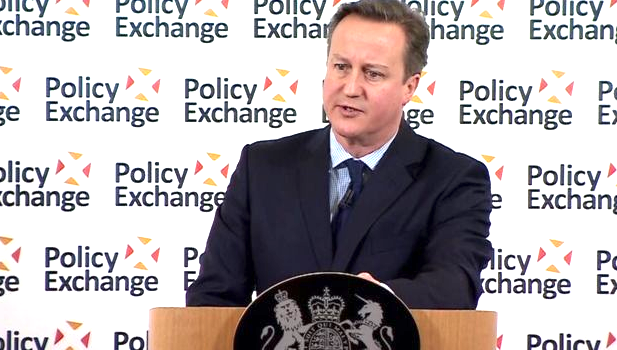 By now, there should be serious doubts about how the Brexit debate and EU referendum even got off the ground in the first place. David Cameron would have been advised by countless experts, both political and economic about the demons an EU referendum would unleash. Countless ‘mainstream media’ articles reported that his decision was to settle the long-standing battle between the right and radical right within the Tory party and that he simply miscalculated.

But there is a truth that the MSM or commentators dare not utter. David Cameron was heavily influenced politically by yet another of these guileful and influential think tanks – this time the Policy Exchange.

Policy Exchange – David Cameron’s favourite think-tank – was founded in 2001 after the ultra right-winger Iain Duncan Smith was elected leader. The think tank shaped Mr Cameron’s campaign for the party’s leadership and again his election and soon began to make waves in Tory circles under its chairman, Michael Gove, and its director, Nicholas Boles.

How right-wing is this think tank? They once suggested that efforts to regenerate struggling northern towns should be abandoned and their residents encouraged to move south – as reported here by the BBC in 2008.

Policy Exchange, along with other very dodgy think tanks, such as the IEA under investigation for its charitable status – is one of the three least transparent think tanks in the UK in relation to funding and is rated as ‘highly opaque’ by Transparify – and refuse to reveal who their donors are.

Just as importantly, it strongly promotes and always has done, a hard-Brexit or what they call a ‘clean break’ with the view that Britain will thrive under WTO trade arrangement rules.

So, is it right to say that David Cameron was A) a Remainer and B) an Atlanticist more than a Europhile? On the first, it would be fair to say, that’s not true and on the second – definitely. A British Atlanticist fundamentally believes in stronger ties with both America and NATO, not the EU project and an EU army.

Brexit was always going to create a situation where Britain would have been forced into the arms of the USA (and NATO) and strenuous efforts are underway right now to ensure that happens.

WikiLeaks releases (HERE) shed details on David Cameron’s relationship with Washington. A 2008 cable, for example, shows then shadow Foreign Secretary William Hague telling the US embassy that “we want a pro-American regime. We need it.” [i] The US official noted: “Hague said whoever enters 10 Downing Street as Prime Minister soon learns of the essential nature of the relationship with America”.

Hague also said that he and Tory leader David Cameron were “children of Thatcher” and “staunch Atlanticists”. [ii] In the words of the US embassy, Hague added that he:

“has a sister who is American, spends his own vacations in America, and, like many similar to him, considers America the ‘other country to turn to’”.

Similar assurances were made by Liam Fox, the shadow Defence Secretary who in 2009 met the US ambassador, telling him not only of his “desire to work closely with the U.S. if the Conservative Party wins power in next year’s general election” but also that “we (Conservatives) intend to follow a much more pro-American profile in procurement“.[iii]

What a coincidence then that these ‘staunch Atlanticists’ as they put it were the architects of a political plan that ended with more procurement with America – also known as – negotiating a trade deal with America.

What a coincidence then that Liam Fox was immediately appointed Secretary of State for International Trade and President of the Board of Trade to negotiate trade deals – with no trade negotiation experience. Why Fox – a man sacked for breaching national security? One assumes it had nothing to do with Atlantic Bridge, a think tank set up in Margaret Thatcher’s name –  designed purely to promote Atlanticism that itself says is an “ideology of cooperation between the United Kingdom and the United States regarding political, economic, and defence issues.” It was set up by fierce Brexiteers Liam Fox, Michael Gove and William Hague. Atlantic Bridge had a partnership program with the American Legislative Exchange Council (ALEC), a free-market organisation with extensive links to American State Legislators and corporate and industrial groups.

George Osborne, the Chancellor of the Exchequer, who supposedly backed Remain was on the advisory council of Atlantic Bridge – so was Chris Grayling. Even David Cameron’s press secretary, Gabby Bertin, admitted she was paid £25,000 by the US drug giant Pfizer when working for Atlantic Bridge. All of these people were linked to right-wing Republican’s in the Tea Party.

US Views on David Cameron

US cables show its officials viewing David Cameron in frank terms. Clinton adviser Sidney Blumenthal wrote to his boss in November 2009 noting that:

“On foreign policy, Cameron is unsure, inexperienced, oblique, and largely uncommitted. So far his foreign policy is little more than projection of his domestic politics, especially his need to keep his party behind him going into the election. His political imperatives have pressured him to lean right, including on alignment with the far right European Parliament affiliation”.[v]

Murdoch in on the game

Blumenthal also told Clinton that the mainstream media had a clear imperative – “the Murdoch outlets, (The Sun, Sunday Times, Press Assoc, News of the World) of which the Times is one, have a headline goal of getting Cameron elected.”[viii]

In advance of the military campaign against Gaddafi which began in March 2011, the Cameron government claimed that its aim was to prevent Gaddafi’s attacks on civilians and not to overthrow him.[xiv] That deposing Gaddafi was illegal was confirmed by Cameron himself when he told Parliament on 21 March 2011 that UN resolution 1973, authorising the use of force, “explicitly does not provide legal authority for action to bring about Gaddafi’s removal from power by military means”.[xv]

However, WikiLeaks files from the Hillary Clinton archive, which were released in 2016, show William Burns, Clinton’s deputy as Under Secretary of State, having talked with Foreign Secretary William Hague and National Security Advisor Peter Ricketts about a “post-Qadafi Libya”.[xvi] This was on 26 February 2011, over three weeks before the UN resolution was adopted and before military operations began. The intention was always to overthrow Gaddafi and the UN resolution about civilians was window dressing.

As the war was still raging, in September 2011, another US cable reveals that David Cameron and his French counterpart Nicolas Sarkozy were both jockeying for their oil companies to be rewarded by the new Libyan government due to their role in the war.  Clinton adviser Sidney Blumenthal noted:

“The two leaders, in private conversations, also intend to press the leaders of the NTC [National Transitional Council] to reward their early support for the rebellion against Muammar al Qaddafi. Sarkozy and Cameron expect this recognition to be tangible, in the form of favourable contracts for French and British energy companies looking to play a major role in the Libyan oil industry.” [xvii]

All of this only goes to show the extent of collusion between the Cameron government and the US administration of the day i.e. that America had given its explicit blessing to the attack of Libya that ended with the destruction of a wealthy stable sovereign state – and of course, the unbottling of African migration, that then destabilised the European Union. The right-wng press had a field day.

The WikiLeaks files also contain intriguing hints of other questionable operations during the Cameron government. There are other cables, especially with regard to Israel, Syria and other Middle-Eastern states, demonstrating a deal of orchestration between the USA and UK. [xix]

There were many tactics being used to influence the Scottish referendum. ‘Project Fear’ was highly cited by those who criticised the MSM, commentators, politicians and business leaders for threatening Scotland with, more than anything, economic exclusion.

However, to demonstrate how deeply the Westminster government was embroiled in the propaganda war – the WikiLeaks files also show that David Cameron met with representatives of American media company Sony Pictures ten weeks before the Scottish referendum in September 2014.  Discussions took place prior to the release of a TV show called “Outlander” based on Scotland’s repression under British rule. The release of the TV series was delayed in the UK, while being shown in the US, provoking suggestions this was influenced by the upcoming Scottish referendum. The leaked email published by WikiLeaks from Sony Pictures’ vice president Keith Weaver to other Sony executives made note of a planned meeting with Cameron, expressing the “importance” of the TV series to the political situation at the time.[xxi]

The USA or EU?

For anyone to suggest that David Cameron’s thoughts were not determined in some way by his favoured highly influential think tank with strong right-wing, free-market ideals, whose funding and donors is unknown, would be foolish. That Cameron was an outright Atlanticist is plain for all to see. And, if having to choose between one or the other, it is clear this is where his heart was – because he was prepared to gamble Britain’s relationship with the EU.

His governments’ ideology of austerity is nothing more than the type of financial strangulation seen in the USA represented by the worst health care system in the western world – privatisation of everything is the key to everything, irrespective of the outcomes.

The fact that key American corporations are designing and directing the dismantling of the UK’s welfare state already should be a strong hint of what is to come. Cameron accelerated this plan, as his government did with adding privatised services to the NHS and selling off state assets faster than Thatcher did.

For all of the speculation that David Cameron just ‘slipped up’ with the EU referendum that caused Brexit is frankly on the one hand – little more than a serious indictment of ‘the establishment’ that he was born into and beholden to. On the other, it indicates the inquisitive to wonder if offering an EU referendum is exactly what ‘deep state’ America wanted.

More to know – Assange, the Judge, GCHQ and MI5