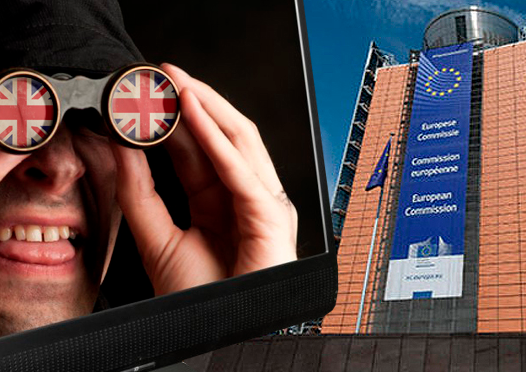 By former MI5 intelligence officer Annie Machon: Just after midnight on 16 August, I was called by LBC in London for a comment on a breaking story on the front page of The Daily Telegraph about British spies hacking the EU. Even though I had just retired to bed, the story was just too irresistible, but a radio interview is always too short to do justice to such a convoluted tale. Here are some longer thoughts.

For those who cannot get past the Telegraph paywall, the gist is that that the EU has accused the British intelligence agencies of hacking the EU’s side of the negotiations. Apparently, some highly sensitive and negative slides about the British Prime Minister’s plan for Brexit, the Chequers Plan, had landed in the lap of the British government, which then lobbied the EU to suppress publication.

Of course, this could be a genuine leak from the Brussels sieve, as British sources are claiming (well, they would say that, wouldn’t they?). However, it is plausible that this is the work of the spies, either by recruiting a paid-up agent well-placed within the Brussels bureaucracy or through electronic surveillance.

Before dismissing the latter option as a conspiracy theory, the British spies do have form. In the run-up to the Iraq war in 2003, the USA and UK were desperate to get a UN Security Council resolution to invade Iraq, thus providing a fig leaf of apparent legitimacy to the illegal war. However, some countries within the UN had their doubts and the USA asked Britain’s listening post, GCHQ, to step up its surveillance game. Forewarned is forearmed in delicate international negotiations.

How do we know this? A brave GCHQ whistleblower called Katherine Gun leaked the information to The Observer. For her pains, she was threatened with prosecution under the draconian terms of the UK’s 1989 Official Secrets Act and faced two years in prison. The case was only dropped three weeks before her trial was due to begin, partly because of the feared public outcry, but mainly because her lawyers threatened to use the legal defence of “necessity” – a defence won only three years before during the case of the MI5 whistleblower, David Shayler. Tangentially, a film is this year being made about Gun’s story.

We also have confirmation from one of the early 2013 Edward Snowden disclosures that GCHQ had hacked its way into the Belgacom network – the national telecommunications supplier in Belgium. Even back then there was an outcry from the EU bodies, worried that the UK (and by extension its closest intelligence buddy the USA), would gain leverage with stolen knowledge.

So, yes, it is perfectly feasible that the UK could have done this, even though it was illegal back in the day. GCHQ’s incestuous relationship with America’s NSA gives it massively greater capabilities than other European intelligence agencies, and the EU knows this well, which is why it is concerned to retain access to the UK’s defence and security powers post-Brexit, and also why it has jumped to these conclusions about hacking.

But that was then and this is now. On 1st January 2017 the UK government finally signed a law called the Investigatory Powers Act, governing the legal framework for GCHQ to snoop.

The IPA gave GCHQ the most draconian and invasive powers of any western democracy. Otherwise known in the British media as the “snoopers’ charter”, it had been defeated in Parliament for years, but Theresa May, then Home Secretary, pushed it through in the teeth of legal and civil society opposition.

This year the High Court ordered the UK government to redraft the IPA as it is incompatible with European law.

It also notionally gave the government greater oversight of the spies’ actions, but these measures remain weak and offer no protection if the spies choose to keep quiet about what they are doing. So if GCHQ did indeed hack the EU, it is feasible that the Foreign Secretary and the Prime Minister remained ignorant of what was going on, despite being legally required to sign off on such operations. In which case the spies would be running amok.

It is also feasible that they were indeed fully briefed and an argument could be made that they would be correct to do so. GCHQ and the other spy agencies are required to protect “national security and the economic well-being” of Great Britain, and I can certainly see a strong argument could be made that they were doing precisely that, provided they had prior written permission for such a sensitive operation, if they tried to get advance intelligence about the EU’s Brexit strategy.

This argument becomes even more powerful when you consider the problems around the fraught issue of the border between Northern Ireland and Ireland, an issue about which the EU is being particularly intransigent. If a deal is not made then the 1998 Good Friday Agreement could be under threat and civil war might again break out in Northern Ireland. You cannot get much more “national security” than that and GCHQ would be justified in this work, provided it has acquired the necessary legal sign-offs from its political masters.

However, these arguments will do nothing to appease the enraged EU officials. No doubt the UK government will continue to state that this was a leak from a Brussels insider and oil will, publicly at least, be seen to have been poured on troubled diplomatic waters.

However, behind the scenes this will multiply the mutual suspicion,and will no doubt unleash a witch hunt through the corridors of EU power, with top civil servant Martin Selmayr (aka The Monster) cast as Witchfinder General. With him on your heels, you would have to be a very brave leaker, whistleblower, or even paid-up agent working for the Brits to take such a risk.

So, perhaps this is indeed a GCHQ hack. However justifiable this might be under the legally nebulous concept of “national security”, this will poison further the already toxic Brexit negotiations.

As Angela Merkel famously if disingenuously said after the Snowden revelation that the USA had hacked her mobile phone: “no spying among friends”. But perhaps this is an outdated concept – nor has the EU exactly been entirely friendly to Brexit Britain.

I am just waiting for the first hysterical claim that it was the Russians instead or, failing them, former Trump strategist-in-chief, Steve Bannon, reportedly currently on a mission to build a divisive Alt-Right Movement across Europe…..

Annie Machon is a former intelligence officer for MI5, the UK Security Service, who resigned in 1996 to blow the whistle on the spies’ incompetence and crimes. Drawing on her varied experiences, she is now a media pundit, author, journalist, political campaigner, and PR consultant.