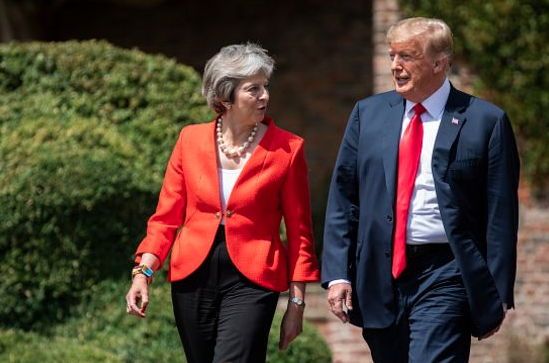 By TruePublica Editor: I’ve said for some time now that Brexit is largely about America wanting a new country to exploit. It also wants the EU to fall apart, it wants regulations built in the public interest torn down. As for Britain, Trump and his team have unequivocally stated that if there’s no access to the NHS for American corporations, there’s no trade deal. The same can be said of a vast array of deregulation to be heading our way. For all of Trump’s bluster and disruptive talk, secret post-Brexit trade talks are well underway.

“Trump’s visit to Britain is about pulling the UK closer to Trump, including laying the ground for a TTIP-style trade deal with the US which would threaten our NHS, financial regulations and food standards. When Theresa May invited Trump on a state visit, only one week after his inauguration and with total disregard for his disgraceful, racist rhetoric and policies, she clearly wanted to create a much deeper relationship with the US – one that would cement deregulation, liberalisation and privatisation into the British economy for decades to come.

“Just in the last week the government has had more secret talks with the US and they will talk trade this coming weekend. These talks happen with no accountability to the British public or even parliament. But we know enough to be able to work out that such a trade deal would affect everyone in Britain, and would lock in the ‘market knows best’ approach which has created such unsustainable levels of inequality and alienation in our society – never mind the damage it has done to the climate. We don’t want this sort of trade deal with Trump.’”

On the Chequers deal, Dearden said:

“Some people may feel that none of this matters anymore, because the government’s ‘Chequers deal’ negotiated last week will make a trade agreement with the US less likely. Don’t be deceived. The EU is unlikely to ever accept this deal anyway and even if they did it wouldn’t protect us from US multinationals suing the British government in secret courts, taking over parts of our public services, or gaining even more power over our personal data. We must use the debate on the Trade Bill next week to give control over trade policy to parliament and the people.”

Again, I would reiterate that Brexit has been in the making for some time. What you are witnessing is the construction of a corporate coup d’état – the complete opposite of taking back control. If you are in any doubt you only have to read – UK Healthcare: Welcome to little America. This censored research paper, which TruePublica published makes some astonishing conclusions, namely, that US insurance companies have been designing UK healthcare policies behind our backs for years, the result being tens of thousands of avoidable deaths and the further impoverishment and misery piled upon those least able to cope.

This report should represent the backbone of all debate about whether Brexit will be good for the country. America is coming for Britain and because of Brexit there’s now not much we can do about it.