Farage, the Brexit Party – and the con-trick 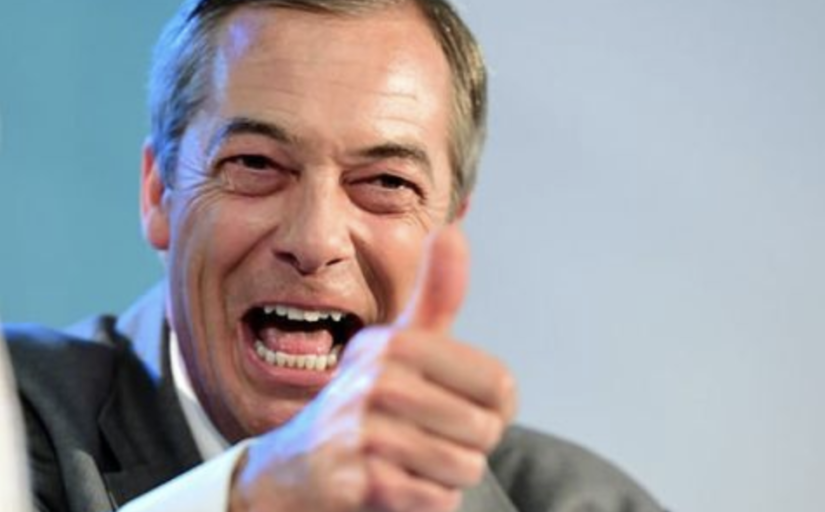 By TruePublica: On May 16th 2016, over a month before the 2016 EU referendum, Nigel Farage said – “In a 52-48 referendum this would be unfinished business by a long way. If the Remain campaign win two-thirds to one-third that ends it.”

On the night of the EU referendum itself, Sky News reported that they had an exclusive – “We now expect that the United Kingdom will remain part of the European Union. It’s 52 per cent Remain, 48 per cent Leave.”

At 10:52 p.m., the pound rose above $1.50 and reached its highest mark in six months. What no-one knew except for a privileged few, was that the pollsters had sold hedge funds critical, advance information, including data that would have been illegal for them to give the public. Within hours of the actual result, Sterling had crashed to $1.32 making hundreds of millions in short bet profits against billions laid down for an unexpected Leave result. Farage is also allegedly in that privileged few. The crisis has since seen even greater speculator profits being made as the Brexit chaos unfolded.

The result that followed in the early hours stunned many and amazingly it turned out to be 52/48 for Leave.

Farage stood accused of falsely conceding on the night of the referendum sending the pound to soar (as confidence grew of a Remain result) and then crash (with the actual result). Like all insider dealing, proof for a conviction is, at best, hard to obtain. The ‘Brexit Big Short‘ as it has become known within the banking and hedge-fund industry is legendary. And just like the massive scandal of bailing out the banks and making the poorest pay for it under the guise of austerity, itself, nothing more than the retaliatory mask of a class-war – the Brexit Big Short demonstrates that some are inoculated from the biggest of crimes.

A lot has happened since June 2016. We have seen a significant move to hard right-wing politics within the Conservatives with Farage now leading the Brexit Party in anticipation of a snap election.

For all of Farage’s finger-pointing that the EU was corrupt and anti-democratic and against the ordinary people of Britain, it is interesting to see where he now stands aside from the sweet-talking rhetoric of ‘sunny uplands’.

The Brexit Party chairman himself, Richard Tice, is now facing calls to “urgently” address concerns about his family’s links to offshore tax havens, after an investigation by openDemocracy this week that reveals that two offshore firms own large shareholdings in his family’s business.

“The Brexit Party MEP has also been urged to stand down from the European Parliament’s Economic and Monetary Affairs Committee, which oversees EU tax policy, until the matter is fully investigated.”

Tice, a co-founder of Arron Banks’s Leave.EU, says he has no knowledge of who runs two offshore companies that have held shares for over 25 years in his family business, Sunley Family Limited, and which now own a combined 42% stake. Of course, Tice denies any financial interests of the offshore companies.

Accusations of money laundering, fraud, fake news, cash-for-access, disinformation and electoral manipulation through social media have been rife with the hub of the Leave campaign. The names synonymous with this villainous and unprincipled lot roll off the tongue with ease – the IEA, Cambridge Analytica, Facebook, Aggregate IG, ERG, Bannon, Legatum, TaxPayers Alliance and many individuals with nothing more on their minds than making their fortunes out of the mess they created.

Byline Times has published some home-truths about Nigel Farage’s party of the ‘common people’ by simply looking at its candidates a little more closely.

“Out of these 20 profiled candidates, 18 are company directors, 8 are bankers, 5 work in derivatives and hedge funds, ranking them among a metropolitan and business elite which the Brexit Party rhetoric repeatedly condemns. Many of these candidates are involved with hedge funds or derivatives, sectors of the financial industry were the ones who profited from the Brexit turmoil, by betting on Sterling’s collapse and downturns in British firms. These organisations are known to oppose EU attempts to regulate the hedge fund industry.”

And as Byline also mentions, two of the candidates are directors of Leave Means Leave, the organisation promoting a hard  (WTO) Brexit.  Another is a director of the Leave group Veterans for Britain which received donations from Arron Banks and from Leave.eu.   Others have links to far-right groups which are already fomenting tensions, such as the American right-wing youth group, Turning Point; the website Westmonster, and UK organisations such as the TaxPayers’ Alliance (with all of its dodgy, undisclosed and ‘opaque’ funding).

Turning Point is a very nasty right-wing American outfit that spits its bile out – “With numerous right-wing and religious links to Donald Trump. The scandal-hit group has been plagued by incidents of racism and allegations of illegal campaign spending since its launch.”  Sounds familiar, doesn’t it.

We should not forget who Farage is dallying with either. It only emerged a few months ago that he discussed the idea of fronting a global alliance of populist and far-right politicians being put together by the controversial former White House strategist Steve Bannon. Farage is even on camera as saying he would be keen to take the role of forming a group based around populism and “economic nationalism” that would align themselves with some of the worst authoritarians in politics today.

These people – Farage, Tice, Banks, et al – are the very public face of what’s gone wrong in Britain. It’s a con, a lie – one huge deception that somehow they are the representatives of the 17.4 million that voted to leave the EU.

No-one voted in the EU referendum for the Britain of today. In the 1980s – 86 per cent of the adult population were proud to be British. Today, no less than 90 per cent of the adult population feels that Brexit represents little more than a national humiliation and 45 per cent of Britain’s young (18-24) are no longer proud of their home nation. Another 34 per cent say they no longer care one way or the other and 10 per cent are actively embarrassed to call themselves English. That is what Brexit has brought us.

As Jonathan Lis, Deputy Director of the think tank British Influence quite rightly puts it because this is exactly what has happened:

“What was billed as a way for people to take back control of democracy has become a systematic attack on every institution which underpins it.”

And the very people doing that damage are Farage, Tice, Banks and so on.

The Brexit being offered today does not look remotely like anything sold to the public. And don’t think that people can’t operate such huge con-games. From the Parmalat boss who stole 800 million euros before Europe’s largest bankruptcy to Enron, the world’s biggest fraud, con-artists have managed to hoodwink even the most privileged and powerful – let alone ‘ordinary people.’

On some level, I feel sure that Nigel Farage really did and maybe still does believe in leaving the EU to take back national sovereignty – but I also feel that not even he expected his wet dream to become reality, and as they say – “Power tends to corrupt, and absolute power corrupts absolutely. Farage and his fellow hedge-fund banker boy travellers also know that Brexit is a con trick.

If Brexit is extended – Commissioner Farage?