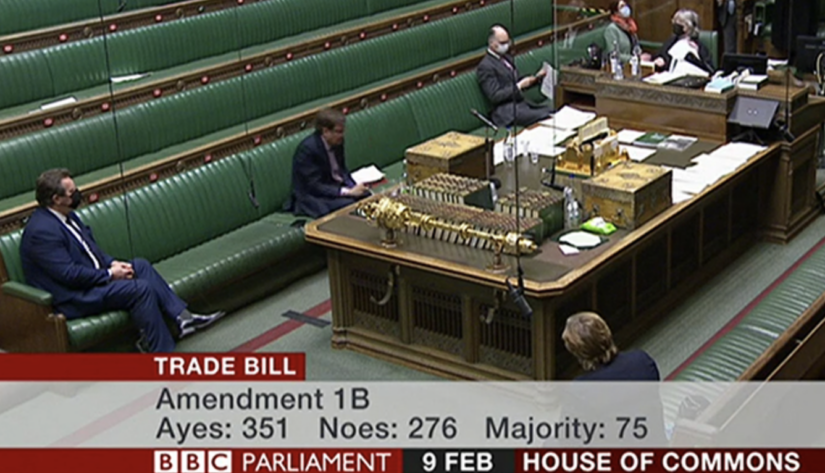 By Jonathan Stevenson: Last week, MPs once again voted down an amendment to the Trade Bill which would have given MPs a guaranteed vote on future trade deals, by a majority of 75.

The vote was almost entirely along party lines, with all but a handful of Conservative MPs voting against, and all opposition parties voting for. Just 13 Conservative MPs rebelled to support the amendment, two more than last time but far short of the number required for it to pass.

It leaves the UK with LESS democratic scrutiny of trade deals than all of the European Union, the United States and Japan.

And it means there is no way for Conservative MPs to prevent the government from breaking its manifesto commitments to protect food standards and medicine prices in future trade deals. Boris Johnson is free to serve both up on a plate.

While the Trade Bill now goes back to the House of Lords for a further vote, we expect that this was the last chance MPs had to back a guaranteed vote. The Lords are now only likely to propose weaker measures which will fall far short of what is required.

All in all a terrible day for democracy – and a betrayal of the promise that Brexit would ‘take back control’ for Westminster. Instead, MPs have given away control in the most supine manner.

Trade deals today cover a vast range of topics, from the rules about the food we eat to the way our public services are run and how our data can be shared across borders.

While UK laws on all of these matters are normally subject to a vote in parliament, trade deals count as international treaties and so are subject to different rules, even if they override domestic laws.

As it stands MPs will have no power to prevent Boris Johnson making any kind of corporate-friendly trade deal he wants.

For a full explanation of the trade threat, see Trade Secrets: The truth about the US trade deal and how we can stop it by Global Justice Now director Nick Dearden.

A parliamentary vote on trade deals would be a powerful check on the government’s ability to sign away our rights and standards in a US or any other trade deal, but there is still all to play for in the trade negotiations themselves.

Opinion polls have consistently shown that the British public is largely opposed to sacrificing our food standards, medicine prices and public services on the altar of free trade, so while the government has retained the right to negotiate them away, we can still stop Boris Johnson in his tracks.

The trade campaign now moves beyond parliament into the media, into communities and (when the pandemic allows) onto the streets. We need to keep making these trade deals so controversial that the political cost of signing them is too high, as we did with TTIP half a decade ago.