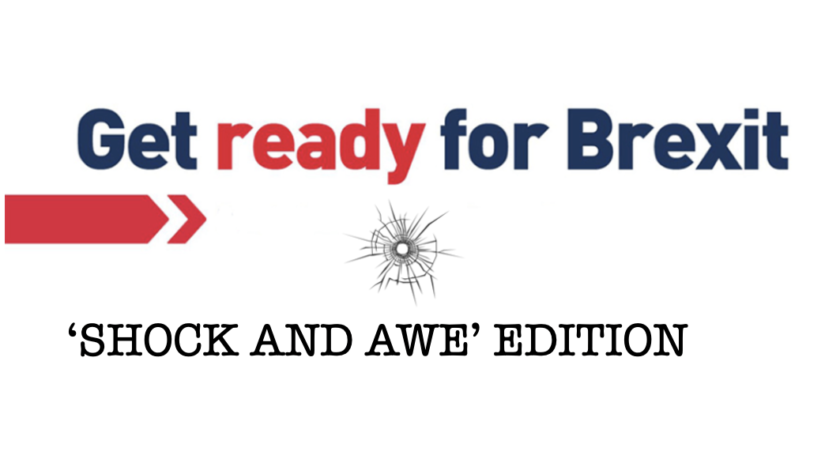 By TruePublica Editor: The governments’ overuse of militaristic, Churchillian and war-time cliches over Brexit and the pandemic is wearing thin and getting tiresome. But as Brexit day approaches, this is the mentality of a government obsessed with public relations. A mass propaganda invasion is to be aimed at every adult to overcome the Remainer enemy.

The tactics to be used will be based on behavioural science to get businesses and the public on side and to prepare for the end of the Brexit transition period.

The term ‘shock and awe‘, more often used to describe a military strategy of overwhelming force and closely associated with the disaster that was the Iraq war, is contained in a document setting out the government’s communications plan.

The information campaign is huge and is set to warn the public about the “consequences of not taking action,” before moving to a new phase focusing on avoiding losses as a result of the post-Brexit disruption.

If ever there was more evidence needed that the government themselves are pushing the country to a no-deal Brexit – this just adds more weight to it.

The plan forms part of a £multi-million advertising deal the government has struck with media agency MullenLowe London, reports politico.eu. This is the same outfit which has also been working on communications around the coronavirus pandemic. One might observe from the sidelines that communications throughout the pandemic has been a catastrophic failure on just about every level. The contract was found on the Tussell government procurement database.

Britain is set to leave the transition period on December 31, even if it fails to strike a trade deal with Brussels. Either way, there is expected to be new administration and checks on cross-border trade next year, as well as action needed by EU nationals in Britain, British nationals on the Continent and other groups in order to avoid disruption.

“The Transition Campaign is the most important government campaign this year,” says a tender document. It says the ‘advertising blitz’ will begin in July and could stretch as far as May 2022.

Be ready to be ‘nudged’ or ‘shoved’ because this is in the plan, which split the publicity campaign across four “bursts.” Between July and August, there will be a drive to “nudge” or “shove” people to take action by warning of the “consequences” of Brexit, before moving to a “shock and awe” approach between September and November.

When we get to December when the realisation of Brexit is a reality, the propaganda campaign moves into the “loss avoidance” stage and in January, the indoctrination programme then moves to the final stage called “new opportunities.” By the end of the first quarter of 2021, most people will then know most of Brexit contained more ‘losses’ than ‘opportunities’ and will probably look to shifting blame onto Boris Johnson and Co as the economy does exactly what the governments’ own economic forecast said – ‘decline for a decade.’

It won’t be of much a surprise to learn that this cunning plan was drawn up with the help of so-called behavioural experts after the “Get Ready for Brexit” campaign, which sought to prepare people and businesses for Brexit throughout last year. That plan was heavily criticized by the National Audit Office so, no doubt we can expect more of the same.

Internal government data from October last year showed 61 per cent of businesses had not even looked for information on how to prepare for a no-deal scenario. The government said the numbers showed “there must still be a large degree of complacency amongst businesses.”

By May this year, business leaders were panic-struck over how to deal with the pandemic and then Brexit when in survival mode. The most recent survey of the general public found that the majority (55%) believe Brexit should be delayed to allow businesses time to adapt given issues caused by the pandemic.

Government research showed businesses are reluctant to take action without certainty, which is understandable given the circumstances. Those businesses working in cross-border trade were also more likely to prepare because of their concerns about the impact of Brexit. The government noted that because of their worries they “will not respond well to overly positive messaging.”

Meanwhile, it should be noted that the report also stated that Brexit voters are “less likely to prepare as they don’t believe in any potential negative consequences of leaving.”

Polling in January this year showed 74 per cent of U.K. adults had done nothing to prepare for leaving the EU and did not plan to. Eight per cent had taken action and 9 per cent intended to do so. This means the campaign needed to convince people that Brexit is going to have a big impact on the country will need to be both large and sustained.

The behavioral science team will use some nongovernment channels to convey messages because “people have a higher level of trust in third parties and peers than they do in government.” In other words, most people do not believe what the government says – trust has fallen to all-time lows after the chaos and confusion caused by government miscommunications and poor handling of the pandemic.

The document stated: “With nine months to go, now is the time to ensure that clarity and certainty is communicated wherever possible about what will happen at the end of the year. Therefore we need to frontload preparation wherever possible, and ensure that any early misunderstanding is ironed out and appropriate actions are taken.”

The communications drive to prepare businesses and citizens is one of five “strategic goals” of the overall government plan for quitting the EU institutions at the end of this year.

Another goal is to convince the EU that the U.K. is ready to leave the transition period without a deal, while others include minimizing short term disruption and implementing necessary changes.