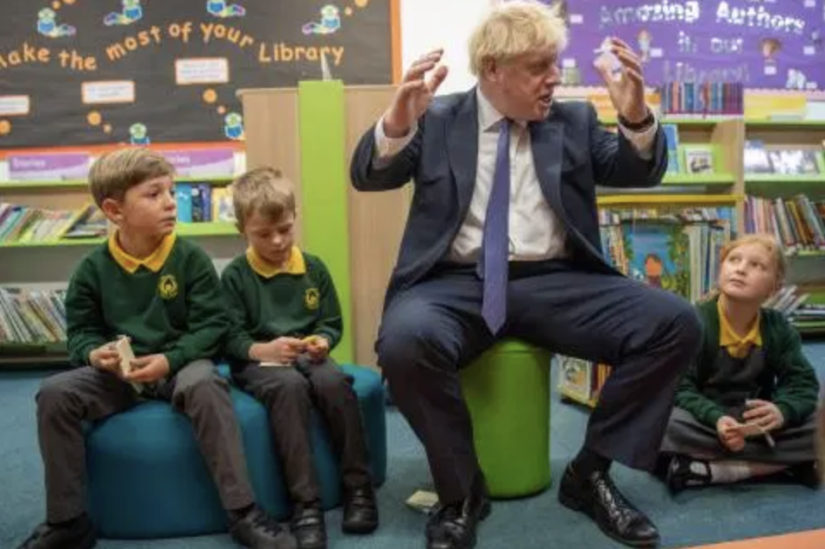 By TruePublica: It was Peter Oborne who recently said that – “I have been a political reporter for almost three decades and have never encountered a senior British politician who lies and fabricates so regularly, so shamelessly and so systematically as Boris Johnson. Or gets away with his deceit with such ease.” And yet, the lying continues. The establishment media are complicit in their obvious silence over scandals that in normal times would bring down an entire government let alone its inflammatory Prime Minister. After all, where is the Russia Report or investigation into Johnson’s affair with Jennifer Accuri and its allegations of malfeasance? Not content with lying to the nation on a grand scale, more subtle forms of propaganda are currently being used against the public – and at taxpayers expense.

Back in September, a presentation on Boris Johnson and his Brexit stance was broadcast to hundreds of digital noticeboards in primary schools in what amounted to a propaganda campaign. After being aired, the campaign sparked outrage among parents and when they cottoned on, some MPs as well. The messages were streamed onto 3,000 digital noticeboards in primary schools “without the prior consent” of headteachers. Its messaging included the image of a Union Jack and Boris Johnson and captions such as promising to put more money into schools and then “He [Mr Johnson] wants to unite the UK” and “He has promised he will get Brexit done.” They went further, with yet more propaganda by promising to put more money into the NHS and 20,000 police officers back on the streets.

The government used a company to create the effect they had little to do with it and when they got caught they said the slides were from a wider educational presentation about British prime ministers, adding that it also covers arguments over Brexit. The trouble was that they were totally one-sided, in favour of Boris Johnson. The company, ironically called Anomaly, refused to show the full extent of the programme and by all accounts who had paid for them and to what extent.

It is understood that Anomaly runs content on school noticeboards covering issues such as British values, anti-bullying and healthy lifestyles.

It goes to show the extent of the propaganda campaign against the general public when parents of primary schools are targets of the government. One wonders how much this cost the taxpayer and why the company producing has not been forced to show all of the information salient to it in the public interest.

Completely undeterred, Ministers have now been accused of blowing more than £100,000 on a “propaganda” website about school funding.

A new website has appeared, which attempts to compete with SchoolCuts, a search engine that allows parents to look up how much cash their children’s school budget has been slashed by.

However, unlike SchoolCuts, which is run by teaching unions, the government’s own website ignores the impact of inflation, increases in staff pay and other costs. SchoolCuts shows how much funding has decreased in real terms since 2015, the government’s Skills Funding site only accounts for changes between 2019/20 and 2020/21. In other words, it is misleading in content and context.

The research behind SchoolCuts has been declared a fair representation of the state of education funding by the independent Institute for Fiscal Studies. The governments’ version has not.

Kevin Courtney, Joint General Secretary of the National Education Union, said: “The School Cuts website run by the National Education Union gives parents the information they need to see what the real picture for funding is in their school. However, the Government’s website doesn’t account for inflation and it only shows changes since 2019 – ignoring all the cuts the Government has made since 2015.

This is another clear-cut case of propaganda generated by the government at the expense of the very people who pay for it.

Leaving aside primary schools and falsifying numbers there was the video that had the feel of modern-day war propaganda output that Boris Johnson was facing questions about last August over a new government promotional video that opponents said breached strict civil service impartiality rules. This piece was pushed out before Boris Johnson had announced the general election. At the time, Labour’s deputy leader said the film was “a blatant election campaign video“ that should not be funded by taxpayers’ money.

The video shows Mr Johnson speaking in Downing Street about his priorities as prime minister, including investing in policing, health and education. It is set to a certain type of music associated with winning wars and war heroes – and features sweeping images from around the UK and footage of Mr Johnson meeting members of a concerned public that he was listening to. This was supposed to be an official government broadcast.

The film is marked with No10 branding and was tweeted from 10 Downing Street and masses of social media accounts, along with Mr Johnson’s personal accounts. So widespread was this video that you must have seen it.

It was indeed blatant election campaigning. A full-on propaganda video from the Tory leader and again, taxpayers should not be footing the bill for it.

All this goes along with the fact that Boris Johnson is setting up a film factory to present his Brexit ideology to the populace in a determinedly positive and romanticised way. “The idea is to put up films online and elsewhere that show the human triumphs of Brexit and we’re now actively recruiting the best film professionals available. New cash is being made available and existing resources are being diverted from the old-fashioned media operations that churned out press releases for the legacy publications.”

The whole purpose of this exercise, as we wrote a couple of weeks ago – it to whitewash history and show – “the human triumphs of Brexit.” Although Dominic Cummings will play a key role in setting up the film unit, it’s very much Johnson’s brainchild. So be prepared to have yet more propaganda thrown all over your social media accounts – at your expense.

And here’s another lie. Michael Gove said “I’m not aware of any adverts that we publish that have been misleading” – just as an advertising blitz on Facebook between 1 and 4 December, running thousands of ads targeted at key voters and constituencies. Of these, no fewer than 88 per cent had been criticised or denounced as misleading by the independent fact-checking organisation Full Fact!

(Main Image – Subliminal propaganda? Prime Minster, primary school children and a background poster saying “make the most of your library.” A recent annual survey shows sharp cuts to local authority funding have led to the loss of 800 libraries across the country since 2010. Would this image have been used in MSM headline articles if the poster had said anything about library closures?)