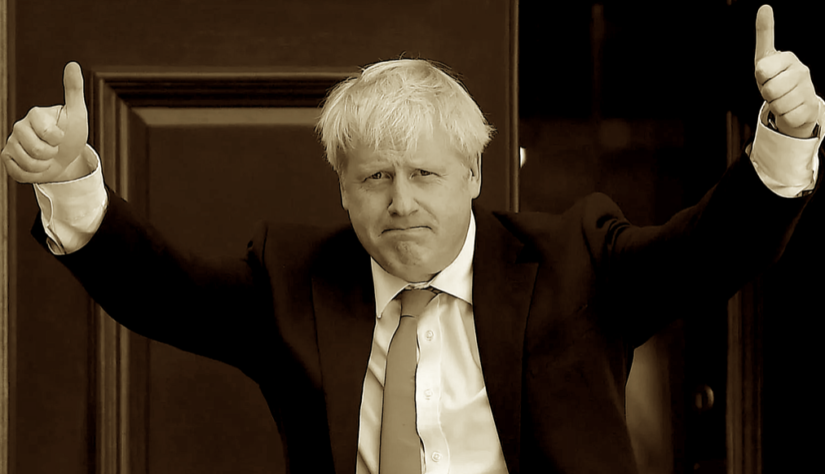 By TruePublica Editor: Dan Brown, author of the Da Vinci Code once wrote – “History is always written by the winners. When two cultures clash, the loser is obliterated, and the winner writes the history books – books which glorify their own cause and disparage the conquered foe. As Napoleon once said, ‘What is history, but a fable agreed upon?”

I would like to think this was a fake news story but sadly, it is not. And so it is that history will be written by the winners and the loser will be obliterated. The clash was the 52% against the 48.

Many of us who feel that the December election was confirmation of the collective insanity of an entire country prepared to shoot itself for an ideology that is already failing – know they have no leg to stand on. The country voted for Brexit twice. For the 48 per cent, the pain of being written out of the battle for Britain’s future will be too much excruciating even.

Boris Johnson is setting up his own film factory to present and preserve his Brexit ideology to the populace. Its purpose is to show Brexit in a positive, idealised and romanticised way. This was a battle that Boris won in Churchillian fashion with toil, sweat and tears – it was, as will be told, his finest hour. This is gloating on a phenomenal scale and will do nothing to unify the country.

Tim Walker at the New European reports of a contact from the inside this latest government propaganda exercise as saying:  “The idea is to put up films online and elsewhere that show the human triumphs of Brexit and we’re now actively recruiting the best film professionals available. New cash is being made available and existing resources are being diverted from the old-fashioned media operations that churned out press releases for the legacy publications.”

In other words, social media is to be flooded with this crap at public expense – and people will believe it.

Although Dominic Cummings will play a key role in setting up the film unit, it is very much Johnson’s brainchild. In 2018, as mayor of London, he commissioned an astonishing 168 “official information films”, all, needless to say, starring himself. From the banks of the Amazon to the merits of Britain’s border force.

However, serious actors and filmmakers should be wary of involving themselves in this type of propaganda as it may well come back to haunt them.

As Walker says – “I well remember interviewing the late actor Sir Anthony Quayle, and, when I asked him if he ever regretted narrating Conservative party broadcasts, he looked dolefully out of the window and brought the interview to an abrupt halt.”

The fight to stay in the European Union in now lost and Boris Johnson intends to show the world how great he is, how he brought the nation together, how he unified us all and how great Britain really is.

The worst elements of the ‘remain’ campaign will, of course, be highlighted as the foe that needed defeating in this great Brexit battle of Britain.

What won’t be shown is the extent of the Cambridge Analytica scandal, the billionaires who quietly and often illegally bankrolled the Brexit campaign, the ongoing Russia report scandal, funding by dodgy donors, peerages for cash, the use of right-wing bully boys and sheer scale of criminality deployed. This propaganda fest won’t tell anyone about the money-laundering bankers and hedge funds who, with the help of corrupt pollsters defrauded the nation of the real statistics, or the lying, fake news, and distribution of misinformation by our own government.

The uncomfortable truth will be excluded and written out of really happened.

In the meantime, the government is pressing ahead with plans for a ‘festival of Brexit Britain’ in 2020 at a cost of £120 million.