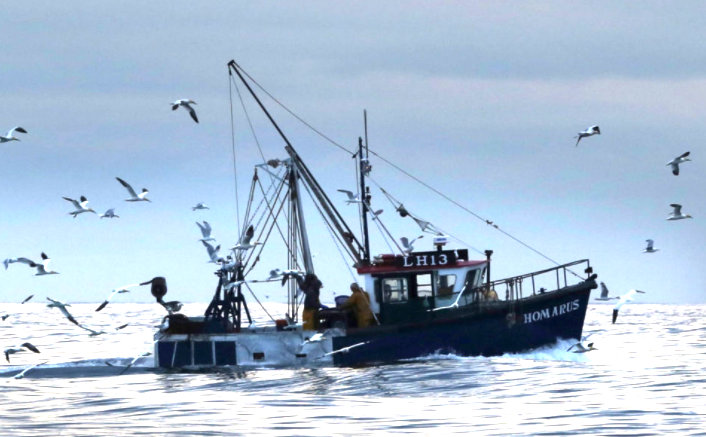 By David Powell – New Economics Foundation: It should not come as a particular surprise to learn that many of the promises made by the Leave campaign are turning out to bear little relationship to reality. As with £350 million a week for the NHS, so with fishing.

On World Fisheries Day, it’s worth remembering the teetering promises that have been made to the UK’s struggling small fishing boats. One of the most iconic moments of the whole unseemly squabble was Nigel Farage’s sailing up the Thames of a flotilla of small boats from around the UK, ostensibly to demand the retaking of control over our fishing waters from those meddling Eurocrats. The Government has since promised a ‘sea of opportunity’ for the industry. Fishing, despite its tiny absolute contribution to UK GDP (less than 0.1%), has been drenched in jingoism pretty much from day one. Such is its totemic symbolism for the relationship we have with Europe: it is at the literal front line of our future relationship with the EU.

But reality is irksome, because it’s complicated. There is no ‘UK fishing fleet’, but a diverse assortment of different types of fishers, with very different practices, species, needs and economics. While huge boats hoover up most of the fish – and profit – things are rather different for smaller boats. Leaving the EU adds complication upon complication.

The sad reality is that Brexit will almost certainly leave most fishing communities worse off than they were before. Major new research published by the New Economics Foundation last week shows the extent of this grim prognosis. Brexit may give with one hand, but take away at least as much with the other; we might reclaim ‘our’ waters – a concept that doesn’t make much sense to a fish that spends its life moving freely across the North Sea – but instead face crippling new tariffs on export to the single market.

Our report, Not in the Same Boat, analysed six possible scenarios from Brexit. Only under one – the distinctly unlikely outcome of the UK prioritising the fishing fleet in negotiations over just about every other sector in the economy (like, er, the banks) – do all UK boats look like they do better. Otherwise it’s a tale of an exacerbation of the existing gulf between the haves and have-nots, the powerful and the powerless; the chances are that smaller boats without fishing quota, so emblematic to the entire story of the Leave campaign in the first place, will fare worst of all.

Most analyses of the potential for fishing under Brexit are somewhat simplistic, unlike Brexit itself. Take trade: approximately 75% of the UK’s fish are exported, of which 75% is to the EU. Norway, which has the closest trading relationship with the EU for fish products, still pays tariffs on 70% of its exports to the bloc.  For boats reliant on export, especially the quota-less boats targeting shellfish, the economic tailwind of some boats getting increases in quota could be blown out of the water by new tariffs.

So much for bluff posturing. The scary reality is already starting to bite in ports like Grimsby, recently reported to have requested the creation of a special free trade area with the EU. That kind of thing requires an exceptionally high priority to be placed upon the UK’s fishing industry in negotiations: how likely is that? The affections of the Brexit Secretary, David Davis – who prefers to tout special freedom of movement for UK bankers– appears to be elsewhere.

Undeliverable promises also risk overfishing, under which no one wins. The UK only gets to increase its share of fish stocks that will continue to be shared with the waters of other EU countries if those countries voluntarily back down – the Danish, at least, aren’t in the mood for that, and nor are the European Fisheries Alliance. The EU’s Common Fisheries Policy (CFP) shared responsibility for keeping fishing at sustainable levels, and despite what many think, most fish stocks are recovering. We need something that basically does that job, in an adult and conciliatory manner, or it’s less fish for everyone, and the decimation of fish populations.

For all the bashing of the CFP, the particular irony is that it was always the UK government that was primarily responsible for the travails of smaller boats. Westminster – not Brussels – decided to give just 1.5% of the total rights to fishing quota to the 77% of the fleet made up  of boats under 10m in length.

Improving the lot of the fleet as a whole will need additional, deliberate UK policy intervention, just as it always did. One of the central recommendations in our report is that any new fishing quota that does come the UK’s way should be allocated according to a set of criteria: give new quota disproportionally to those that have lost out, practice the most sustainable fishing methods, or return the most value to the supply chains of coastal communities. That’s not current government policy.

As MPs grapple with the EU (Withdrawal) Bill – so far refusing to accept amendments to put precautionary environmental principles at the heart of post-Brexit law – the most important recommendation of all holds true not just for fishing but for Brexit in general: drop the sabre-rattling, and put people and planet first. Nobody wins if we promise to take rights to fish that the EU has no intention of letting go voluntarily. Overfishing is, after all, the ultimate destroyer of fishing communities – something that the Common Fisheries Policy, after years of getting it wrong, was finally starting to get right.