How corrupt is the British government? 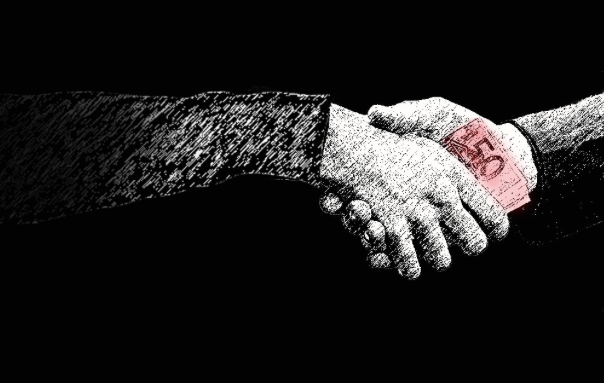 TruePublica Editor: This article first appeared on TP on 5th August 2015. What is interesting here is reading this in the context of the most important post-war electoral decision Britain has made – Brexit.

Don’t forget that it was hedge funds who massively profited by shorting Sterling on the run-up to the EU referendum with insider information from the pollsters who told everyone that Remain would win when they knew this not to be the case. Don’t forget that American corporations have been heavily instrumental in covertly shaping healthcare and welfare government policy or that Brexit means that the climate deniers, funded by the fossil fuel industry want the UK out of a regulated EU.

Lastly, don’t forget, there is a push for a no-deal Brexit, thus enabling the final goal – the Americanisation of Britain. Billionaires, bankers, lobbyists, think tanks and global corporate transnationals have all played their part. Read on.

There is no limit or cap on the amount a permissible donor can give to a political party in the UK.

The result is that a spotlight has been thrown on the Conservative Party’s close links with the hedge fund industry, as research showed that around half of the wealthiest fund managers in Britain have given money to the Tory party, with the accusation that David Cameron was fashioning government tax policy in the interests of the sector.

The research into hedge fund managers’ political donations, based on public disclosures, found that of the 59 wealthiest asset managers included on the most recent Sunday Times Rich List rankings, 27 had made a combined £19m in donations to the Conservatives, with £10m flowing into Tory coffers since the 2010 general election alone.

In 2011 the Bureau of Investigative Journalism reported that the financial industry accounted for around 50 per cent of all the party’s cash donations in 2010, up from 25 per cent in 2005. Around three-quarters of Labour’s donations come from the trade unions, which the Tories are trying to stem.

And the donations strategy appears to be working for the bankers. George Osborne has forced out the tough-talking head of Britain’s financial watchdog after he angered the banking community with a string of record fines. Martin Wheatley quit as chief executive of the Financial Conduct Authority after he was told earlier this week by the chancellor that his five year contract would not be renewed next year.

Yet, as is being screamed loudly on some newspaper front pages, no banker has gone to jail in the UK for anything – not for the greed that almost brought the entire economic system of the world to a grinding halt; not for mis-selling financial products to unsuspecting customers; and not for fixing key benchmark interest rates and currency prices. Not even for laundering the money of the drug barons who have murdered thousands of innocent civilians who had the misfortune to be in their way.

Last November it was revealed that 71 coalition MP’s stood to gain from privatising the NHS. A new a dossier of disgrace published by Unite, Britain’s biggest union reveals that 71 coalition MPs with links to private healthcare interests voted to sell-off parts of the NHS. Len McCluskey, Unite general secretary said: “The sheer scale of this conflict of interest is staggering, but it is the ongoing sell-off of our NHS that makes this the real scandal for our democracy.

The Conservatives have even accepted a £50,000 election campaign donation from a senior city banker accused of being “grossly incompetent” by the party’s own chairman of the Parliamentary Commission on Banking Standards. The size of the donation entitles Mr Wilmot-Sitwell to membership of the Conservative “Leaders Group” that meets with David Cameron and other senior party figures for meals and drinks. Wilmot-Sitwell was lambasted by a cross-party Parliamentary investigation into banking misconduct for his role in the failure to prevent the manipulation of Libor rates for profit when he was global co-head of UBS Investment Bank. UBS traders were deeply involved in Libor-fixing, leading to a $1.5bn (£1.01bn) fine.

Billionaires, bankers and lobbyists who received £12,000-a-table access to David Cameron and other senior Cabinet ministers reveals that almost 450 attendees at last summer’s glittering Tory fundraising dinner had a combined wealth of more than £11billion.

The conservatives have also been receiving donations from wealthy Russians who have taken British citizenship at that same table – foreign donations are banned under UK law but that didn’t stop the party from accepting £1.2million from them.

The Tory party are amassing funds to the tune of £50million just from bankers during the course of one parliament – and this was last time around and it is bound to be escalating.

Politicians have no sense of fairness or irony. As a consultant doctor, if you are given anything more than a diary from a pharmaceutical company this has to be declared as it may represent a conflict of interest. The same goes for many senior people in positions of power in companies, such as directors.

However, the situation in America has just got a whole lot worse for democracy. Thom Hartmann interviewed former U.S. President Jimmy Carter, and, at the very end of his show (as if this massive question were merely an afterthought), asked him his opinion regarding recent decisions in the U.S. Supreme Court. The two historic decisions referred to the enabling of unlimited secret money (including foreign money) now to pour into U.S. political and judicial campaigns.

“It violates the essence of what made America a great country in its political system. Now it’s just an oligarchy with unlimited political bribery being the essence of getting the nominations for President or being elected President. So, now we’ve just seen a subversion of our political system as a payoff to major contributors, who want and expect, and sometimes get, favours for themselves after the election is over. … At the present time the incumbents, Democrats and Republicans, look upon this unlimited money as a great benefit to themselves.”

The issue that Carter refers to is democracy itself. In a recent study, the author of ‘The US Is An Oligarchy Not A Democracy’ stated: “The clear finding is that the U.S. is an oligarchy, no democratic country, at all. American democracy is a sham, no matter how much it’s pumped by the oligarchs who run the country and who control the nation’s ‘news’ media”.

The UK is starting to resemble a sham democracy just as Carter implies. Immediately after being elected, David Cameron got to work on the biggest crackdown on trade union rights for 30 years, including new plans to criminalise picketing, permit employers to hire strike-breaking agency staff and choke off the flow of union funds to the Labour party.

The scale of the reforms goes far wider than the previously trialled plan for strikes to be made unlawful unless 50% of those being asked to strike vote in the ballot. As Paul Kenny of the GMB Union said “It is clear the Tory party high command intends to make Labour bankrupt by cutting off the main source of funding”.

The purpose behind the plan is quite simply to kill off the competition and to retain power by any means. These are the tactics and strategies of authoritarian states commonly known today as either a ‘guided’ or ‘managed’ democracy. The state then functions as a de facto autocracy. Such governments are legitimized by elections that are free and fair but do not change the state’s policies, motives, and goals.

In Transparency International’s Global Corruption Barometer 2013, 90 per cent of respondents believed that the UK Government is run by a few big entities acting in their own interest – and that was before the Tories gained control of parliament.

“it is correct to say that in some areas of UK society and institutions, corruption is a much greater problem than recognised and that there is an inadequate response to its growing threat. Corruption is often met with complacency, and that key institutions are refusing to confront the problem. Of particular concern are prisons, political parties and parliament”.

How corrupt is the British government? The Tory party is funded by the very people who have enacted and facilitated some of the worst crimes in history. The financial services industry has become a pervasively unethical and highly criminal industry, with massive fraud tolerated by the very lawmakers who are supposed to regulate them and protect its citizenry.

Corruption is now endemic throughout the entire British system. Austerity policies caused a huge rise in the use of food banks, the cost of living, poverty, privatisation and the selling of state assets accumulated over generations. And it has crime as its centre of gravity via politicians who refuse to bite the hand that feeds them.

There is hardly a day that passes without some sort of scandal centred around parliament, so many in fact, we are losing track of them. A quick look at Wikipedia and you’ll see that each decade has brought more and more scandal, illicit behaviour and crime straight from the heart of our so-called democracy.

It makes you wonder where all this will lead in the end. On its current trajectory, perhaps Britain will one day look like little America, a western outpost on the edge of Europe. An awful prospect!