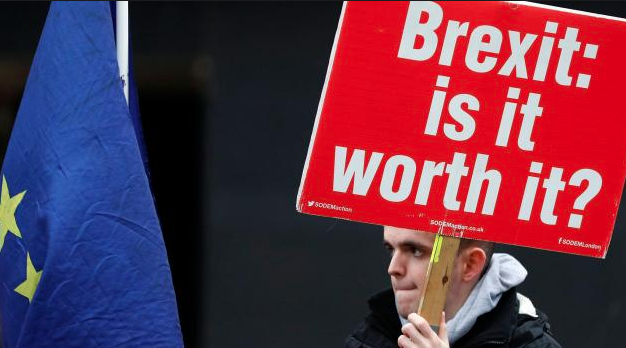 By TruePublica – As the political paralysis of Britain’s parliament continues in deadlock, the reality of a no-deal Brexit means the UK would leave the European Union (EU) in just a few weeks time – immediately on 29 March 2019, and there would be no agreements in place about what the relationship would be like in future. It is predicted by many experts in this scenario that Britain would effectively suffer an economic seizure, predominantly caused by frictionless trade and transport having broken down. The true effects of this are not fully understood but it is clear the security apparatus is gearing up for trouble on the streets of Britain.

Last Tuesday, MPs finally voted to block a no-deal Brexit after passing an amendment which rejects the UK exiting the EU without a Withdrawal Agreement. The amendment was tabled by Tory Dame Caroline Spelman and won by 318 votes to 310. However, the result of that vote to block a no deal is not legally binding, and whilst it places pressure on Theresa May to secure a deal acceptable to MPs, she has stubbornly continued down one line, listening to no-one even when defeat is evidently staring at her in the face.

Matter have now got so serious that British officials have revived Cold War emergency plans to relocate the royal family should there be riots in London if Britain suffers a disruptive departure from the European Union next month, two Sunday newspapers reported.

You can see how serious the threat of a no-deal Brexit is becoming through the continual ramping up of the security services. On December 18th, it was reported that a total of 3,500 troops will be put on standby for any potential crisis triggered by a no-deal Brexit.

Not satisfied with that number, On January 17th, Ministry of Defence officials then confirmed that this number was to be significantly stepped up as the EU withdrawal date edges closer.

Then Ministers decided to “issue a formal notice calling up British army reservists to help tackle the impact of crashing out of the EU “on the welfare, health and security of UK citizens and economic stability of the UK”.

The purpose of these announcements was to ensure there are “effective and proportionate contingency plans in place.”

On January 30th, Scotland’s chief Police constable decided the matter was a problem on his territory and said that up to 400 Scottish police officers could be deployed to deal with the consequences of Brexit. The purpose was again to cover for potential public disorder, disruption at ports and airports, and rather more ominously, the ‘need to send officers to be deployed to Northern Ireland’.

On January 29th, IntelNews reported that Britain’s domestic Security Service (MI5) has over 700 officers —more than 20 per cent of its entire force now stationed in Northern Ireland, due to fears that the Brexit process might reignite the centuries-long sectarian conflict there.

Intel News is a specialist service offering commentary on intelligence and espionage. It goes onto to describe a basic history of ‘the troubles’ and why the security services are co concerned.

In 1922, nationalist rebels managed to dislodge Ireland from the British Empire. But six counties in Ireland’s north remained under British dominion, and today form the British territory of Northern Ireland. Irish nationalists have for decades engaged in an unsuccessful campaign —at times peaceful and at times violent— to unite these counties with the Republic of Ireland.

Following the Good Friday Agreement of 1998, nationalist and British loyalist groups in Northern Ireland terminated their armed operations and entered the political arena, effectively sharing power in the British territory. The integration of Ireland and Britain into the European Union helped in that process by effectively bringing to an end to border checks between the two countries. Thus, pro-British loyalists continued to live under British rule, while nationalists have been able to cross from Northern Ireland to the Irish Republic and back without restrictions as if the two states were effectively unified.

But this open-border regime is about to change once Britain leaves the European Union in March. Many fear that the reinstated border will remind nationalist communities in the North that the island of Ireland remains partitioned and will thus reignite secessionist sentiments.

An unnamed “counterterrorism source” who said that MI5, Britain’s primary counterterrorism agency, had stationed a fifth of its force in Northern Ireland. The agency is allegedly monitoring a number of dissident republican groups —a term used to describe armed groups of Irish nationalists who continue to reject the nationalist community’s majority view to endorse the Good Friday Agreement back in 1998.

One such group —which is commonly seen as the most formidable in existence today— is the self-described New Irish Republican Army. The New IRA was formed in 2012 when dissident republican cells joined another dissident nationalist group, known as the Real IRA. The new formation is particularly strong in Northern Ireland’s extreme northwest, which includes urban centres like Derry. British security officials believe that the New IRA consists of about 40 hardcore members who are committed to an armed campaign against British rule in the North.

Nearly 50 New IRA militants are currently serving sentences in the British and Irish prison systems, while several raids of New IRA members’ residences and other properties have unearthed weaponry —including fully automatic weapons— and explosives.

But the group managed to detonate a car bomb in Derry on January 19 of this year. The bomb employed gas canisters and went off nearly 30 minutes after an unidentified man called a charity shop located nearby and issued a bomb warning. Police officers rushed to the scene and were there when the bomb exploded. There were no injuries, according to reports in local media.

There will be no 21-month transition period if the no-deal scenario takes place.

It is not just public disorder that a no-deal Brexit brings. There are other serious implications that Britain is not prepared for. For example, rules around things like fishing rights, air traffic and nuclear regulation will all change overnight and this makes no mention of 1.3 million Brits in the EU and 3.2 million Europeans in Britain. The list of possible problems seems almost endless and it is difficult to work out what is propaganda, project fear and the likely truth.

In the light of all this concern, hardline Tory Brexiteer, known as one of the ‘ultras,’ Sir John Redwood has said Britain could experience a “big economic boost” by not having to pay into the EU. “There are huge agendas of opportunity, which are being crowded out by endless remain propaganda from people who tell us falsehoods about what might happen if we just left,” he said.

And as Simon Wren-Lewis, Emeritus Professor of Economics and Fellow of Merton College, University of Oxford said last week:

“The days when Leavers were talking about the sunlit uplands are over. Liam Fox has not even managed to replicate the scores of trade deals the UK will lose when we leave the EU. As to independence, Leavers just cannot name any laws that the EU imposed on the UK they do not like.”

The clock is ticking – we’ll soon find out who is right and who is wrong!