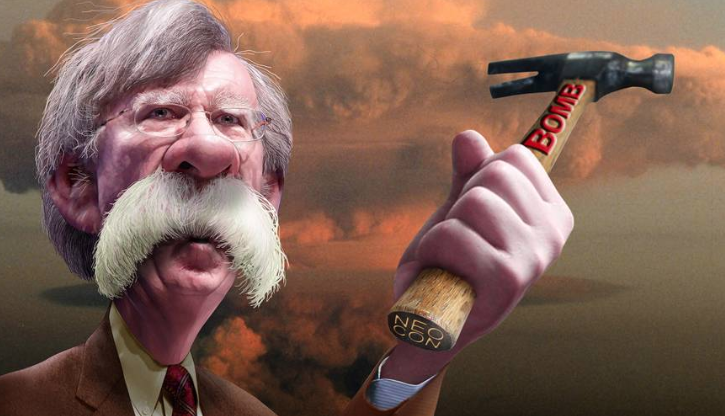 From 2013 until last month, John Bolton was the chairman of the Gatestone Institute, a New York-based advocacy group that warns of a looming “jihadist takeover” of Europe leading to a “Great White Death.” The group’s authors have also appeared on Russian media, including Sputnik and RT News, criticizing mainstream European leaders like French President Emmanuel Macron.

The group has published numerous stories and headlines on its website with similar themes. “Germany Confiscating Homes to Use for Migrants,” warned one from May 2017, about a single apartment rental property in Hamburg that had gone into temporary trusteeship. Another from February 2015 claimed the immigrants, for instance, Somalis in Sweden were turning that country into the “Rape Capital of the West.”

Gatestone is “a key part of the whole Islamaphobic cottage industry on the internet,” said Ibrahim Hooper, spokesman for the Council on American-Islamic Relations, a civil rights and advocacy group. Hooper added that Bolton being associated with Gatestone, “and in one of the most powerful positions on the planet, is very disturbing.”

The NBC report also says: Alina Polyakova, a Brookings Institution fellow who studies far-right populism and disinformation campaigns in the European Union, said Gatestone is “putting out content that was clearly anti-immigrant, anti-Muslim and was echoing some of the Russian disinformation propaganda” being spread by internet trolls and on social media.

Gatestone has been a significant promoter of the disputed notion that “no-go zones” exist in the heart of major cities where Muslims rule by Shariah law. In January 2015, then-Gov. Bobby Jindal of Louisiana, a Republican, cited Gatestone’s research in a speech in London.

In September 2015, Fox News contributor Steve Emerson, who’s also written for Gatestone, said in an appearance on the network that the British city of Birmingham is a “no-go zone” for non-Muslims. The claim prompted the British broadcasting regulator Ofcom to find the network in breach of its broadcasting code. Emerson later apologized.

One of the retweeted stories that Gatestone instigated claimed that 500 churches in London have closed while 423 new mosques have opened, which went viral and was picked up by numerous websites including Breitbart News. The fact-checking website Snopes.com said Gatestone used “shoddy research and cherry-picked data” for the story, which was clearly not true.

Gatestone is in part funded by the William Rosenwald Family Fund, which funds a host of pro-Israel groups including the Middle East Forum.

Gatestone has also received financial backing from Robert and Rebekah Mercer, the billionaire father-daughter team who have supported conservative candidates in the U.S. including Cruz and Trump. The Mercers also co-founded Cambridge Analytica, the data company being scrutinized for its activities that have allegedly influenced the Brexit EU referendum. The British High Court granted the Information Commissioner’s Office a warrant to search Cambridge Analytica’s London offices in March. There are now a number of court action and libel cases currently in play.

In an archived 2017 web page, Rebekah Mercer was listed as a member of the Gatestone Board of Governors.

Notes via MediaBias/FactCheck: The Gatestone Institute, formerly Stonegate Institute, is a “not-for-profit international policy council and think tank based in New York City” with a specialization in strategy and defense issues. Gatestone Institute is  anti-Islamic, pro-Christian and Jewish/Israel. Many of the articles will link back to sites that don’t say what they claim or make the same rash judgments, without proof. Example: Obama tells Christians to not protest in Egypt then has no quotes or sources saying he said that. (M. Allen 12/30/2016)