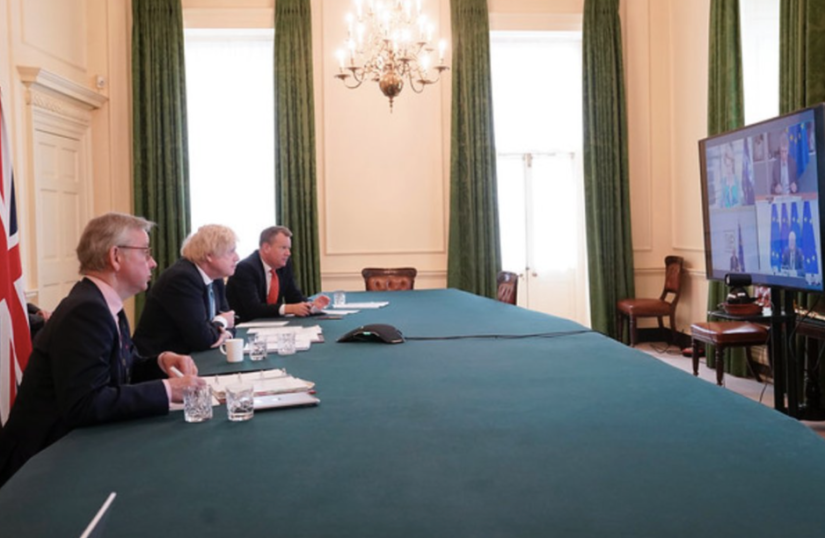 TruePublica Editor: Yes – the main image shows the scale of the governments’ latest endeavours to get a deal done with the European Union. Somehow this photo-stunt is supposed to provide renewed confidence to the electorate that all will be well because BJ and Michael Gove are at the forefront of leading the charge. It’s not hard to think Johnson is setting up EU negotiators to fail and then blame them for that failure, which will facilitate a desperate one-sided trade deal with the United States.

Boris Johnson has, as usual, decided that a slogan will urge European leaders to get a deal done by saying they must put a “put a tiger in the tank” as both sides vowed to find “fresh momentum” in stalled talks on Britain’s post-Brexit relationship with the bloc. That slogan was from a campaign that fossil fuel burner Esso used several decades ago before it decided that using an endangered species (tigers) to endanger another (humans) was not a great marketing campaign after all.

The Prime Minister on Monday was talking complete nonsense when he insisted that the two sides were not “actually that far apart” after a “high level” video conference call with leaders including European Commission president Ursula von der Leyen.

We are all told that Britain and the EU have both agreed to an “intensified” round of discussions in a bid to make progress on key areas of disagreement – even though the last four years of efforts has led to nothing more than a stalemate.

The two sides remain at loggerheads on a string of issues, not least Britain’s objections to a so-called ‘level playing field’ of rights and standards in any future trade tie-up; the basic governance of any trade deal with the EU. If that’s not too far apart, then we’ll be sipping cocktail’s with our alien friends from the planet Zorg located a mere 50 billion light-years away in no time at all.

In fact, EU negotiators had already drawn red lines in the sand in 2016 and they have stuck to those demands ever since. So far, it has only been Britain that has backed down – Northern Ireland borders, borders checks with the EU and so on.

Last week, against pressure from business campaigners and huge voter support for a Brexit extension, Johnson’s government formally ruled out extending the current transition period with the EU, which allows it continue accessing the bloc’s single market tariff-free until the end of the year. On January 1st, Britain will crash out of the EU trading bloc if no formal agreement has been agreed upon by all 27 members states.

There are now only two possible outcomes of Brexit between now and December 31st. The first is that a trade deal is done with the EU. If it is, it will be on their ‘red-lines’ demands because the EU cannot be seen to favour the UK right in the glare of its 27 members – all of whom have a veto to agreeing to it or not. That being the case – it’s a soft Brexit and Britain will have achieved the worst deal possible and be constrained by the EU in all the areas that Brexiteers voted against. If that happened, Britain would effectively be in the EU in all but name – and if that happened after four years of infighting – the range of domestic outcomes would be somewhere between political meltdown to civil society breakdown. The second and more likely is that no deal leads the UK into the arms of a trade deal with America.

Johnson’s so-called ‘high-level’ meeting is nothing more than state-generated propaganda. Being charitable towards Johnson, he may not even believe in Brexit but has backed himself into an impossible and very damaging no-deal corner because more than anything in this world – he wanted to be Britain’s PM. As one British senior diplomat once said – “never under-estimated the irrational things that jealousy or desire can make you do.”