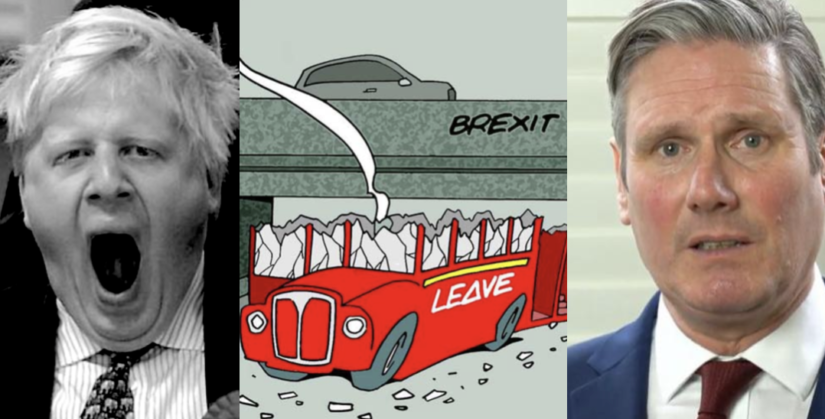 TruePublica Editor: Just four days ago – the bounce in public support for Boris Johnson at the peak of the coronavirus pandemic had started to fall away. The number of people who feel favourably towards for the prime minister dropped by 6 points since last month – when he was battling the virus in intensive care – to 45 per cent in May, according to a survey by Ipsos Mori.

But a week in politics is a long time.

The pandemic crisis is being managed badly. And the public have quickly turned against those that have demonstrated their inadequacy. Now, 47% of people surveyed by Opinium approve of Labour leader Kier Starmer, an increase of five points, compared to 17% disapproving (down one point).

By contrast, 45% of those surveyed approve of Boris Johnson, down one point, compared to 39% that disapprove of Johnson (up three points).

While Johnson is still perceived as popular, Starmer now has a 24 point net approval rating over the prime minister.

The leader of the opposition is on +30 points whereas Johnson is on +6 points in the net approval ratings.

To support this the Savanta Coronrvirus data tracker confirms that – “Following a difficult weekend for the Prime Minister, his Chief Adviser, and the government in general, approval regarding the government’s handling of the crisis, once exceedingly high, has taken a dramatic fall. The government’s approval rating is now at -2%, dropping 16 points in just one day, while the Prime Minister’s own approval is now also below zero (-1%), having dropped 20 points since the end of last week.”

“The government’s approval rating is now at -2%, dropping 16 points in just one day, while the Prime Minister’s own approval is now also below zero (-1%), having dropped 20 points since the end of last week.”

In another survey, Nicola Sturgeon has topped a Press Gazette reader poll asking which high-profile politician had been the most impressive during the Covid-19 crisis. This was on Press Gazette’s website from 13-18 May 2020.

The Scottish First Minister and leader of the SNP took 29% of the vote. She was followed by Chancellor Rishi Sunak at 24% and newly elected Labour leader Keir Starmer at 23%.

In the space of just one week, support for Boris Johnson and just as importantly, the government itself, has almost completely collapsed. And it looks like that will continue given the recent Dominic Cummings debacle, which the general public has decided smacks of elitism. Johnson is now being viewed by the public as a lightweight that can only cope if his svengali propagandist is there by his side.

So far, 27 Tory MP’s have supported the view that Dominic Cummings must go solely because he is such a toxic public figure – an unelected one.  Even Former hard Brexit ERG chairman and ex-Brexit minister Steve Baker put his head above the parapet. He put forward his view forward by writing that “Dominic Cummings must go before he does any more harm”. This is a Tory party on fire internally and externally.

In the midst of all this – the hardline Brexiteers are pushing for a hard Brexit, a crash out from the EU and a trade deal with America while two-thirds of the public want a Brexit extension to allow ministers to concentrate on the Covid crisis.

It makes no matter which way you look at this – this is not going to end well.