Language of Brexit – Where ‘Taking Back Control’ really came from 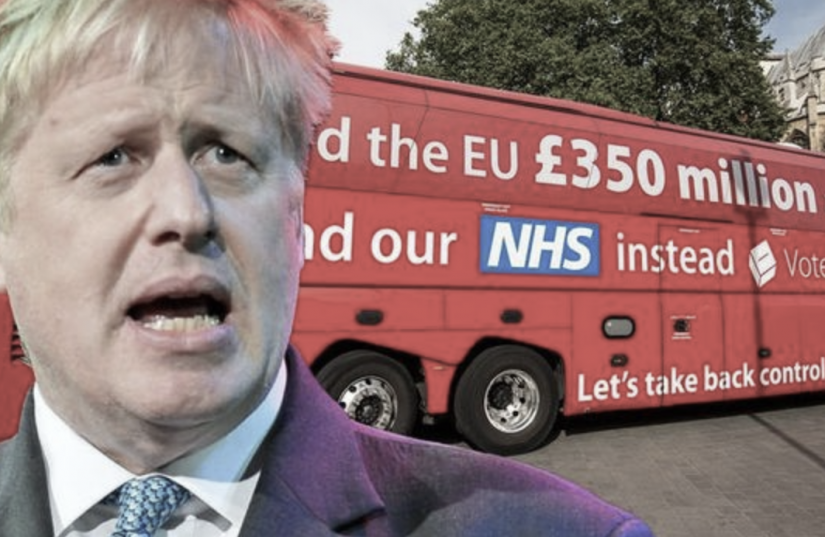 The Leave campaign’s ‘£350m a week’ figure cut through to voters in the 2016 referendum, while the Treasury’s ‘£4,300 per household per year’ didn’t. Was the relationship between the two figures intuitively self-evident? One is six times bigger than the other. Tessa Buchanan (University College London) looks at some of the behavioural lessons that can be learned from the campaign.

Psychologist Daniel Kahneman, who picked up the Nobel Prize for economics in 2002, describes himself rather charmingly as “mediocre in math”. It’s fair to say that this is in comparison to university classmates who went on to become world-class mathematicians. However, this all-too-human admission underlines a wider psychological point.

As Kahneman wrote in his 2011 book ‘Thinking, Fast and Slow’, while many people do simple calculations (e.g. 2 + 2) in their head using their automatic ‘System 1’ processes, they shy away from complicated sums (e.g. 17 x 24) that require them to engage the more effortful ‘System 2’ style of thinking. And if people are indeed reluctant to do the maths, then this has important implications for communicators, including those who worked on the 2016 EU referendum.

For example, if you were asked: “Thinking about the UK as a whole, which of these figures do you think is bigger: £350m a week or £4,300 per household per year?” what would your immediate answer be?

This question was posed as part of a wider piece of research I carried out in September 2017, findings from which were published this June in Mind & Society. Given that pollsters, journalists and academics alike were surprised by the results of the referendum, I wanted to explore what behavioural lessons could be learned from the campaign – not on the basis that behavioural science could fully explain the result, but rather on the assumption that in a close contest, even marginal gains could make a difference.

Over 450 Leave voters took part in a survey designed to test the extent to which individual elements of the MINDSPACE framework (2010) had been at play. This mnemonic was developed by academics including LSE professor Paul Dolan and founder members of the UK’s Behavioural Insights Team, then working at the Institute for Government, to raise awareness among civil servants of “nine of the most robust (non-coercive) influences on our behaviour”.

“I”, in this instance, represents “Incentives”. As described by Dolan et al.:

“Our responses to incentives are shaped by predictable mental shortcuts such as strongly avoiding losses.”

Loss aversion was an early discovery by Kahneman and his research partner Amos Tversky. They established that people care twice as much about potential losses as gains. In politics, this can be linked to nostalgia (consider the sense of loss in the phrase ‘Make America Great Again’). Certainly, it was deployed by both sides in the referendum campaign. Dominic Cummings (portrayed by actor Benedict Cumberbatch in the 2019 Channel 4 drama ‘Brexit: The Uncivil War’) was the campaign director of the official Vote Leave campaign, and is now a senior advisor to the Prime Minister. In a 2017 blogpost, he said that he amended his initial slogan of ‘Take Control’ to ‘Take Back Control’ as: “‘back’ plays into a strong evolved instinct – we hate losing things, especially control”.

In my study, I asked participants: “In your opinion, which of these slogans worked best?” My expectation was that twice as many would prefer the longer version. In fact, four times as many opted for “Take Back Control” over “Take Control” (67% vs. 16%).

Loss-framing was also used to present two of the most important economic arguments used in the campaign: the £350m which the Leave campaign said was being sent to the EU every week, and the £4,300 per household per year which HM Treasury said UK households stood to lose if voters opted for Leave (albeit after 15 years in one of three potential scenarios).

The figure of £350m a week was announced relatively early in the campaign and has since become indelibly associated with the UK’s new Prime Minister Boris Johnson. Research published by Bobby Duffy in autumn 2018 suggested that 42% of the UK public still believe it to be true, despite criticism from the UK Statistics Authority that it was a “clear misuse of official statistics”. And views are split. One in five Remain supporters believe the figure, compared with two-thirds of Leave supporters.

The Treasury figure was linked to George Osborne, then Chancellor of the Exchequer. Gary Gibbon, political editor of Channel 4 News, describes in his 2016 book ‘Breaking Point’ how he was summoned to HM Treasury for the announcement of their figure. “Fingers in ears, the government fired off its great gun and waited for reaction,” he wrote. “Then they waited some more. And then a bit longer still.” This was in contrast to the Leave campaign’s £350m a week, which Gibbon said “got through to people”.

Why did the Treasury’s figure fall flat? Geoffrey Evans and Anand Menon, in Brexit and British Politics(2017) argued that it had “spurious specificity”, being too precise for what was essentially a forecast. But was the relationship between the figures intuitively self-evident? Putting to one side questions about credibility and any time preference effects, I asked participants to compare the two figures at face value in the present time. Given that there were 27m UK households in 2016 (ONS), the question can be expressed mathematically as follows:

When I asked participants in this study if they remembered these figures, £350m a week was recalled by ten times more people (72% vs. 7%). This was unsurprising as it was used prominently and spent longer in the public eye. I then asked participants: “Thinking about the UK as a whole, which of these figures do you think is bigger: £350m a week or £4,300 per household per year?” Only a third (35%) gave the correct answer, as against 39% who thought the Leave figure was greater and 26% who didn’t know.

Finally, I gave the participants the information needed to perform the calculation (the number of UK households) and asked them to choose which of four graphs showed the figures in the correct proportions. The correct graph was the least popular choice, picked by only 15%. The majority (39% + 18% = 57%) chose options showing
£350m a week as the larger figure.

“If there are 27m households in the UK, which option do you think shows £350m a week (in red) versus £4,300 per household per year (in blue) in the correct proportions?” 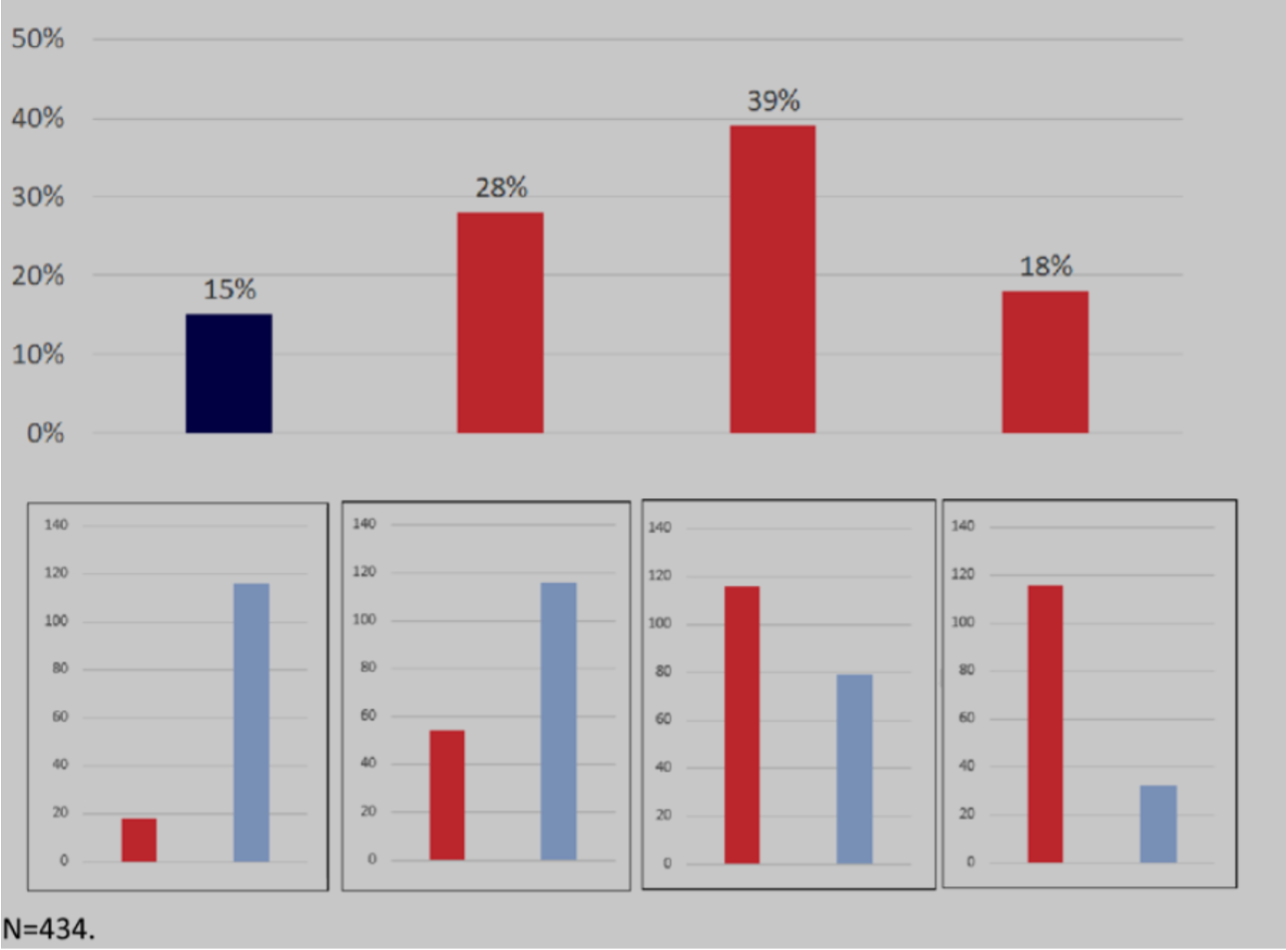 It is well known in psychology that many humans find the relationship between smaller numbers easier to grasp intuitively than that between larger figures. For this reason, it is commonly held as best practice in government communications to do as the Treasury did, and reduce big numbers to more human-sized amounts.

In this instance, the folk wisdom failed, and this was not the only surprising finding that emerged from my research. Looking at the other elements of MINDSPACE, as a messenger, an anonymous “local businessman” was seen as more trustworthy on every issue tested than a cabinet secretary; the study threw up clues as to why the status quo bias, seen as the default by many, didn’t prevail; and by deploying affect and other behavioural insights in a narrative, I found that Leave voters’ views on immigration were not necessarily fixed.

However, the main message for communicators is that even experts can benefit from seeking out evidence on which to base their decisions. It’s good advice, as the Behavioural Insights Team suggests, to ‘Test, Learn, Adapt’; and to make it easy for people to understand your message. And it’s clearly rash to assume that voters will do the maths for themselves. After all, as Cass Sunstein and Richard Thaler say in ‘Nudge’ (2008), when it comes to politics: “voters… seem to rely primarily on their Automatic System.”

MINDSPACE (2010) was produced by the Cabinet Office and the Institute for Government and co-authored by Paul Dolan, Michael Hallsworth, David Halpern, Dominic King and Ivo Vlaev.

This article was originally entitled – “Brexit behaviourally: which do you think is the bigger figure – £350m a week or £4,300 per household per year?” and published in the June 2019 edition of Mind & Society (Tessa Buchanan, 2019. “Brexit behaviourally: lessons learned from the 2016 referendum,” Mind & Society: Cognitive Studies in Economics and Social Sciences, Springer; Fondazione Rosselli, vol. 18(1), pages 13-31, June.)

Tessa Buchanan (@UCLTessa) is a doctoral student at University College London. She studied for a master’s degree in Behavioural Science at LSE.