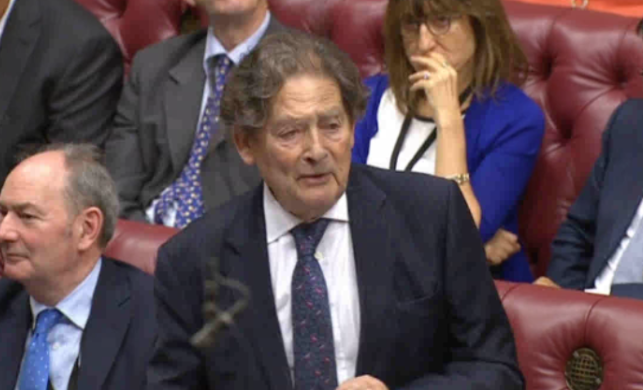 That statement was a complete lie. There are only 16 countries in a world of 191 economies that has an annual GDP of over $1trillion and 67 per cent of all global economies generate less than one-third of what Britain does. The EU itself is the second largest economy in the world, behind America with one-third of the top 25 trading nations being in the EU.

So being outside the EU does come with risks. Those risks centre mainly around leaving the 27 nation trading bloc and then not having other trade agreements signed and ready. Of the 40 trade agreements Liam Fox has avidly expressed are all lining up to sign, not one – I repeat, not one has actually been signed.

In the meantime, Nigel Lawson has been comfortably sat in the House of Lords since 1992 now lives in the past. He constantly refers to his golden years under Thatcher by saying that it was “the reforms that restored the UK economy during the Thatcher administration.” That too is a lie. Thatcher brought us an ideology called neoliberal capitalism and today we are where we are because of it; the breakdown of community and civil society, the crumbling system of globalisation and the world order as we know it because its fundamental message of ‘trickle down economics’ was a falsehood – and everyone now knows it. Hence the rise of populist leaders, isolationism and protectionism.

The result of that is that Britain is to become fully ‘Americanised’ – and I can’t think of anything worse.

But more recently, this highly vocal and visible arch-Brexiteer who thinks all Briton’s should do as he says has moved to Gers, south-west France. How nice.

Lawson said in 2016 that leaving the EU would not affect Britons’ fundamental rights but it might mean “a little extra tiresome paperwork.”

Lawson has not lived in France for long – only several years but has stated that the EU is ‘profoundly’ undemocratic, suffers from ‘a bureaucratic surplus’ and has a ‘democratic deficit’ and that membership is an affront to self-government.

And yet, prefers to live there than Britain.