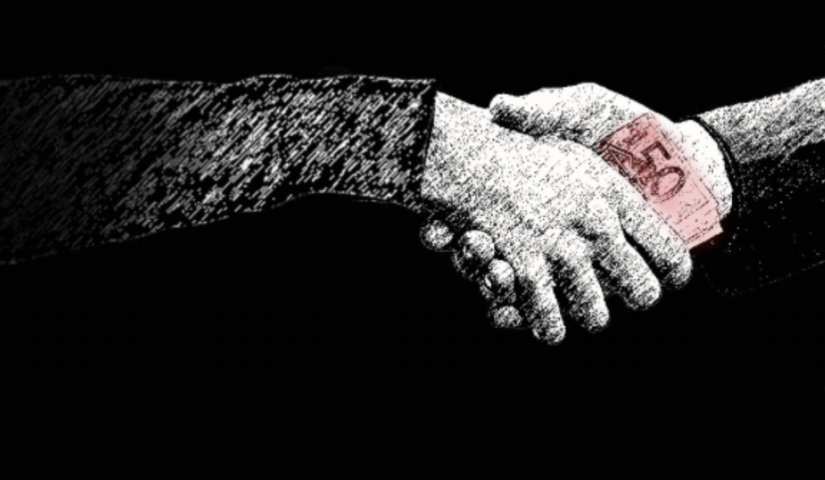 By Martin Williams and Peter Geoghegan: Analysis by openDemocracy finds MPs topped up wages with money from tax havens, banks, companies that won COVID contracts, and more. While huge swathes of the population were furloughed, some parliamentarians topped up their income with paid advice to businesses on COVID policy, while others took jobs with firms that won test-and-trace contracts.

In all, more than a third of MPs reported additional earnings above their standard £82,000 salary since the first lockdown began on 23 March last year.

The highest earner was former prime minister Theresa May, who received £616,000 in speaking fees over the past 12 months – including more than £130,000 for three speeches delivered on video calls.

In August, onetime chancellor Sajid Javid took a £150,000-a-year job as an adviser to JP Morgan, which involves just 80-96 hours of work per year.

While keeping his seat in Parliament, former attorney general Geoffrey Cox started a new job at an international law firm, Withers LLP – boasting an annual salary of £468,000 a year. Reports suggest Mr Cox will help the company to “open doors with foreign governments”.

“MPs lining their own pockets, or lining the pockets of their friends, during the pandemic is one of the real scandals of this crisis,” Green Party MP Caroline Lucas told openDemocracy.

“When millions have had no support at all during COVID and are facing destitution, it’s outrageous that MPs with connections have been able to make money advising companies which are seeking public-funded contracts.”

‘This needs to stop’

Several other MPs have seen their incomes rise as a direct result of the pandemic, according to parliament’s register of members’ interests.

In July, when the government was under pressure to increase COVID testing, Conservative MP Alun Cairns accepted a job advising a science company involved in testing. The former Welsh secretary said he was offered the £15,000-a-year role at BBI Group because he knew the chairman.

Tory MP Richard Fuller was paid £65,000 moonlighting at a venture capital firm called Investcorp Securities Ltd. This included £30,000 for “consultancy work on the impact of COVID on portfolio companies”.

One of those “portfolio companies” is Cambio, a private health firm, which was handed a £63,000 NHS contract last week, without competition from other providers.

Former environment secretary Owen Paterson was paid £100,000 a year to act as a consultant to Randox Laboratories Ltd, at a rate of £120 an hour. On 30 March, the company was awarded a £133m in COVID contracts by the government, without any other companies being allowed to bid for the work. Less than two weeks later, Paterson personally spoke to health minister Lord Bethell on a phone call with Randox.

Conservative MP Bill Wiggin was paid tens of thousands of pounds as the director of various offshore finance ventures, in the tax havens of Bermuda and the Cayman Islands. On top of a £49,140 salary, he has also received ‘director’s fees’ of more than £21,000 and £7,500 in bonuses in the past year.

Former cabinet minister George Freeman broke the ministerial code by failing to seek official approval before receiving £5,000 for consultancy work to a company producing protective equipment used by the NHS.

“It’s patently clear practices like this are unacceptable yet Parliament still deems them permissible – this needs to stop.”

Responding to openDemocracy’s findings, Transparency International said: “It’s patently clear practices like this are unacceptable yet Parliament still deems them permissible – this needs to stop.”

openDemocracy’s analysis shows that 85 of these MPs were paid at least £10,000 from outside interests, while eight MPs earned more than £100,000 each.

A few MPs chose to donate their extra earnings to charity. Theresa May’s payments “are used to pay employees, maintain my ongoing involvement in public life and support my charitable work”, according to the register of members’ interests. Sajid Javid donated £15,000 from a management consultancy to charity. But most second jobs are accepted as additional wages.

On the Labour benches, David Lammy was paid £41,000 for speaking engagements and media appearances, for clients including Google, the Royal Bank of Canada and Lloyds of London.

And the SNP’s Westminster leader, Ian Blackford, has been paid £3,247 a month as chairman of the Glasgow-based Golden Charter Trust Ltd.

The money earned from moonlighting comes on top of the extra income that many politicians receive from renting out private properties. Some 116 MPs are currently registered as landlords, each earning at least £10,000 a year from rent.

When combined with their regular salary as MPs – with even more paid to ministers and other officials – the total annual income of MPs was in excess of £65m.

There are no rules banning MPs from taking second jobs – and there are no set hours for parliamentary work.

In 2018, the Committee on Standards in Public Life said that MPs should be banned from taking on outside jobs as parliamentary strategists, advisers or consultants – but the rules remain unchanged.

The Code of Conduct says MPs should not act as a “paid advocate” in the House of Commons.

However, a loophole in the rules appears to allow MPs to lobby the government – so long as they do so outside of parliament itself. This means that MPs would not be breaking any rules if they spoke directly to a government department to lobby on behalf of private companies.

The committee on standards has recommended changes to the sanctions regime for undeclared financial interests last year. But the proposals still haven’t had a government response, some six months on from when it was published.

”It must be baffling for constituents to learn their representatives can be hired by businesses as advisors on parliamentary affairs and public policy.”

Spotlight on Corruption’s Sue Hawley added: “It is not at all a good look for MPs to be benefitting from paid jobs with companies that have won controversial COVID contracts or from firms based in tax havens.

“This should prompt real debate about whether the rules for MPs’ outside interests are strong enough, and why progress has been so slow at implementing changes recommended by the Committee on Standards in Public Life.”