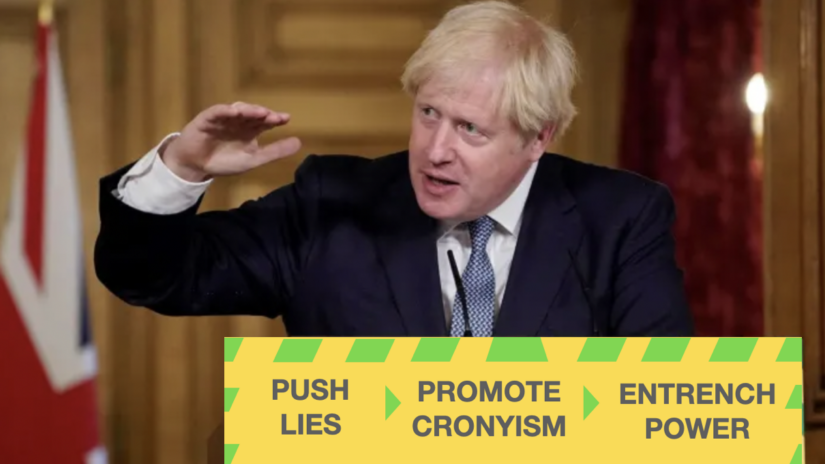 By Seth Thevoz: The government of Boris Johnson is breaking its own transparency rules by allowing large payments to the prime minister and other ministers to be kept secret for up to eight months, openDemocracy has found.

The ethics hush-up, which is in breach of the Ministerial Code, has been described as “scandalous” by a former chair of the Committee on Standards in Public Life. It has, among other things, enabled continuing secrecy over the source of an alleged £60,000 private donation to help fund a lavish refurbishment of Boris Johnson’s private apartments – a controversy which is now being probed by the Electoral Commission.

The Ministerial Code promises that “a statement covering relevant Ministers’ interests will be published twice yearly”. None has been published since last July; the last one before that appeared in December 2019.

At a time when Boris Johnson’s government is under fire for COVID contracts and cronyism scandals, Alistair Graham, a former chair of the Committee on Standards in Public Life, branded the failure to publish ministers’ interests “All pretty scandalous; dreadful!”

A Business Insider exclusive two weeks ago first shed light on the reasons for this paralysis of the government’s ethics regime. Last November, the prime minister’s independent adviser on ministerial standards, Alex Allan, resigned in protest at Johnson’s refusal to sack his home secretary, Priti Patel, over her alleged bullying of civil servants. Allan’s job involved overseeing and signing off the twice-yearly report of ministers’ interests.

Four months on, the vacancy left by Allan has still not been filled. Questions to the Cabinet Office about a specific timetable for appointments, or proof that the post had even been advertised, did not receive a response.

Who funded the refurbishment?

openDemocracy began investigating ministerial non-disclosure when trying to find out who funded the refurbishment of the private Downing Street apartments where Boris Johnson and his partner, Carrie Symonds, live.

The Daily Mail has reported that Downing Street allegedly sought to plug the gap in the six-figure refurbishment of the prime ministerial flat using Conservative Party funds. After the party initially paid for part of the refurb, the Mail reports, Conservative Party donor Lord Brownlow gave it £60,000 last autumn to make up the difference.

The Mail also claims that party officials have since been looking for ways to keep the donation anonymous by returning it, and then repeating it through a new ‘Downing Street Trust’ that would conceal the original source.

Lord Brownlow, who served as vice-chairman of the Tory party in 2017-20 and was made a peer in 2019 by Theresa May, is expected to head up this new non-charitable trust. Sources indicate this will be modelled on the Chequers Trust, which owns the prime minister’s country retreat.

Downing Street and the Conservative Party have repeatedly declined to comment on this highly unorthodox use of party money.

Under Electoral Commission rules, any large party donation for this period should have been published several weeks ago, but Lord Brownlow’s alleged £60,000 remains undeclared. The Mail has now revealed that the Electoral Commission has asked Downing Street to account for the money.

openDemocracy understands that efforts have been underway to report Boris Johnson over the phantom donations to the parliamentary commissioner for standards in the House of Commons. However, the commissioner’s office is understood to be reluctant to take on a matter that it sees as being covered by the ministerial regulatory regime – notwithstanding the fact that that regime appears to have ground to a halt several months ago.

“This would be the first time party funds have been used to subsidise a leading politician’s lifestyle since Jeremy Thorpe kept a Liberal Party fund in the 1970s for paying tailors’ bills, handmade shoemakers, ‘rent boys’ and a hitman.”

It is unclear how the ‘Downing Street Trust’ gambit could stop disclosure of Lord Brownlow’s alleged £60,000 donation, however. Under electoral laws, large donations to a party must be declared even if they have been returned, and there are stringent rules in place to prevent the source of large donations from being obscured.

If the Daily Mail’s reports about the source of funding for the Downing Street refurbishment are true, it is thought that this would be the first time party funds have been used to subsidise a leading politician’s lifestyle since Jeremy Thorpe kept a Liberal Party fund in the 1970s for paying tailors’ bills, handmade shoemakers, ‘rent boys’ and a hitman. Johnson and Symonds are believed to have used the money for rather tamer purposes: paying top interior designer Lulu Lytle.

Brownlow has been among the secretive Leader’s Group of elite Tory donors of over £50,000 a year, although it is impossible to verify if he still is. For a decade under David Cameron and Theresa May, the Conservative Party released quarterly attendee lists of these donor meetings, but since Johnson became prime minister, the party has stopped disclosing them, in a move which foreshadowed how his government would treat ministerial interests.

In a further twist, if any complaints about these matters are to be brought under the Ministerial Code, then only one person can assess their merit: the prime minister himself.

Scottish Conservative leader Douglas Ross has repeatedly called for the resignation of First Minister Nicola Sturgeon over unrelated allegations she may have broken the Ministerial Code. However, these calls were made before it emerged that the entire UK government is in breach of its own code.

Asked to comment on openDemocracy’s findings and on the vacancy left by Sir Alex Allan as adviser on ministerial standards, a Cabinet Office spokesperson would say only: “An announcement will be made in due course,” and would not be drawn on further discussion or comment. Some government sources have suggested that both the appointment of a new adviser and the publication of the register would eventually take place; others have cast doubt on whether either will appear at all.

Even if a new adviser were appointed tomorrow, they would have a backlog not just of Boris Johnson but 137 ministers to assess, and many would prompt extensive correspondence and interviews, dealing with large and complex portfolios.

Jacob Rees-Mogg, the Leader of the House of Commons, for instance, is estimated by his biographer Lord Ashcroft to be worth anything between £70m and £200m, including a 20% share of the asset management firm he founded, and extensive property holdings and investments. Conservative peer Zac Goldsmith, a minister and close Johnson ally, was valued in the last ‘Sunday Times Rich List’ as having a net worth of £285m. Carefully tracking potential conflicts of interest arising from such extensive holdings, even if held in a blind trust, is a painstaking process.

The current rules were put in place by the Nolan Committee on Public Life in the 1990s, to stop a repeat of the Tory ‘sleaze’ that rocked John Major’s fourth-term Conservative government, on an almost weekly basis.

Alistair Graham, the former chair of the Committee on Standards in Public Life, said: “I’m shocked to hear of this, but I wasn’t surprised to hear there wasn’t a replacement for Sir Alex Allan – they obviously find such a position an embarrassment.”

A government spokesperson for Boris Johnson said: “The Downing Street complex is a working building, as well as containing two ministerial residences. As has been the case under successive administrations, refurbishments and maintenance are made periodically. Matters concerning works on the Downing Street estate, including the residences, will be covered in the Cabinet Office’s next annual report and accounts.” This report is not expected to be published before July.

Neither the Conservative Party nor Lord Brownlow responded to our invitations to comment.