Northern Ireland: Another reminder that a hard Brexit is looming 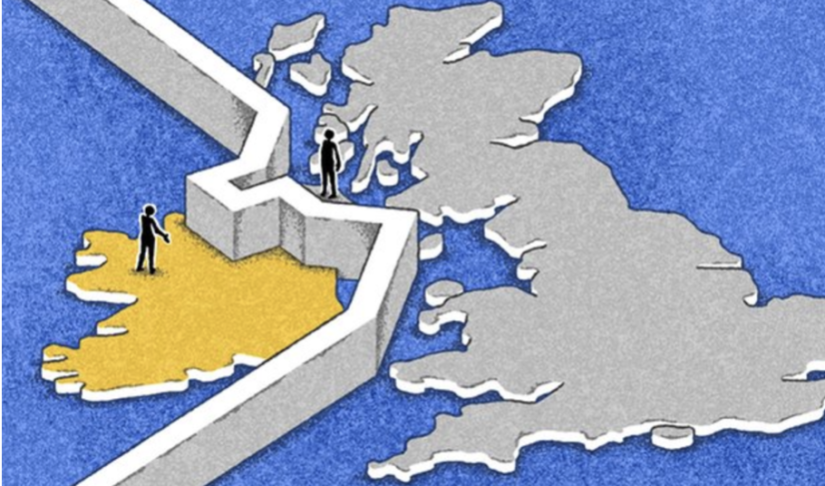 RTÉ News is the national news service provided by Irish public broadcaster Raidió Teilifís Éireann. Its Europe Editor, Tony Connelly has written a piece that further exposes the lie that the British government is actively working towards signing a mutually agreeable trade deal with the EU and that the ‘Withdrawal Agreement’ was anything but an agreement as it reneges on terms already agreed.

The Irish question is back and is once again plaguing the relationship between Britain and Europe.

This time the animosity revolves around a physical EU presence in Belfast. The European Commission insists that the Irish Protocol requires officials to oversee checks and controls on goods going from Britain to Northern Ireland, and that they need an office to work out of.

The UK says the Protocol does not legally require this and such an office would be divisive and contrary to the aims of the Good Friday Agreement.

Some observers now believe the issue has got out of control because of a lack of trust. With British Prime Minister Boris Johnson and other senior UK figures having boasted there would be no checks or controls between Britain and Northern Ireland, the European Commission does not trust the UK to meet its obligations.

“The Commission could have people based in Dundalk who could drive to Belfast every day and look over the shoulders of the UK authorities [carrying out checks],” says one source close to the discussions. “They can achieve their functional requirement. But the Commission wouldn’t have had to be so pushy if they could  trust the UK to do the right thing.”

However, RTÉ News has established that back in February 2019 the idea of an EU office in Belfast was regarded enthusiastically by the UK in an exchange of letters with the EU.

Connelly writes –  “It turns out that the Foreign Office Permanent Secretary, Simon McDonald, wrote to his EU counterpart that the UK wanted to keep EU embassies, not only in Belfast but in Edinburgh and Cardiff as well. The same Mr McDonald was instrumental in flatly turning the EU down on this occasion, a little over a year since he first embraced the idea.

How did things come to this?  Back in October 2018, after Theresa May’s Withdrawal Agreement was concluded, it seemed clear the European Commission’s offices in Cardiff and Edinburgh were going to close, and the EU representation in London would be replaced by a lower status EU delegation.

As part of this reconfiguration Martin Selmayr, the then Secretary-General of the Commission suggested that the EU should keep its presence in Belfast, due to the existence of the backstop. According to Brussels sources, the issue moved slowly and there were no major objections from the UK side.

Then May’s Withdrawal Agreement foundered on the rocks of repeated rejections by the House of Commons. She was forced to resign, Boris Johnson was elected leader, and in the autumn of 2019 negotiated a revised Protocol.

The issue of an EU presence in Belfast was still in the mix, according to Brussels sources. Earlier that year the issue had been passed to the EU’s External Action Service (EEAS), which handles all the EU’s overseas delegations.

The EEAS had doubts about a Belfast office being a fully-fledged European Commission delegation, such as those located in capitals around the world.

The conversation then moved to the office simply having a technical function that would reflect the work required by the Protocol Johnson had just negotiated.

It did not appear a controversial issue at EU level. This would be an office where the EU could make sure that the Protocol, which is designed to avoid a hard border on the island of Ireland and to protect the EU’s single market, was being properly implemented.”

Now, the idea of joint EU-UK controls was seen as an unacceptable infringement of UK sovereignty by London. As such, when Theresa May’s Protocol was concluded, it provided for UK customs officials to do the checks, but with EU officials periodically overseeing such checks.

When Boris Johnson renegotiated the Protocol, his government toyed with the idea of binning that approach altogether and having no EU presence at all. In the end, however, that idea was dropped.

According to London, the first time the idea of an EU presence in Belfast came up was in a letter from Helga Schmid, the Secretary-General of the EEAS, on 12 February of this year.

British sources say this came like a bolt from the blue, at a time when the British and Irish governments had just managed to restore the Northern Ireland Assembly.

Schmid argued that Article 12 of the Protocol, which requires EU officials to “be present during any activities of [UK] authorities” when carrying out EU customs and regulatory checks, meant the EU should have a permanent presence in Northern Ireland.

The EU would need “very particular capabilities and competences on the ground, distinctive from the more traditional competences of any other EU delegation.”

The EU hoped the office would be up and running by the summer of 2020, in time for the transition period to end and the new system to take effect on 1 January.

From here, everything falls apart.

The UK was obliged to facilitate EU officials “to ensure the EU is in a position to exercise its rights effectively.”

“It is hard to see how this can be resolved amicably. By so readily jumping on the notion that the EU request had caused “controversy” and was “divisive”, the UK has given unionists ample cover to vociferously reject the idea of an EU office in Belfast”

Furthermore, since the two main unionist parties had declined to sign a joint letter by the leaders of Sinn Féin, the SDLP, the Alliance Party and the Green Party supporting the office, it meant the idea had “attracted controversy, [which] would be divisive in political and community terms.”

This was three days before the first meeting of the Specialised Committee, which brings EU and UK officials together to implement the Protocol.

While the video conference was deemed by both sides as constructive – indeed more constructive than expected – the strongest exchanges were over the EU office issue.

“The EU side had a fairly sharp response,” says one source briefed on the video conference, “regretting very strongly the British approach, underlining the importance of this office in implementing the Protocol.”

The UK side responded equally sharply.  One official said implementing the Protocol was hard enough without “needlessly” introducing the idea of an EU office in Belfast into the mix, a request which had split the North’s political parties along entirely predictable community lines.

The video conference was joined by officials from France, Germany, Spain, Greece, Belgium, the Netherlands and Ireland, and by a senior official from the Northern Ireland Executive.

The Irish official said the Government here saw the office as “logical” given the demands of Article 12 and that it in no way undermined the Good Friday Agreement, “not least given ongoing EU support for the peace process.”

The official said Ireland hoped that “such a presence could be accommodated in a way that satisfied both sides’ needs and sensitivities.”

Although they see the roots of the standoff differently, all sides say they are dismayed that the issue has escalated so quickly, especially when there is already such a deep level of mistrust over the implementation of the Protocol.

The rest of the story by Connelly is well worth the read but what he concludes is that relations between the British and EU negotiators has taken a rapid dive, that trust has followed it and that there is a growing sense of doom over the withdrawal agreement.

“It is hard to see how this can be resolved amicably. By so readily jumping on the notion that the EU request had caused “controversy” and was “divisive”, the UK has given unionists ample cover to vociferously reject the idea of an EU office in Belfast.

So the EU presence in Northern Ireland has become not just a proxy for the issue of trust, but a symbol that will antagonise both the nationalist/unionist, remain/leave fault lines.  History reminds us that in Northern Ireland, symbols are the last things to get fixed.”