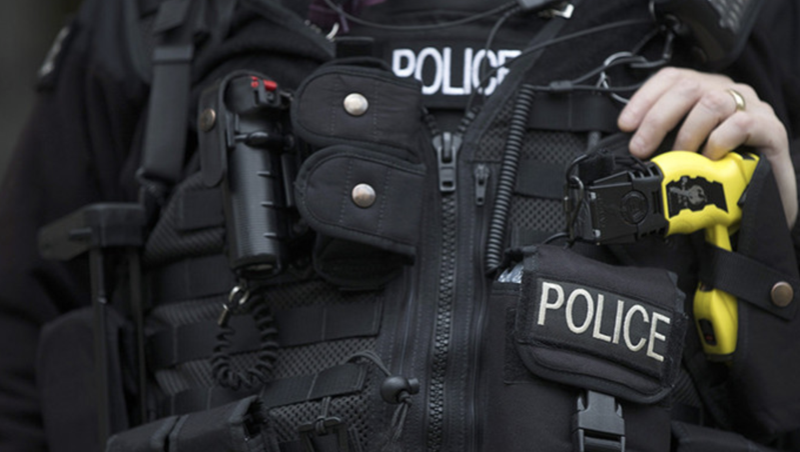 Figures released by the Home Office show that the use of stun guns is on the increase in the UK. For the year to March 2019, stun guns were deployed in 23,000 incidents and fired on 2,500 occasions. These figures underscore that the use of these life-threatening weapons is now routine, with their use up by more than a third on the year to March 2018 and double the 2016 total.

The use of stun guns has sparked controversy since their introduction, following the growing numbers of deaths they have caused when deployed. According to Amnesty International, 18 people in Britain have died after a stun gun was discharged on them by police since their introduction in 2003 and their rollout to all forces in 2013.

Jordan Begley, aged 23, from Manchester died following the use of a Taser while being arrested in July 2013. A jury at the inquest into his death, in 2015, delivered a narrative verdict concluding he died partly as a result of being “inappropriately and unreasonably” tasered.

There is also evidence that the use of a stun gun can potentially escalate a situation, rather than protect someone from being assaulted.

A study carried out by Cambridge University and City of London Police found that the presence of electroshock devices in a given situation leads to greater hostility in police-public interactions, with researchers describing this as the “weapons effect.”

Dr Barak Ariel, lead researcher from Cambridge’s Institute of Criminology, said, “We found that officers are more likely to be assaulted when carrying electroshock weaponry, and more likely to apply force.”

Ariel said, “For many, a weapon is a deterrence. However, some individuals interpret the sight of a weapon as an aggressive cue—a threat that creates a hostile environment.” This can lead to a fight or flight dilemma, with potentially heightened aggressive behaviour and assault.

Under the Conservative government, there have been calls from the Home Office for all police officers to be trained in the use of Tasers. A survey carried out by the Police Federation of England and Wales found that 94 per cent of police officers think Tasers should be issued to more front-line staff.

At present, it has been left to the discretion of each police force to decide if they use stun guns or not. To date, both Northamptonshire and Durham Constabularies issue them to all front-line police officers.

In her keynote speech to the ruling Conservatives conference last year, Home Secretary Priti Patel said that up to 60 per cent of police officers in England will be able to carry Tasers whilst on duty. An additional £10 million is being allocated to fund this. This allows an additional 10,000 front-line police officers to be able to carry a Taser. Police forces estimate that this will mean every officer who wants to carry one will be able to do so.

The most high-profile death at the hands of a police Taser was that of former Premier League football player Dalian Atkinson. Both police officers involved in the arrest that led to the death of Atkinson on August 15, 2016, following the use of a Taser will now stand trial in September later this year. One of them is charged with murder.

In November last year, a court order was lifted by the Crown Prosecution Service (CPS), that had been used to provide anonymity to both officers. The decision to lift the ban came after lawyers acting for six news organisations, including the Guardian, argued that the order was an “unjustified” and serious interference with the principle of open justice.

It is usual practice to name suspects charged by the CPS. The lawyers representing the police officers accepted that their anonymity could not be justified but asked that the addresses of both defendants not be disclosed.

PC Benjamin Monk, 41, from the West Mercia Police, was charged with murder that could lead to a sentence of life in prison. His colleague, PC Mary Ellen Bettley-Smith, 29, was charged that she assaulted Atkinson occasioning actual bodily harm, to which she entered a not guilty plea.

Following a pretrial hearing at Birmingham Crown Court in December, both officers will stand trial on September 14.

This decision comes just over one year after the case had been referred to the CPS, by the Independent Office for Police Conduct (IOPC), which had been conducting a criminal investigation into the case for over 16 months.

The near collapse of national security and policing