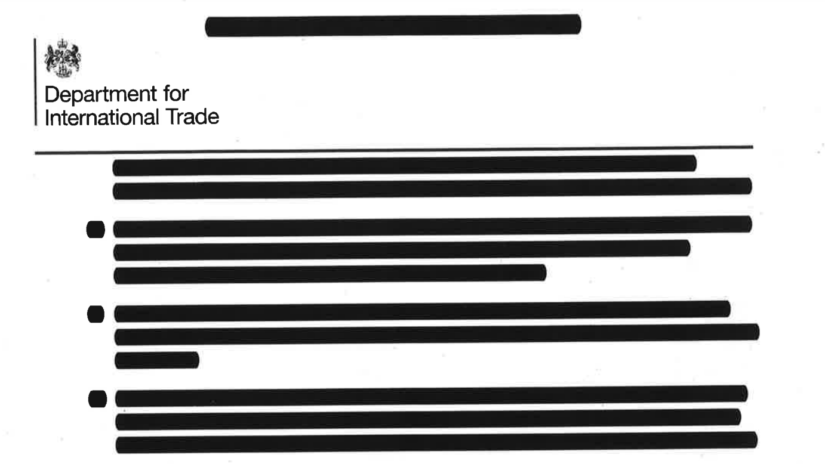 The European Union (EU) has about 40 free trade deals, covering more than 70 countries. That means the UK, as a member of the EU, can currently trade with countries like Canada without having to pay taxes on imports (tariffs) on most goods.

In the event of a no-deal Brexit, the UK would suddenly lose tariff-free access to these markets and it would have to trade under World Trade Organization (WTO) rules.

So far, after three years, the UK has signed 18 “continuity” deals covering 48 countries or territories. Combined, these deals represent about 8% of total UK trade.

However, considerable energy and effort is being expended by Conservative party trade negotiators to do a deal with America. Due to the negative public sentiment and suspicion towards a UK-US trade deal, these negotiations have not just been held in secret, the papers relating to them have been classified as “officially Sensitive” and then redacted so much as to make them completely unusable and meaningless. 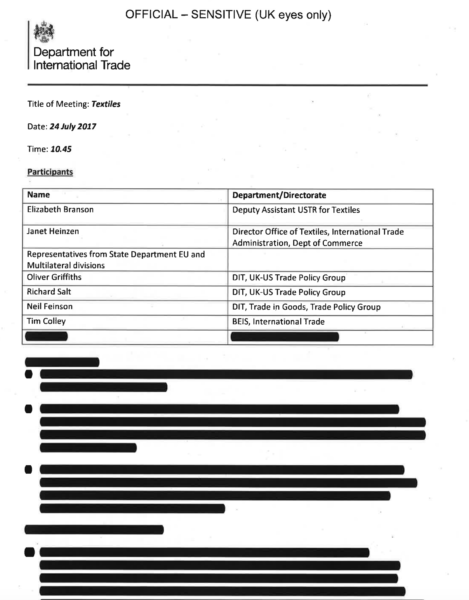 Campaign group Global Justice has called on Prime Minister Boris Johnson to order the release of multiple documents, dubbed the ‘Trump Trade Files’, relating to trade talks between the UK government and the Trump administration, in advance of the general election on 12 December, so that the electorate can be properly informed on the government’s plans for post-Brexit trade.

The documents are the records of trade talks that have taken place between US and UK government officials since 2017. A number of meetings have taken place, most recently in London in July 2019.

The campaigners have placed heavily redacted versions of the documents online (see below). They were obtained following a Freedom of Information request relating to the minutes, agendas and attendees of the first two meetings. The request was initially refused, then on appeal, the Department for International Trade released pages of blacked-out documents. A legal challenge is due to be heard at the Information Rights Tribunal on 12 and 13 December.

“The UK government has gone to astonishing lengths to keep its plans for a Trump trade deal secret from the British public, and the absurd sight of page after page of blacked out documents is a shocking display of their disregard for democratic accountability. Trade deals today are massive agreements that affect every aspect of our society, and it is unacceptable that Boris Johnson’s government refuses to tell the public what it’s putting on the table. Empty words are not enough – the government should be judged by its actions. These documents could reveal exactly what our government has already put on the table in trade talks. The public has every right to know what they contain before going to the polls on 12 December.”

“The UK government has gone to astonishing lengths to keep its plans for a Trump trade deal secret from the British public, and the absurd sight of page after page of blacked out documents is a shocking display of their disregard for democratic accountability.”

The call follows a recent poll showing that 45% of people think Boris Johnson is lying when he says the NHS is not for sale and a further 24% aren’t sure. It also follows leaks to Channel 4’s Dispatches which revealed that medicine prices for the NHS have been discussed at every single one of the US-UK working group meetings. In the meantime, there is considerable distaste of Donald Trump in Britain, where 77% of the public distrust him and 49% of the public do not think the Queen should be meeting him. Brexit may be divisive but the Trump Trade Files only add further suspicion to this negative view by the public.