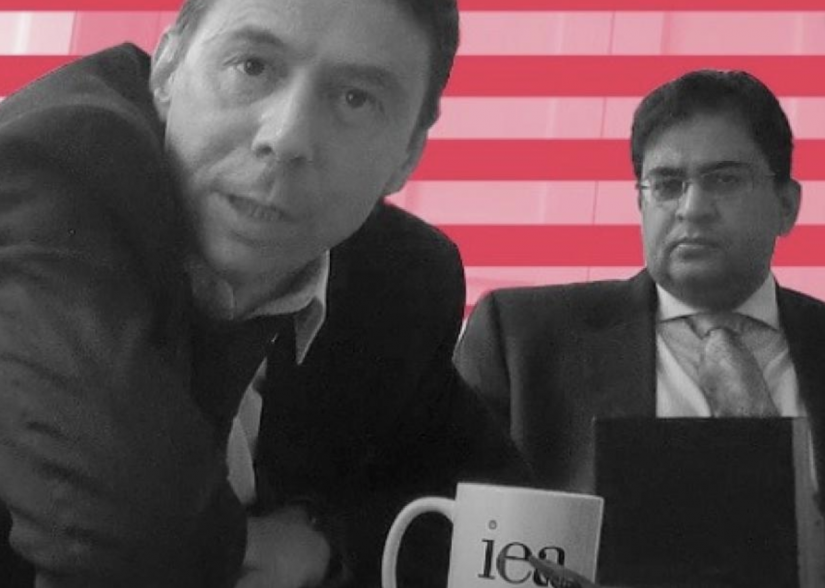 By TruePublica: The Institute for Economic Affairs is renowned for being the most powerful and influential think tank in Britain. Modelled around a right-wing American opaque so-called ‘institute’ it is littered with dodgy donors and surrounded by accusations of dark money interests. Its assaults on public health initiatives, given its real motivations, should be a warning of what might come under a UK/US trade deal and we should be worried if we value Britain’s most revered public institution – the NHS under a Boris Johnson government.

The IEA has faced two official investigations into its activities. The first emerged after it was caught on camera offering potential US donors access to UK government ministers to promote free-trade deals demanded by hardline Brexiters. In any other time gone by, this cash-for-access scandal would have seen political heads rolling.

The second was when the Charity Commission opened a regulatory compliance case into the IEA on the basis of concerns about its political independence. Being an ‘institute’ it is not supposed to be a political lobbyist – which is exactly what the IEA is. The Charity Commission, a non-ministerial department within government – gave it little more than a metaphorical slap on the wrist and told it to behave. Organisations named ‘institutes’ in Britain must carry out research at the highest level or to professional bodies of the highest standing – which the IEA is clearly not adhering to.

Its director Mark Littlewood was covertly filmed promising American corporate donors access to ministers. Its Brexit report, endorsed by the likes of Boris Johnson and Jacob Rees-Mogg had to be withdrawn. That report fuelled much of the free-market debate around Brexit. It called for the UK to drop EU-style regulation, including the bloc’s strict food production and environmental standards, in order to strike a trade deal most significantly with America – and subsequently other countries around the world with equally poor safety standards.

This so-called ‘educational charity’ is moving dodgy money to corrupt politicians and taking a slice on the way to push an ideology of a hard-Brexit and a trade deal with the USA. We can say dodgy and corrupt because the IEA obviously takes no care of where the money is coming from and refuses to reveal its funding sources. The IEA is ranked as one of the most, if not the most ‘opaque’ think tank in Britain.

In neither case was the IEA made to significantly apologise, pay a fine or penalty. The Charity Commission’s deputy chief executive, David Holdsworth, said in a statement: “We made clear to the IEA that the report in question overstepped the line of what is permissible charitable activity and requested that it was removed. We are pleased that the IEA has responded by doing so.”

To give some idea of the IEA’s toxic ideology, and the spreading of right-wing free-market ideology under the guise of so-called research and scientific evidence, below is a list compiled by Jonathan Gornall and published in the BMJ in an excellent in-depth report entitled – “Big tobacco, the new politics, and the threat to public health.” Gornall reveals how the organisation is funded by, for instance, British American Tobacco and has links with senior conservative ministers. I thoroughly recommend everyone to read his article – it is a fascinating insight into just how ‘American’ the political system in Britain is being infected with rampant lobbying.

In just one example of many in this report, Matt Hancock, England’s health secretary, whilst not having direct links with the IEA has received funding from Neil Record, who became chair of the IEA board of trustees in 2015. From 2010 until his appointment as health secretary in July 2018, Hancock received a total of £32 000 from Record, the founder of a currency management company (itself involved in various financial scandals) who joined the IEA’s board of trustees in 2008. Given the scale of examples in Gornall’s report, it is hard to come to any other conclusion that politics in Britain has now broken down almost completely to that of monied interests playing the tune and is, therefore, shaping public policy.

After orchestrating a series of attacks on public health initiatives, Gornall writes about his concern for the NHS.  “The IEA is or has been funded by some of the very industries that stand to gain commercially from its attacks on public health initiatives, and it is connected—ideologically, financially, or both—to no fewer than 25 serving Conservative MPs.” Since writing his article, Boris Johnson, one of those very same MP’s is now sitting behind the desk at No10 and an American trade deal is not far from picking apart and profiting from Britain’s most revered institution – the NHS.

Below is a list of articles and reports the IEA has published attacking public healthcare initiatives in Britain in just one 12-month period.

For instance, Christopher Snowdon who leads the new ‘Lifestyle Economics’ at the Institute of Economic Affairs writes about the government’s attempt to impose Minimum Unit Pricing to alcohol by saying it was “a shamelessly paternalistic and patently regressive policy. Unnecessary and seemingly ineffective, it has no place in a free society.”

In a separate article by the BMJ about the minimum price of alcohol,  Snowdon indirectly acknowledges alcohol industry funding of the IEA.

A year of IEA assaults on public health initiatives

28 Mar 2019: “Comparing drinking to smoking is pointless and misleading”

27 Mar 2019: “Banning discounts on food will hit the pockets of the poorest the hardest”

17 Mar 2019: “Banning food advertisements to stop people eating too much is absurd”

27 Jan 2019: “The Lancet’s diet prescription is authoritarian and undemocratic”

6 Nov 2018: “Taxing red meat is the next battleground for the nanny state”

25 Jul 2018: “Sin taxes can cost poor families up to ten times more than they cost the wealthy”

1 Jun 2018: “IEA welcomes WHO decision to exclude taxes on food and drink from recommendations”

17 May 2018: “Reduction in fixed odds betting terminals stakes will have unintended consequences”

17 May 2018: “WHO proposals on sin taxes could increase a British family’s food bills by nearly £500 each year”

1 May 2018: “Minimum alcohol pricing in Scotland will do nothing to help consumers

In July 2018 Analysis of Health Secretary Matt Hancock’s voting record suggests he strongly favours a private healthcare system. In March 2011 he backed controversial reforms which made it easier for private firms to win big health contracts. Six months later, he voted to lift the cap on cash NHS trusts could pocket from private patients.

Dr Tony O’Sullivan, of the Keep Our NHS Public campaign, said: “This government’s agenda is to defund and ultimately privatise the NHS.”

And speaking in a personal capacity, Dr Kailash Chand, honorary vice chairman of the British Medical Association, added: “In selecting Matt Hancock, the Tory party has confirmed its commitment to the NHS marketisation agenda.”

A few weeks ago a Labour MP wrote to the government’s most senior official to warn about what he said was the potential for conflicts of interest in Boris Johnson’s government if he implemented proposed policies that could potentially benefit major donors.

In the past, the IEA has also taken money from the gambling, alcohol, sugar, and soft drink industries. Meanwhile, politicians with links to the IEA have progressed ever closer to power. The very valid concern that public health policies could be put at risk under a new Johnson leadership is heightened just with knowing about their links to the IEA.