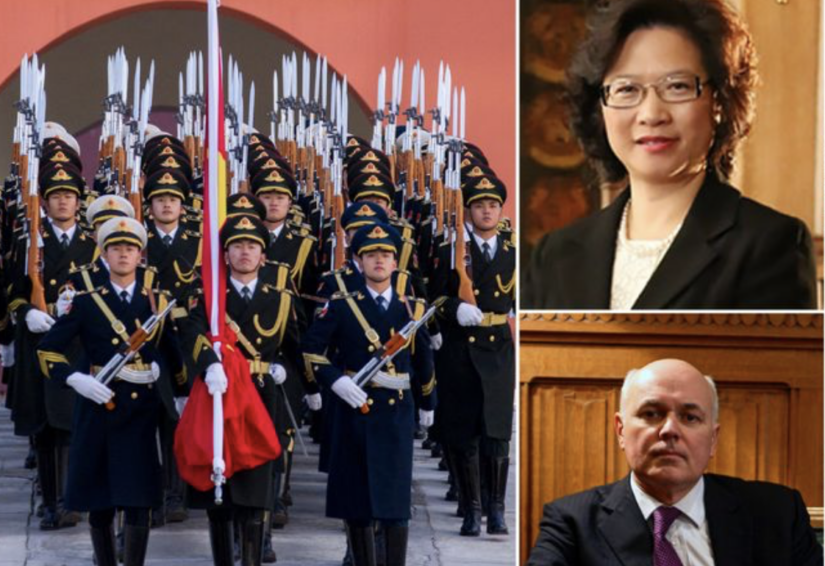 By TruePublica Editor: It is quite unprecedented in Britain for the security services, known as MI5 and MI6, to make public statements about their activities and findings when they are still ongoing. So why would they do so, as is heavily being reported by the mainstream media, in the case of a Chinese government agent who has been caught working within the British Parliament in an attempt to “subvert processes”?

I smell something a bit fishy here.

So, who would you rather believe here? Priti Patel, the current Home Secretary of Boris Johnson’s government or Andrew Levi – a former diplomat with extensive international experience in government and business, a seasoned negotiator with considerable experience of complex, high-pressure environments, in the public and private sectors?

Just in case you’re not sure – the former was involved in a political scandal involving unauthorised meetings with the Government of Israel which breached the Ministerial Code, ending in her being sacked as International Development Secretary. Patel was also accused of a “flagrant breach” of the ministerial code by allegedly lobbying ministers over a £20m PPE deal in May this year. In September. Patel was then accused of breaking the ministerial code yet again by facilitating a meeting between a Tory donor and British Airways. And of course, we shouldn’t forget that Patel lost the bullying case last March with the Government (commonly known as ‘ the taxpayer’) settling the claim against Priti Patel with a ‘substantial’ payout worth £370,000 for former senior Home Office civil servant Sir Philip Rutnam. Of course, it is not lost on observers that Patel reports to her boss, Boris Johnson – currently fighting for his political life as he sinks in a swamp of scandals, generally described nowadays as incompetent as he is dishonest.

This is about “the politicisation of, and escalating damage to, UK national security, by an increasingly desperate PM”

As for the latter, Andrew Levi – he smells something Priti fishy too!

The Home Secretary, reporting to the PM, is responsible for MI5. There are no circumstances, without their permission, in which MI5 would pass to the Speaker a high profile warning about foreign agents active in Parliament. Nor would MI5, if instructed by them, refuse to.

More specifically, if MI5 advised it shouldn’t be done, the Home Secretary/ PM could direct them nonetheless to do so. And MI5 would have to. If MI5 thought it illegal, they would have to refuse. But that looks irrelevant in the current Chinese agent case.

MI5 “self-actuates”, within its mandate, on much of its work. Any security expert would tell you it has to be that way, for very good practical reasons. But not on political matters. Least of all on high profile public announcements.

In short, the decision and timing lie with the Home Secretary and the PM. At which point, we really do have to say “go figure”. Not about a Chinese espionage threat. But about the politicisation of, and escalating damage to, UK national security, by an increasingly desperate PM.

In other words, there is serious opinion here that Priti Patel is not warning anyone about a Chinese spy but really attempting to divert some of the media attention away from No 10 Downing Street. We can make that assumption because back in 2020 – Priti Patel and MI5 were completely silent when 14 ministers in Boris Johnson’s government and two MPs on the Intelligence and Security committee were caught having received donations from individuals and companies linked to Russia’s Kremlin. The so-called ‘Russia Report‘ was then deliberately delayed, then buried and when it finally came to air in public was heavily redacted.

Even so, that report said Russian influence was “the new normal” and its findings also said that the government had emphatically failed to investigate interference by the Russian regime. The same month, Evgeny Lebedev the son of a very senior Russian KGB agent – and Tory Donor, was handed a seat in the House of Lords by Boris Johnson. The year before, well-connected Russian oligarchs were caught heavily involved in lobbying for Russian interests and had ramped up their funding … yes, you guessed – of the Tory party.