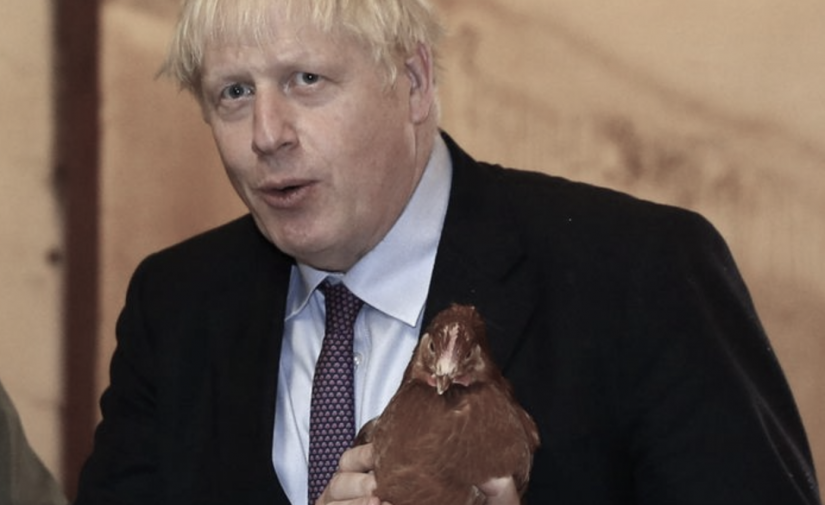 By TruePublica: Blatant state censorship of the media is something we all understand to happen in non-democratic countries around the world. But one of the very last places on earth you would expect the state to fully manage the media, and by manage I mean – gagging, refusing questions and actually banning the filming of the Prime Minister – on a micromanaged publicity stunt, smacks of something straight out of China’s communist regime.

Full media restrictions imposed by the state meant that on Boris Johnson’s first visit to Wales as Prime Minister, the event went completely unchallenged by any journalist wanting to ask questions and film the encounter.

Welsh-based journalists were barred from broadcasting any form video or audio from a so-called media “huddle” with the PM, who was pictured posing with chickens at a farm in Newport. No one-on-one interviews were allowed at all.

Johnson’s visit had a standard pool arrangement in which a network camera – in this case ITV – was allowed to film and one journalist asked questions. In some circumstances, this is not so unusual. The footage is then to be shared with other news outlets. However, in this case, it had to be approved first. If not approved, the journalist would have been given pre-approved quotes to read and the broadcast would have been without Boris Johnson. And this is to national broadcaster ITV – in Britain.

This is quite an extraordinary event, which has gone unreported by the mainstream media. It is state censorship on a level not expected in Britain. Some individual journalists have never been treated in such a way in Britain and voiced their concerns on social media as they were not allowed to do so through traditional media channels.

“We as Welsh media were invited to ask questions as part of a ‘huddle’ but on arrival, it turned out we wouldn’t be allowed to film it,” he said. “So I’m invited to ask a question but can’t record it on camera and so can’t include it in my report on tonight’s ITV Wales news. The clip in my report, therefore, will be a ‘pool’ clip, collected by colleagues at ITV network and shared.”

Masters went on to say: “I hate to have turned down the chance to challenge Boris Johnson but I wouldn’t have been able to broadcast any of it. I’d have had to read quotes to the audience tonight.”

In a video shared online, Masters said Johnson was “doing an interview with a national network that will be shared all over the UK, but for ITV Wales what we were offered was the chance to ask him some questions but no chance to film it.”

“Well, what’s the point in that? I can’t show you that. So I’ve refused that offer.”

Evans confirmed both BBC Wales and ITV Wales were “refused the opportunity to ask Boris Johnson a single question on camera”.

And Bevan tweeted: “Sadly, my first ever op with a PM didn’t go as planned. Told that I only had one question and no audio collected from the huddle was allowed to be broadcast.

“I was then told to join the network pool (which is not something I’ve ever had to ask to do before) but was not allowed to ask any questions.”

The NUJ’s Welsh Executive Committee condemned the way the visit was run, saying Johnson should have allowed recording for broadcast.

“Correspondents from Welsh broadcasters and newspapers, which require a video of interviews for their websites, have different questions to ask than correspondents from London-based media,” the committee said.

“If the Prime Minister restricts himself to a single clip for the network pool, plus a brief off-camera ‘huddle’ with journalists, then essentially the Welsh media is being asked to cover a publicity stunt without the chance to question him.

“Journalists must be able to hold our elected representatives to account on behalf of the public and the Prime Minister’s answers must be publicly available.”

A spokesperson for No 10: “The PM did a huddle with regional journalists and he gave six questions on camera and a pooled media opportunity.”

Belfast News Letter political editor Sam McBride, also the I’s Northern Ireland political editor, has since criticised a further lack of opportunity for journalists to quiz Johnson on his visit to Belfast today.

McBride tweeted: “Ex-journalist Boris Johnson will not be holding a press conference in Belfast to answer journalists’ questions. I understood yesterday that consideration was being given to a press conference. Even when under enormous pressure, Theresa May took media questions in Northern Ireland. The PM at least held some sort of press conference in Wales yesterday, even if the broadcast rules were decidedly odd. Johnson is soaring in the polls but there’s a danger he repeats Theresa May’s 2017 election mistake of being seen to hide from scrutiny.”