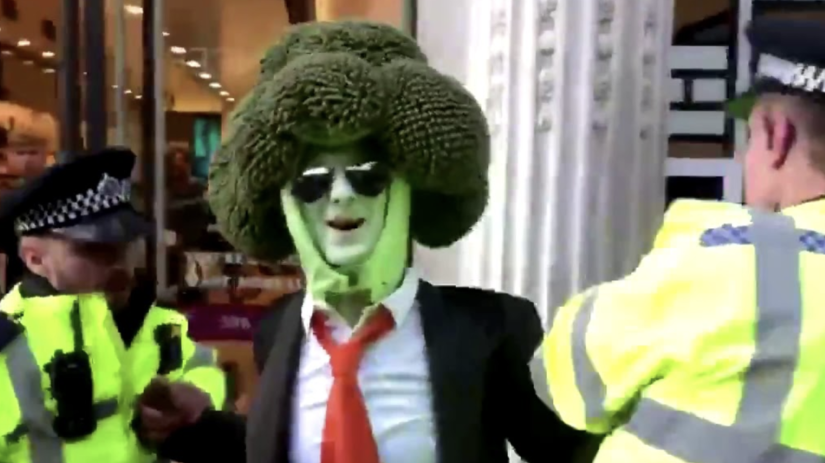 By TruePublica Editor: The Met Police is facing a growing backlash following its decision to ban Extinction Rebellion protests across London last Monday. In reality, this is about the government losing control.

The Mayor of London Sadiq Khan said he is “seeking further information from senior officers” as to why the ban “was necessary.” He should ask the Home Office or the Prime Minister.

The group has brought widespread disruption to parts of central London over the past week to highlight the growing climate emergency. It has drawn support from just about every profession and all age groups including – scientists, doctors, grandparents, school kids and even religious leaders – many of whom are among more than 1,400 people who have been arrested so far. Many more will be adding to that tally by the end of this week.

The group has three basic demands: for the UK government to tell the truth about the climate and ecological emergency; for it to adopt a target of zero carbon by 2025; and for the government to set up a citizens’ assembly to decide future policy on the environment.

Leaving aside the climate crisis and Extinction Rebellion for a moment – something more sinister is going on. Since last October, Extinction Rebellion has become the fastest-growing environmental organisation in the world (read this article from Germany) which has shocked the government, especially after the Queen’s speech on Monday where law and order was central to Boris Johnson’s propaganda campaign devoted to the upcoming election. Extinction Rebellion has just amply demonstrated that the government is not in control (of civil disobedience). And to make matters worse, the authorities are making martyrs of the arrested that amplifies a message that a majority of the electorate support.

Last April – more than 1,000 people were arrested at Extinction Rebellion climate protests, in what organisers described as the biggest civil disobedience event in recent British history. The difference was that last April, London was not ruled by what is essentially a police state. Today it is. Last April, civil disobedience was not high of any government agenda – today, it is.

Britain is just recovering from the shock tactics of a government who have challenged the High Court and Supreme Court, which effectively attempted to highjack democracy to ‘take back control’ of its policies irrespective of the wishes of representative democracy. Threats of civil society fracturing even further and spilling out onto the streets now poses a substantial challenge.

The Green MEP Molly Scott Cato tweeted: “A terrible sight in a democracy.”

Caroline Lucas tweets – “Police action in Trafalgar Square is huge over-reach of police power – there’s a right to peaceful protest in this country The #ClimateEmergency needs us all to make our voices heard. I stand in solidarity with the rebels for life #ExtinctionRebellion

Director of The Good Law Project, Jo Maughan QC tweeted – “The fact our politics is in disarray makes it even more important that we zealously guard the few remaining spaces where people can be heard.”

Diane Abbott tweeted – “This ban is completely contrary to Britain’s long-held traditions of policing by consent, freedom of speech, and the right to protest.”

We’ve had several years of that awful right-wing racist Tommy Robinson punching people in the face with his thug lieutenants destroying property and threatening people, but when non-violent peaceful protestors lawfully exercise their rights a police state is declared in the capital.

George Monbiot – The Guardian environmental columnist tweets a thread in readiness for his contribution today (Weds):

“On Wednesday I intend to be arrested at #ExtinctionRebellion. These are my reasons: 1. History shows that when people are prepared to jeopardise their own liberty, other people realise that they mean what they say, and take their campaigns more seriously.

I have urged other people to join  @ExtinctionR and many of them have been arrested. It would be wrong to encourage other people to do something I am not prepared to do.

As a white, middle-class man with an established career, I am less vulnerable than the great majority of other people. I feel I have a moral duty to use this privilege for the sake of those without such liberty and without my voice.

I have had a good and fulfilling life. I must do everything in my power to ensure that other people have the same opportunity, including the people of other nations, children and the unborn. #ClimateBreakdown will deny this chance to many millions.

After very nearly being killed several times while working as an investigative journalist in West Papua, Brazil and East Africa, sometimes on almost suicidal missions, almost the only thing that still holds fear for me is our inaction in the face of environmental crisis.

When you have come within a hair’s breadth of being killed by military police in north-eastern Brazil, being picked up for obstructing a road in central London is of no consequence at all. This is my duty, and I intend to fulfil it.”

And there’s another point to raise.

Given that XR has now been banned from protesting in London it will be interesting to see how the police will distinguish between ExtinctionRebellion and the PeoplesVote protesters this coming Saturday. What happens if some XR protestors join in on a different protest – will they be targeted? Will the police react the same if London is disrupted by pro-Leave Brexit protestors?

And as the prisons and police jails are all full, will detention centres/camps suddenly appear in week two of XR’s plans?

Either the UK has the right to peacefully protest or it doesn’t. And if it doesn’t, then we have to call out the government for what it is.

Can you imagine what might be said if Russia’s Putin did the same in Moscow and just how the mainstream media in Britain would frame that outrage?

People in Britain fought for their right to the principles of democracy over the centuries, and they fought those in power for it. The right to protest is a fundamental part of those democratic rights and inbuilt into the history of the nation. When a peaceful protest is stopped by essentially changing the rules to suit, then we all have a duty to defend our rights against what is effectively an authoritarian state. So when Nigel Farage and Boris Johnson talk of being the people’s representatives and shout loud of dismantling the establishment ‘brick by brick’ – where are they?

Ellie Chowns MEP tweeted – “Last night I was arrested in Trafalgar Square while defending the right to peaceful public protest. That right is central to a functioning democracy. Yesterday, public protest was banned throughout our capital city. This is a completely unjustified and disproportionate measure.”

This is an emergency for the government and they are treating it as one. Whether you support Extinction Rebellion or not, the government has sent a strong message. Being in London wearing something as simple as a T-shirt (for now, it’s about announcing your support for environmental action) means you could be arrested. This is Britain. I have for years said this moment would arrive and it has. This the new benchmark should alarm us all.