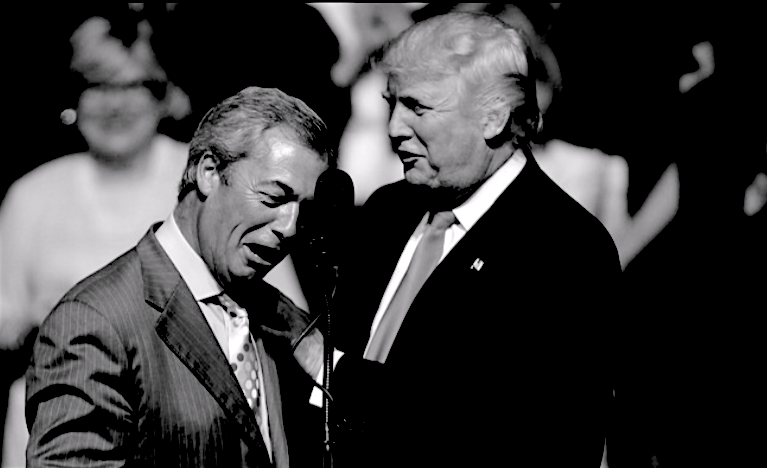 TruePublica Editor: For a long time now, I have taken the view that Britain is well along the path to being ‘Americanised’ and Brexit was the last piece of a puzzle that was years in the planning. A cowardly David Cameron offered, under internal pressure, a referendum on EU membership to save him from defeat at the ballot box in May 2015 when dark money, secretive deals and power-players mobilised as one. Their highly illegal activities were unearthed by The Guardian, Observer, Independent, OpenDemocracy and now, even the Electoral Commission agree that democracy came second in the referendum. The police are now investigating and MP’s look set to change laws. In the meantime, Britain surges towards a no-Brexit catastrophe driven by a hard right-wing faction who care little for liberal democracy, civil liberties, human rights, real capitalism or the principles of basic decency. In reality, Brexit signals the full Americanisation of Britain, which will be its last gasp as an international force on the world stage before sinking into obscurity having been pillaged by the corporations and individuals who funded it.

From The Brexit Syndicate comes the updated story of those involved, the people, the organisations and their motivations. Whether your a Brexiteer or Remainer, the evidence continues to mount that democracy was not the political tool used to reach the moment that changed the course of history for Great Britain.

The ‘Bad Boys of Brexit’ did not act alone. Behind them lies a murky network of powerful and secretive organisations –  a network we have called The Brexit Syndicate. Together these organisations are rewriting the rules of British democracy to suit themselves. Read on to find out how and join us in the battle for democracy, peace and prosperity.

The slim majority that voted for Brexit in June 2016 came as a shock to the British political establishment, most of whom had complacently expected a victory for Remain. The Conservative and Labour parties were equally bemused and struggled to find a response that served their parties. The Prime Minister resigned, forcing the Conservatives to find a new leader and leaving the country without leadership. Meanwhile, Labour was engaged in their own internal battle over a leader who was not supported by the majority of his MPs.

While many of us were in shock and grief, those who had driven the campaign to leave the EU, many of whom had been planning this moment for 30 years, rapidly began organising to gain the maximum advantage for themselves and their causes. Following the central principle of disaster capitalism – ‘Never waste a good crisis’ – they began lobbying to install those who shared their extreme Brexit position into key positions of influence. And they began establishing and building organisations that would lobby government to ensure that Brexit was not wasted as an opportunity to push forward the next stage of the global reign of free markets.

From privatisation and co-option of national governments, they have moved on to writing the rules of global capitalism in favour of the 1%. In doing so, they plan to use trade treaties to eliminate the standards and protections politicians have fought for over the past four decades, subverting the democratic process to ensure it works for the few, rather than the many.

So what sort of future do they have in store for us all?

Recently, a memo was accidentally leaked on the website of one of the Brexit syndicate’s key organisations, the Initiative for Free Trade. It reveals the existence of self-styled ‘shadow trade talks’ where right-wing US campaign groups including the Heritage Foundation and the Cato Institute join hands with the Initiative for Free Trade to build a trans-Atlantic alliance that can make their long-cherished ambition of an economy free from political meddling a reality.

It is clear that Brexit has divided the country. In spite of rhetorical noises to the contrary, the Conservatives have decided to entrench these divisions by negotiating an extreme version of Brexit rather than seeking to consult widely to ensure a future for the UK outside the EU that the majority of people can support. In this project, they appear to have been captured by a number of extreme organisations who are exercising extraordinary influence over government policy to the exclusion of the majority of citizens and interest groups. This website reveals the story of these organisations and the ‘citizens of nowhere’ who are using them to manipulate our political system to their own advantage and to the detriment of the vast majority of UK citizens.

The combination of austerity and bureaucracy has left many British voters feeling oppressed and powerless. No wonder the slogan ‘Take Back Control’ was so appealing. But what is on offer here is a false freedom. Those who felt they had nothing to lose by voting for Brexit had taken for granted many of the freedoms our ancestors fought for and which are now under direct attack.

We should make clear our gratitude to the small but dedicated band of journalists and whistleblowers who have committed to exploring the power relationship behind the Brexit process, without whom we could not have gathered together the information we are sharing in this website. The leading light is, of course, Carole Cadwalladr, whose courage and tenacity was rewarded with the Orwell Prize. Chris Wylie and Shahmir Sanni have shown courage and true patriotism in sharing what they know to defend democracy and the rule of law in our country. We are aware how much we owe particularly to the Guardian and their journalists, including Juliette Garside and George Monbiot, and to the Financial Times. Adam Ramsay and Peter Geoghegan at openDemocracy have also done a great deal of painstaking and highly illuminating investigative spadework, as have Peter Jukes and the team at Byline.

We have structured this website around three areas that are essential for any democratic society but in which Brexit offers us anything but freedom.

To find out who is in the Brexit Syndicate, click on the links below or the thumbnails above to read about each organisation: