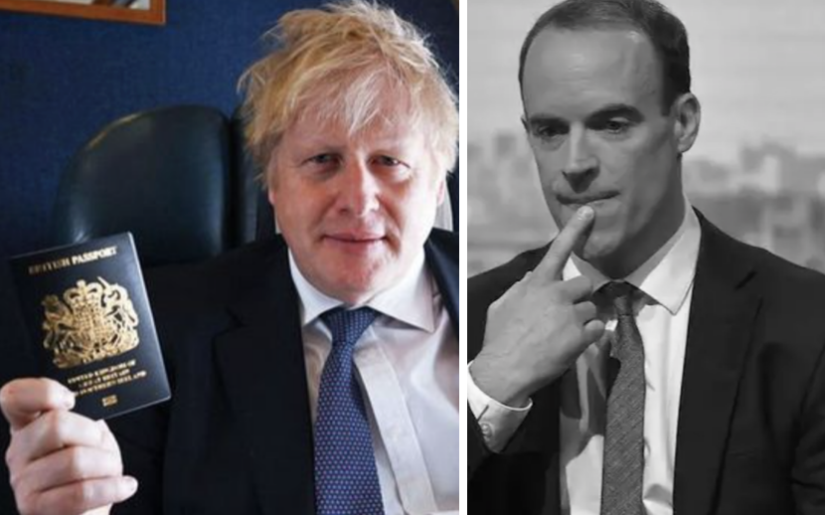 By TruePublica: The British state via the Foreign Office, headed up by Dominic Raab has confirmed that British citizens arrested overseas through no fault of their own have no right to the government’s assistance or protection, even if they are tortured or held as diplomatic leverage against their country.

In 2016, just before the EU referendum that led to Brexit, the British passport was the most powerful passport in the world according to the Global Passport Power Index. Today, it is ranked 18th behind countries such as Portugal and Greece with Germany, Sweden and Finland taking the top three positions for the first time in history.

Worse still, British citizens now find themselves in the unnerving position of knowing that the British passport, is in fact, now just a travel document but otherwise completely worthless.

The earliest recorded British passport can be traced back to the year 1414 with documents known as safe-conducts. These appeared in an Act of Parliament under the reign of Henry V. In 1794, all passports began to be issued by the Principal Secretary of State for Foreign Affairs, who we would now call the Foreign Secretary.

Originally, the concept of a passport – of being under one ruler’s protection, while in the lands of another, was to grant safe passage to an individual and most people believe today that should they get into trouble in a foreign country, they can depend on consular assistance from their own government. In fact, the government states that if you are a British passport holder you are a ‘British protected person‘ and that you only lose that status if you gained any other nationality or citizenship.

The government also states that as a British passport holder you – “get consular assistance and protection from UK diplomatic posts.”

However, that status no longer exists. As at 28th December 2020, the government has now confirmed that British citizens overseas have “no legal right to consular assistance”, Sarah Broughton, the head of consular affairs at the Foreign Office, wrote in a letter obtained by The Times.

Under international law, Britain is entitled, at the very least, to consular access and ultimately to seek redress through the international legal system should a British subject be, for instance, falsely accused of a crime. But in a further admission, the government has also confirmed that where trumped-up charges imposed by a hostile state that then tortures a British subject – it no longer has any obligation to act at all. The government has confirmed that it will “no longer investigate mistreatment allegations.”

The question must now be asked – what is the purpose of any government if it fails in its primary duty to protect its own citizens? And this also leads on to Brexit – because the government pushed it as a question of sovereignty over the economics or even constitutional law.

The entire future prospect of Gt Britain was eventually placed upon fish in negotiations with the European Union. It now appears that fish are more valuable to the British state than its own citizens. What message does that send – other than to say that the British state is now too weak and too cowardly to stand up for its own.

This story of weakness and cowardice is exemplified by the deplorable handling by the British state of the case of Mrs Zaghari-Ratcliffe, whose ill-treatment in detention amounts to torture, according to the United Nations. Here the government has confirmed that it “does not recognise her detention as hostage-taking”, or that torture has been inflicted at all – even the Foreign Office has previously made clear she is innocent.

It is evident that Brexit has made Britain weaker internationally. But this government has weakened it even further and every day that Mrs Zaghari-Ratcliffe remains in Iran confirms that position. British citizens should now be aware that any foreign state can kidnap and torture with impunity and it will be met with no response at all from Britain’s Foreign Office.