In June 2016, Lord Ashcroft’s poll discovered that one third (33%) of leave voters said the main reason was that leaving the EU “offered the best chance for the UK to regain control over immigration and its own borders. For all of the many other reasons that voters decided to vote Brexit, immigration, you could argue, dragged that vote over the line. It was the one enduring story that could and was manipulated by the right-wing press in Britain in each and every electoral step to this moment. 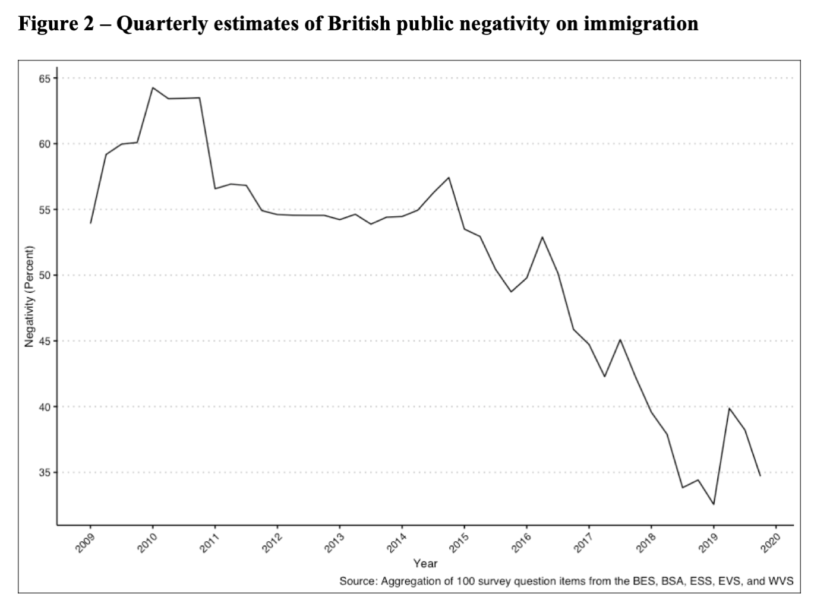 Patrick English is Associate Lecturer in Data Analysis at the Exeter Q-Step Centre, University of Exeter. Here is his take on that graph:

“Here we see in greater detail the average decline in negativity from the turn of the last decade, with the peak around 2010 followed by something more resembling a jagged mountain face than a cliff edge. The sharp, short-term peaks in anti-immigrant mood as we travel down the ten-year slope are seemingly clustered around important electoral events surrounding Brexit: the 2014 European Elections won by UKIP, the build-up to the referendum itself in 2016, the General Election in 2017 where Theresa May sought a parliamentary majority for her Brexit plan, and then the 2019 election campaign featuring Boris Johnson’s pledge to “get Brexit done”.”

It was the Tory party that failed to dampen down the shrill voice of political extremists like Nigel Farage. In so doing, instead they got on side to take his support by backing an in/out referendum over membership of the EU. At the most charitable one can be towards David Cameron, a man who proved to be nothing more than a public relations executive for the corporations – miscalculated and the public believed the nonsense that was being shoved down their throats. It was a huge campaign that almost no-one knew was happening until a few months after the result.

Social media, especially Facebook – in conjunction with another of the world’s biggest manipulator of information effectively manufactured consent. You can see from the statistics that each time the Tories have had a challenge – such as an election, they ramp up the anti-immigrant rhetoric. It has worked for them 100 per cent.

However, the pandemic has shown who was on the side of public health – and it wasn’t a Tory government. In fact, when taking that graph back even further, it shows public sentiment is the same today as it was in 1995 when hardly anyone in the country listed immigration as an electoral issue.

The pandemic has clearly demonstrated to the public that Britain needs immigration. The agricultural industry has been discarded as a bargaining chip in trade negotiations with Trump’s America. And because America can’t get inside the fishing industry, the government are supposedly making a stand by fighting the corner of that industry – that will eventually give it away for other concessions.

The anti-immigrant sentiment that was whipped up in Britain by the Tories and its stenographers in the guise of the Express, Sun, Telegraph and Mail has now disintegrated in the face of a live-action crisis that was reported by all the media – whilst everyone was at home and concentrating on it.

The public now sees the thin veneer of this governments’ ideological position and now know they are not acting in their best interests. Watch what happens over the next few weeks as the Tories change tactics, start a new slogan and try to convince the electorate that we must ‘save the economy,’ ‘look away’ and ‘move on.’ They will look to embrace the people they worked so hard to demonise and garner sympathy for the difficult position that they are in – and then when everyone is looking the other way – do what they have done over the last decade – enriched themselves on something else. There are many scandals to come from this government.