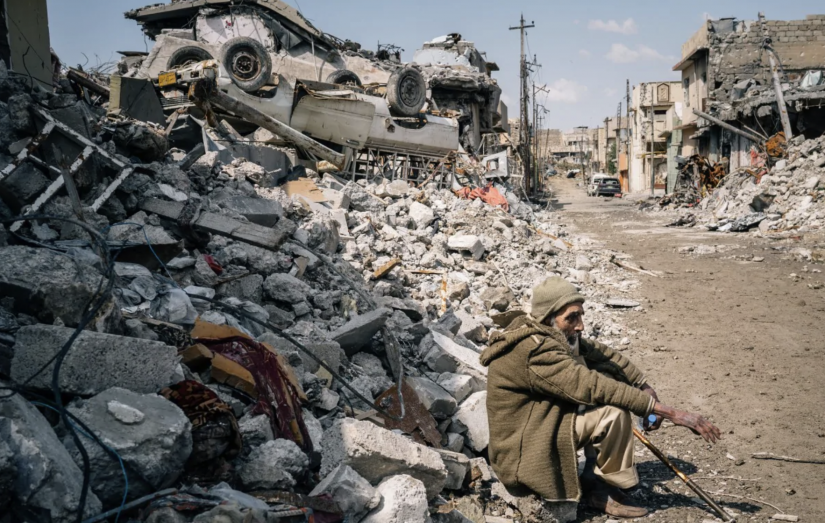 Editor comment: The article below describes how the UK’s most senior counter-terrorism police officer sees a blowback reaction from young Muslim men in our own country who originate from the countries that Britain has attacked recently. It describes how 60,000 members of paramilitary forces have died at the hands of drone strikes, special forces and their proxy boots on the ground since the politically announced end of hostilities. It also says that ‘many thousands of civilians have been killed’  – without attempting to put a more accurate number to the deaths of innocent civilians. The British government, in a propaganda campaign, have claimed that they are responsible for killing 4,000 ‘enemy fighters’ in Iraq and Syria and killed just one civilian. The US military claims to have killed 120 civilians in its coalition carpet-bombing campaign. One only has to look at this timeline infographic to see the true horror of the airstrikes campaign since we were all told our troops were coming home and the wars had ended. 17,000 airstrikes later and we are supposed to believe that just 121 civilians have been caught up in a sustained campaign of terror and death. To believe such nonsense would be moronic.

UK based Airwars – monitors known and counted fatalities from Western airpower military actions. Its bodybag count sits at just over 13,000 innocent civilians in Iraq and Syria (not forgetting separate numbers for Afghanistan and Libya). However, locally reported civilian deaths are recorded as up to 30,000 in Syria and Iraq. Another report shows how out of just one set of airstrikes the US coalition claimed 1,257 deaths and then recorded 337 as being “fair.” Using that set of numbers alone and calculating for the 60,000 enemy fighters below – civilian deaths are now up to nearly a quarter of a million – and this will only be scratching the surface. Now add injuries that ended with death, death from a lack of hospital equipment due to sanctions, the loss of clean water and enough calories when communities got cut off – and that number can easily be doubled. Read the article below, which makes a very good point but keep in mind the numbers of those young men and women who have felt directly or indirectly the loss of members of their family, had their businesses, villages and communities totally destroyed and just think they you might feel. This is how blowback happens.

By Paul Rogers: Few in the west know about the war fought on their behalf in Syria and Iraq. But they may come to know the rage that 60,000 dead have inspired.

The war on terror is almost eighteen years old. George W. Bush declared it a few days the 9/11 attacks in New York and Washington, and at first, it all seemed to go the way he wanted. It took less than three months to terminate the Taliban regime in Afghanistan and disperse the presumed remnants of the Al-Qaida movement. Immediately Bush extended the war to an “axis of evil” of Iraq, Iran and North Korea; in early 2003 an intense war brought down Saddam Hussein’s regime in Iraq in just three weeks.

In Washington the expectations were that there was little more to do: Afghanistan and Iraq would come into the western fold, thereby constraining Iran with no need for another war. More generally, 9/11 had been avenged and the much-vaunted ‘new American century’ would be back on track. Such was the hubris.

Now it all looks so different. The only victor in the Iraq war turned out to be Iran, its regional influence substantially increased. In Afghanistan, US negotiators are near-desperate to do a deal with the Taliban: whatever the long-term consequences, they need to get ten thousand troops back home before Trump seeks his second term in the White House.

Even now, the UN reports that Islamic State is reinventing itself as a virtual caliphate with well-funded units and associates operating not just in Iraq and Syria but in west and central Africa, Yemen, Afghanistan and the Philippines. Al-Qaida is also far from finished and the UN is warning of an increased risk of attacks in western states after a two-year lull.

Within days of the UN report, Neil Basu – assistant commissioner of the Metropolitan Police and the UK’s leading counter-terrorism police officer – said that his colleagues in law enforcement must change the way they try to prevent terrorism and that this work must be accompanied by a boost to social inclusion. One of his points is that many would-be terrorists in the UK have been born and brought up in the country: they have not fought with extreme paramilitary groups yet have been seduced by IS and others to believe they are defending Islam.

Basu is highly regarded in Whitehall and is seen as a future head of the Met, so his view may well indicate that the failure of past policies has been recognised. State authorities may, at last, accept that marginalised young people, especially angry young men, are more easily targeted by recruiters to extreme movements. It was very different at the time of the London 7/7 bombings in 2005 when Tony Blair’s government insisted that the motives of the bombers had nothing to do Britain’s role in the war in Iraq.

This denial of a connection between domestic terrorist attacks and British involvement in the US-led wars in Iraq and Afghanistan has persisted for more than a decade – even though it was clearly facile right back in 2005 when videos from the bombers-to-be made their motives abundantly clear.

So does that mean that the British can now breathe easy? Now the wars in Afghanistan and Iraq are over, almost all British troops are back home and the Americans are even about to do a peace deal with the Taliban, surely there’s nothing left to drive recruitment to the cause.

That argument is fundamentally flawed. British involvement on the ground is minimal, yes, but consider the huge shift in the last decade to remote warfare, the use of strike aircraft, armed drones, special forces and surrogates rather than tens of thousands of boots on the ground. Operations like these are scarcely reported in the mass media and you have to go to more specialised sources to understand what is happening. Oxford Research Group’s Remote Warfare Programme is one of the very few groups analysing this change, with Airwars and Every Casualty reporting on the consequences.

From late 2014 through to the present – though the first three years were the most significant – a classic and largely unreported remote war, led by the US, has been fought to suppress Islamic State in Iraq and Syria.

The UK has been a key part of this, with the Royal Air Force heavily involved, operating from RAF Akrotiri in Cyprus as well as bases in the Gulf states. Very few western troops have been on the ground, but according to US Special Operations Command, this war has killed some 60,000 paramilitaries through a huge programme of air and drone strikes aided by special forces. Many thousands of civilians have also been killed, but the US, UK and other participants have been very reluctant to discuss them.

Most people in western states know little or nothing about this shadow war, but that is far from true across the Middle East, nor, thanks to social media, among young Muslims in western states. It is a continuing aid to recruiting new followers in countries such as the UK, which is what Basu and others are recognising. But the war is even more relevant in the countries where people are dying because of it.

Put it this way: if 60,000 people have been killed, up to forty times that number – close relatives, extended family and friends, well over two million people in all – will have known them personally. Even if only one in ten of those are deeply angered, that is nearly a quarter a million people looking for revenge or inspired to act in other ways.

These may be near-random statistics, but they do fit in with a common experience of western troops fighting in Afghanistan: ‘kill one Taliban and three take his place’. More immediately, this approach makes it much easier to understand the UN report. Bush’s war on terror is far from over, merely in a short resting phase. It will continue as long as the strategy is to suppress extreme and violent movements without understanding how and where they get their support.

The Shadow War on Terror was written by Paul Rogers – openDemocracy

(Image – An elderly man sits speaking incoherently amid the rubble of a building in the Mosul al-Jadida neighbourhood of Mosul, Iraq, on March 24. (The Washington Post)