The smoking gun evidence in Douma, Syria that should bring the British government down 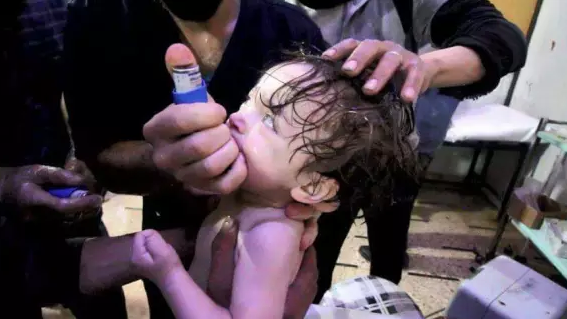 By TruePublica Editor: Today I was going to write about how mainstream media propaganda over the use of chemical weapons in Douma, Syria – had reached hysteria mode two days ago and then suddenly today, stopped. The silence was both abrupt and stunning. The national newspapers went from the outrage of the chemical attack, Russian confrontation and Britain’s saintly ‘humanitarian’ role of bombing another country to, well ….  Ant McPartin’s drink-drive episode in The Sun, The Express, Daily Mail, Daily Mirror, Telegraph – and the Windrush scandal in The Times, the Independent and Guardian. Nothing about the UK, US and France bringing the world to the centre of a truly global crisis.

Mainstream media, the government and the propagandists have just been called out as liars – by one of their own. Irrefutable, hard evidence has just come forward that totally destroys the story of chemical weapons attacks by the Syrian government in Douma. Theresa May and her cabinet now stand in the dock.

Twice winner of the British Press Awards‘ Journalist of the Year prize, and seven-time winner of the British Press Awards’ Foreign Correspondent of the Year, Robert Fisk has been Middle East correspondent since 1976 for various media; since 1989 he has been correspondent for The Independent, primarily based in Beirut. Just to be sure of his credentials though, he has lived in the Arab world for more than 40 years, covering Lebanon, five Israeli invasions, the Iran-Iraq war, the Soviet invasion of Afghanistan, the Algerian civil war, Saddam Hussein’s invasion of Kuwait, the Bosnian and Kosovo wars, the American invasion and occupation of Iraq and the 2011 Arab revolutions. There’s no doubting this man’s C.V.

He has managed to make his journey unaccompanied by Russian or Syrian officials – to Douma, the site of the so-called attack that three Western governments decided was enough evidence to be the pretext for the bombing a sovereign state that could have escalated into something much worse.

Apart from his own account, he gets the testimony of a senior English-speaking doctor at the clinic that treated victims of what a video purported were chemical weapons used by the Syrian government.

That doctor says the video was real, but did not show the effects of a chemical weapons attack. It showed something completely different. This is what the doctor is reported as saying. Below is Fisk’s own account.

Fisk writes his report in The Independent newspaper. Excerpts from that report include “that the ‘”gas” videotape which horrified the world – despite all the doubters – is perfectly genuine. War stories, however, have a habit of growing darker. For the same 58-year old senior Syrian doctor then adds something profoundly uncomfortable: the patients, he says, were overcome not by gas but by oxygen starvation in the rubbish-filled tunnels and basements in which they lived, on a night of wind and heavy shelling that stirred up a dust storm.”

Fisk’s report goes on to say “inspectors from the Organisation for the Prohibition of Chemical Weapons (OPCW) are currently blocked from coming here to the site of the alleged gas attack themselves” and that many eye-witness accounts confirmed that there had never been any gas attacks.

“I walked across this town quite freely yesterday without soldier, policeman or minder to haunt my footsteps, just two Syrian friends, a camera and a notebook.”

As if that evidence was not hard enough to crush the propagandised narrative, here comes another eye-witness deposition: “I was with my family in the basement of my home three hundred metres from here on the night but all the doctors know what happened. There was a lot of shelling [by government forces] and aircraft were always over Douma at night – but on this night, there was wind and huge dust clouds began to come into the basements and cellars where people lived. People began to arrive here suffering from hypoxia, oxygen loss. Then someone at the door, a “White Helmet”, shouted “Gas!”, and a panic began. People started throwing water over each other. Yes, the video was filmed here, it is genuine, but what you see are people suffering from hypoxia – not gas poisoning.”

Hypoxia – caused by too much sand and dust in the air in confined spaces to breath properly was the cause, along with a ‘white helmet’ shot of fear, not a gas attack.

Fisk continues with eye-witness accounts: “Oddly, after chatting to more than 20 people, I couldn’t find one who showed the slightest interest in Douma’s role in bringing about the Western air attacks. Two actually told me they didn’t know about the connection. They shrugged when I asked about the 43 people said to have died in the infamous Douma attack.”

It is clear from this report and the words of multiple eye-witnesses, that no-one had been killed by a gas attack in Douma.

Fisk then goes onto talk about another Western construct – the white knights of this awful war, the so-called White Helmets. “The White Helmets in Douma abandoned their main headquarters and chose to take the government-organised and Russian-protected buses to the rebel province of Idlib with the armed groups.” This is indeed yet more confirmation that this ‘White-Helmets’ organisation, funded by the British government are not there for any other reason than to create stories of propaganda and drum up both hysteria and fear.

Fisk continues to speak to local Syrian people. “They talked about the Islamists under whom they had lived. They talked about how the armed groups had stolen civilian homes to avoid the Syrian government and Russian bombing. The Jaish el-Islam had burned their offices before they left, but the massive buildings inside the security zones they created had almost all been sandwiched to the ground by air strikes. A Syrian colonel I came across behind one of these buildings asked if I wanted to see how deep the tunnels were. I stopped after well over a mile when he cryptically observed that “this tunnel might reach as far as Britain”. Ah yes, Ms May, I remembered, whose air strikes had been so intimately connected to this place of tunnels and dust. And gas?”

This is evidence that the Syrian and Russian military were indeed bombing – terrorists, not their own people.

This is the testimony of a highly respected Western journalist who has actually visited the site of the alleged atrocity and provided eye-witness accounts, unlike the desk-bound press pack of the mainstream media back in London. It was they who told the world to hold its breath in case Russia reacted. Fortunately, Russia kept a calm head and today’s headlines are about bloody Ant McPartin and not the beginnings of a catastrophic conflict.

In July 2010, Theresa May said in a speech “that national security is the first duty of government.” That speech was about a key part of the Government’s pledge to rebalance civil liberties and the powers of the state. The Home Secretary at the time, Theresa May, promised to correct “mistakes” made by the Labour government which, she said, was allowed to “ride roughshod” over civil liberties. She has done neither, in fact, quite the opposite.

If anything, Theresa May and her cabinet should hang their heads in shame. They are clearly not fit to run the government and not fit enforce policies of national security if they are prepared to risk every man, woman and child to keep them in power on the basis of a cooked up story supported no by evidence whatsoever.

Read the full account by Robert Fisk in The Independent HERE