The war on the poor 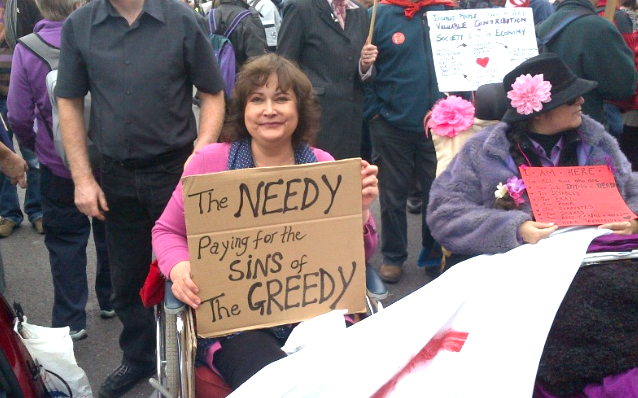 TruePublica: This is the latest depressing news of the ideological war on the poor in Britain. Although much of what is reported below is known to some extent, most of the stories below were reported in just the last few weeks. This article then highlights some interesting facts, the underlying reasons for these deliberately driven social disasters, the ideology behind it and concludes with what might come next.

Feb 2019: The Living Standards Outlook 2019 by the Resolution Foundation concludes that poor wage growth and continued cuts to welfare benefits will push a further one million children into poverty by the end of this parliament. That is an increase of 25 per cent from the current 4.1 million already suffering the social scourge of poverty. But we are not just talking poverty – it is child poverty.

The report also warns that many UK families are facing years of stagnating living standards, with the number of households living below the breadline set to hit a new record high by 2024.

The analysis suggests that low-to-middle income working households real disposable incomes in 2023-24 will be no higher than they were in 2003-04, with projections looking particularly bleak for the very poorest families.

Feb 2019: Homeless charities have warned that England is facing a “national emergency” after it was revealed that the number of homeless people and rough sleepers admitted to hospitals has more than trebled over the last six years.

Analysis of NHS data by Mirror Online reveals that 10,259 homeless people in England were admitted to hospitals in 2017-18, compared to 2,950 six years earlier.

The data also shows that the number of homeless people dying in hospitals has skyrocketed by a shocking 365%.

Jan 2019: A Parliamentary question tabled by Labour has revealed that 40,000 pensioners are set to lose an average of £5,500 a year as a result of no longer being eligible to claim Pension Credit.

The Government has announced that from May, mixed-age couples on low incomes will no longer be eligible to claim Pension Credit when the older partner reaches State Pension age if the other hasn’t, but will have to claim Universal Credit instead. The number of couples affected is likely to rise further as more couples are required to claim Universal Credit rather than Pension Credit over time.

Feb 2019: It has emerged that as many as 20,000 sick and disabled claimants have died while still potentially owed overdue back-payments by the UK government.

Neil Gray MP, SNP Social Justice spokesperson, said the UK government must finally “get a grip” of the spiralling scandal, speed up the repayments process, and launch an urgent DWP-wide review of procedures to identify and prevent further payment errors. The error dates back to 2011 and was first identified in December 2016 but the situation has not been resolved and further errors continue to emerge.

TruePublica’s report – ‘Killed By The State‘ authored by independent disability studies researcher Mo Stewart is a truly damning indictment of the Department for Work and Pensions and the scale of avoidable death inflicted on the sick and disabled. Here, the lid is lifted and what you see is the welfare system being deliberately dismantled – and worse, managed by American corporations.

The gap between the very rich and the rest is wider in Britain than in any other large country in Europe, and society is the most unequal it has been since shortly after the First World War.

It only took 40 years to reach peak inequality and Brexit is quite likely to exacerbate this situation and create yet more inequality.

Danny Dorling writes in the New Statesman – “Nowhere are the repercussions of living with gross inequality more evident than in health. The physical health inequalities that come with tolerating the highest income inequalities in Europe are not as extreme as the damage to our mental health (as documented in Richard Wilkinson and Kate Pickett’s new book The Inner Level), but they are still shocking. For instance, a child born in Sweden is half as likely to die in childhood as a child born today in the UK. There are no causes of death among children that are significantly more frequent in Sweden than in the UK. By 2015 the UK ranked 19th out of 28 in the European league table of neonatal mortality: deaths within the first 28 days of life. In 1990 we had ranked seventh. Bulgaria ranks 27th and Romania 28th, but infant mortality in both is falling. Since 2015 we have seen a statistically significant rise in infant mortality across Britain: no other state in Europe has experienced that. And this is despite, not because of immigration.”

The cause of this social violation, the division and awful output is purely a political issue, not economic. Right-wing politics is such that it determines certain social orders and hierarchies, which are inevitable and natural or even desirable, typically support this position on the basis of natural law, economics, or tradition. Inequality is therefore viewed as a natural result of traditional social differences or the competition in market economies. It is effectively the law of the jungle. The fittest survive.

Dorling demonstrates this law of the jungle ideology with some interesting statistics. He says, which we have just started to become aware of, that everywhere else in Europe, life expectancy is rising faster than in the UK.

“Until 2015 the UK had not experienced growth in numbers of grieving parents since during the Second World War – when infant mortality last rose for two years in a row.” Previous reports tell us that life expectancy is falling because the old are not getting older – not because the statistic itself is being dragged down by the number of deaths of those under 28 days old.

Again, we are all aware that 1.3 million food parcels were given out in the year to April 2018 but we might have forgotten that there was no such thing as a food bank in the 1999s, and as Dorling points out the soup kitchens of the 1930s all disappeared once equality rose high enough.

“When the income share of the bottom 90 per cent is used as the comparator, today our levels of inequality are the same as in 1930. That is why the soup kitchens and feelings of hopelessness have returned.”

This modern form of inequality only took about 40 years to reach such highs. I disagree in part with Dorling’s point about when this started but we both agree that with the arrival of Thatcher, what problems were starting to emerge was given huge impetus with political will. Dorling’s research makes the point that in the 1970s we were so equal that we were most similar, as a society, to Sweden.

“We reached an inequality high point in 2007 when the bottom 90 per cent only took home 57.4 per cent of all income, the least they had taken since, tellingly, 1929, the year of the Wall Street crash that began the Great Depression.”

That fall of take-home pay was dramatic. Falling from something like 75-77 per cent steadily from the 1980s. The money lost went straight into the pockets of the wealthiest. Today, the richest 10% of society owns nearly half of all British wealth.

Martin Gilens has documented definitively the “elite economic domination” of American politics – that now infects the British way of life through toxic lobbying and blatant corruption of the political class.

To demonstrate that point is quite easy. You might remember Theresa May’s speech at the doors of No10 back in 2016 where she pledged to fight for the many, “not the privileged few”. But once in charge, the statistics of inequality and poverty which were no longer released under David Cameron continued to be covered up. And that is what it is – a cover-up. Under the Conservatives’ ideological austerity regime, the tax office HMRC has not received funding rises, in fact, quite the opposite – despite the obvious benefits of better-regulated taxation in helping reduce the deficit – which is how austerity was sold to everyone.

The Conservatives appear to have instructed HMRC not to make the publication of income inequality statistics a priority and then financially strangled them.

No mainstream outlet even bothers to report on the ‘tax-gap’ any more. It is the difference between the tax that should be paid in the UK as government and HMRC originally intended and the amount actually paid. The last time it was fully calculated was back in 2014. Oxfam and the Joseph Rowntree Charitable Trust funded tax expert Richard Murphy to investigate and his work concluded that the gap had reached an eye-watering £120 billion, not the £35 billion HMRC admitted to. Given that the Tories have reduced the tax burden to the wealthiest, opposed all EU wide legislation to close that gap and even pledged that the UK will have the lowest rate of corporation tax in the G20, the inequality prognosis looks dire.

This ideological drive, motivated by individual selfishness and excessive materialism that is inherent to contemporary capitalism as is the norm today may well come to a sudden halt a few years post-Brexit. When the ‘left-behinds’, the ‘just about managing’ and not managing at all realise what is coming next will only make matters even worse, and they decide enough is enough, there will be trouble. That will likely not happen at the ballot box as it did the last two times with May’s failed effort to grab power and the EU referendum before it.

Few people remember the 2011 England riots, more widely known as the London Riots. This was a series of riots in August 2011 when tens of thousands of people rioted in 14 London boroughs and then 14 cities and towns across England, which saw looting, arson, and mass deployment of police, and then the deaths of five people. There were 3,000 arrests and 1,000 criminal charges, nearly 3,500 acts of criminality were recorded that caused £200 million of property damage. Detailed studies concluded that racial tension, class tension, economic decline and the unemployment that the recession from 2008 had brought were its root causes.

The government are already preparing for a new wave of riots, because of the very same tensions – that are by far worse than they were in 2011. They call the monitoring of expected street trouble – ‘the battle rhythm‘ – and are already recruiting thousands to combat social unrest. This time, it could get really nasty because there’s a lot to fear from people who have nothing to lose. And there a lot of them today.