Theresa May tells American investors – Brexit Britain is up for grabs 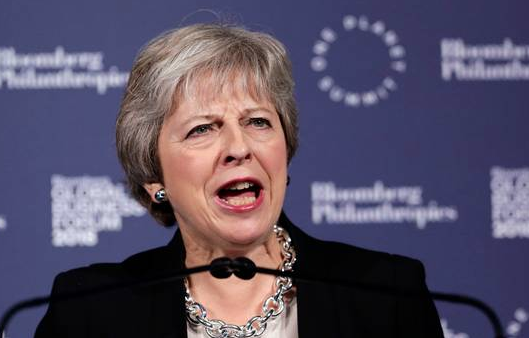 By Graham Vanbergen: Britain will be “unequivocally pro-business” after it leaves the European Union, Theresa May has promised American investors. To neoliberal politicians, this was always the endgame.

The prime minister told the Bloomberg Global Business Forum in New York that the UK will be the low tax, high-skilled place to invest after Brexit.

Speaking days after EU leaders rejected her plans for future trading relations, Ms May will insist she is “confident” a deal can be reached. One wonders from where does this confidence emanate?

Do you get the feeling that Theresa May is setting up the UK/EU trade deal to fail, having primed American corporations and solicited its President in advance – or that she is using the US as a threat to bludgeon EU negotiators into capitulating to her troubled Chequers plan?

My suspicion is that one way or the other a trade deal will be agreed at the expense of the other. Either way, Theresa May will appear to have won something no matter what. But there’s a problem. Any US/UK trade deal will take years to formally agree and its net effect will be to align almost all standards and regulations to theirs.

Even more alarming is that Theresa May has said that the UK has a plan to create an economy which is appealing to investors across the world, with corporation tax the lowest among leading industrialised nations.

The two other leading economies of the EU alongside Britain do not compete on corporation tax.  In France, corporation tax is charged at 33.3% and Germany it is 32.9%. Other struggling member states like Italy charge 27.9% and Spain 25%. Only countries like Albania, Belarus, Bulgaria, Bosnia and Herzegovina, Estonia and Lithuania within the EU charge less. That is of course excepting tax havens such as Ireland that can only survive by charging 12.5% on corporate profits through PO Box addresses – that employs no-one.

Most economic experts agree that tax havens and very low tax countries cause unjust laws, political turmoil, increased inequality and discrimination. The reason tax havens are rich countries is simply because very little money is distributed to the rest of the economy – or in neoliberal speak – nothing ‘trickles down.’ In addition, low tax regimes also attract the wrong type of investment and have demonstrably shown historically to be little more than a race to the bottom.

Ms May said: “My message today is that a post-Brexit Britain will be an unequivocally pro-business Britain” stating that Britain will do the “most dynamic and ambitious free trade agreements with old friends and new allies alike.”

“Crucially we also have a plan to deliver an economy that is knowledge-rich, highly innovative, highly skilled and high quality but with low tax and smart regulation. So let me say this bit very clearly. Whatever your business, investing in a post-Brexit Britain will give you the lowest rate of corporation tax in the G20.”

“You will access service industries and a financial centre in London that are the envy of the world, the best universities, strong institutions, a sound approach to public finance and a consistent and dependable approach to high standards but intelligent regulation.”

This is the language of a Prime Minister that is selling out on Britain as a country. Britain is up for sale to the highest bidder. These are either desperate measures or deliberate actions to prepare corporate America for the deregulation festival that will be on offer come April 2019.

Ms May was dealt a humiliating blow at a summit of EU leaders in Salzburg last week when they rejected her Chequers blueprint for post-Brexit relations. Was this plan designed to fail or was it designed to threaten?

Craig Murray, ex British ambassador commented: “The humiliation of Salzburg occurred because there was never a chance of any sympathy from EU member states for an attempt to dishonour the agreement (backstop” on North/South Ireland relations) of nine months ago. There is no way out of that conundrum. The government has belatedly remembered the existence of the FCO as a potential tool in international relations, and ambassadors in our Embassies in EU countries are currently staring in bafflement at dense and complex instructions urging them to convince their hosts that black is white.”

Ms May went further: “Our relationship with the EU will change with Brexit. This is why I am confident we can reach a deal about our future relationship that is built in this spirit.”

Ms May attended the United Nations General Assembly, where she met with Donald Trump on Wednesday evening to push for a post-Brexit trade deal. Put on the table was a desire for a “big and ambitious” post-EU trade deal with America.

The Independent reports that “such a trade deal is considered an important way for Ms May to help offset the economic impact of leaving the EU in March next year. It was high on the agenda when the prime minister ensured she was the first foreign leader to visit Mr Trump in Washington following his inauguration last year. Support from the US president could boost Ms May’s struggle to win over her critics, who have argued her exit plan is unworkable.”