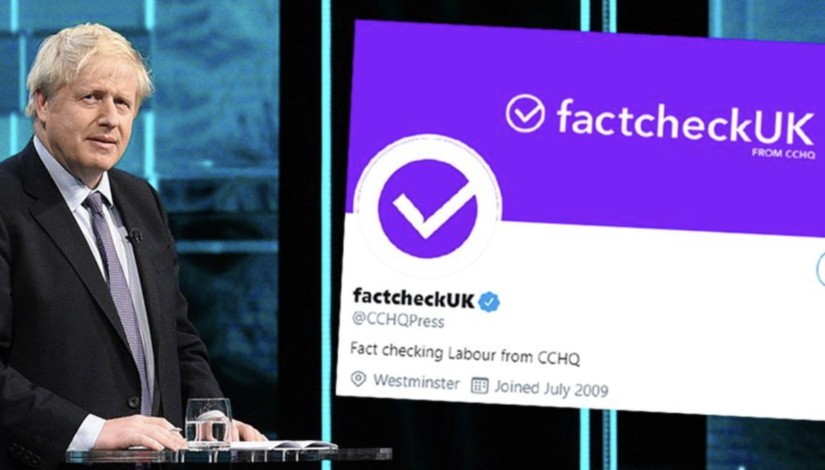 TruePublica’s twitter account was suspended for two days this week immediately after posting an article and video about Prince Andrew. It was about a well-known celebrity news anchor in the USA who openly chatted on a ‘hot mike’ to her producer whilst being filmed, that they had full evidence of the Epstein/Price Andrew story three years ago and that the story was ‘canned’ due to threats from Buckingham Palace. This was not a fake video – it is the truth. After an appeal, Twitter sent several emails saying we could advertise with them if we wanted to promote our Tweets.

Yesterday, the Conservative Campaign HQ (CCHQ) press office, very convincingly, pretended to be an official fact-checker on Twitter, posting fake fact-checks nearly every minute of the ITV debate broadcasted on live TV. Apparently, this is OK with Twitter.

This act of deception by the governing Conservative party tells us all so much about who they really are. What this demonstrated was nothing less than a betrayal of democracy and mendacious treachery of public trust and this contempt for public trust by the government is alarming.

The party took their account Twitter handle @CCHQPress – which is a verified account for the Conservative Campaign Headquarters press office – and temporarily changed it to “factcheckUK”, using a new profile picture, new header, and branded videos and GIFs to make it resemble a third-party organisation. It made no reference to the Conservative Party other than the handle’s opaque acronym.

Full Fact, a real fact-checking organisation were horrified and issued a very prompt statement  about this fraudulent action, saying, “It is inappropriate and misleading for the Conservative press office to rename their Twitter account ‘factcheckUK’ during this debate. Please do not mistake it for an independent fact-checking service.”

Full Fact has reported the account to Twitter Support and doesn’t believe it should be allowed to remain verified while knowingly misleading the public. TruePublica has done the same and received no response and the account remains fully active even though this breaks multiple Twitter rules and its terms of service.

Perhaps it should be described in better detail for Twitter to fully understand what has happened here.

This deception by the governing party is profoundly corrupt. It is a propaganda dissemination strategy – something you might expect in some despotic country on the other side of the world. The Conservative party have quite deliberately gone about this action with brazen intent with which it has no intentions of apologising for and seemingly doesn’t care either.

What makes matters worse is that the Conservative party has adopted the cloak of a fact-checker at a time when it stands accused of peddling lies and disinformation to such an extent that fact-checkers are needed to combat them in the first place. To taint the fact-checkers with this fraud also shows something else. They don’t want fact-checkers to be believed. They are an inconvenience. 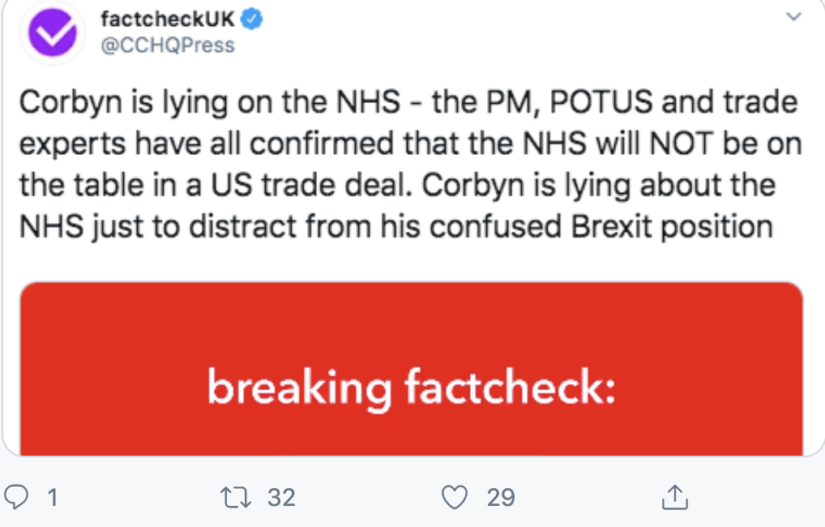 The Tweet above shows the extent of the deception. The Conservatives have only just responded to Freedom of Information requests about the UK-US trade deal negotiations. The response, after appeal, was to forward the meeting documents and leaving aside attendees, was 100% redacted so that the public is left completely in the dark about the NHS in any trade deal with America. One can only assume, they have something to hide from the public.

After 15 minutes or so after the TV debate had concluded, CCHQ turned back to reassuming its original Conservative Party branding with its true identity in its bio, as though nothing had ever happened.

Having taken this lead, how many other political groups will now take this idea and further distort the truth.

Perhaps Twitter should take a real-world look at what its platform is doing here. If it chooses to do nothing – it is deliberately promoting political disinformation and propaganda to help rig elections.

Perhaps after this display by CCHQ and Twitter – it is time to campaign to shut down political parties from campaigning on social media at all.