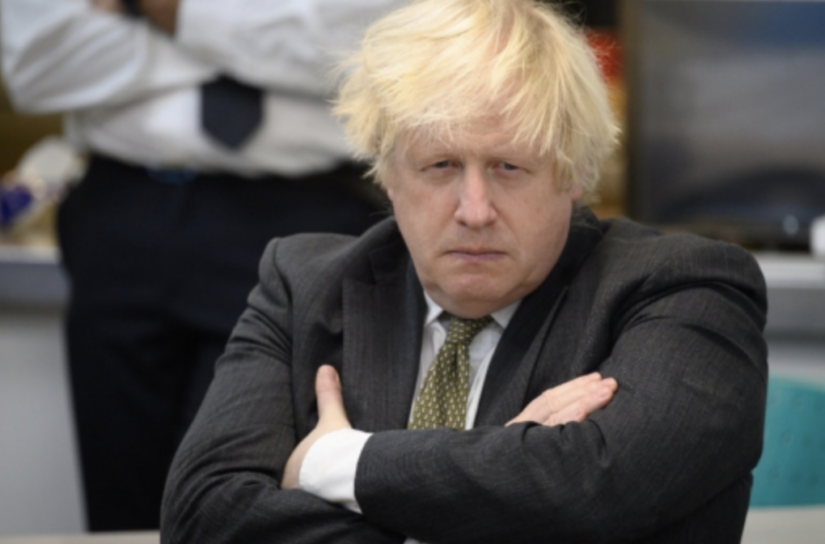 By Henry Porter: Where were all these Conservative ‘freedom fighters’ when Parliament passed the Police Bill

There was something rather chilling about last week’s Conservative Party rebellion against Boris Johnson’s new COVID regulations.

A short time after Johnson had pleaded his case in front of the 1922 Committee, 99 of his MPs decided to ignore him and vote in the name of liberty against emergency measures designed to protect the public and NHS against the Omicron COVID variant. Other Tories, such as the former prime minister Theresa May, abstained.

The size of the rebellion was shocking enough but the strength and heedlessness on display may signal a hitherto unidentified mutation in the party. It suggests that right-wing MPs are tiring of the Johnson premiership simply on the grounds that it is too moderate.

The build-up to the vote, in which the government was seeking to pass temporary laws involving mask-wearing, compulsory vaccination of NHS staff and increased vaccination checks, featured several Tory MPs we are unused to hearing from. These are often people who believe their opinions and prejudices are self-evidently more telling than scientific data. One of those, Marcus Fysh, the MP for Yeovil in Somerset, got an early start with an interview on the BBC’s Today programme last Thursday morning.

Originally an investment manager, Fysh has no scientific or medical training (he studied literature). However, he airily pronounced on Omicron, saying it might actually be a good thing. When the show’s presenter, Martha Kearney, pressed him with doubts and data, Fysh struggled and quickly reached for the self-inflating life jacket emblazoned with the words ‘British freedoms’. With his voice rising a little, he exclaimed: “I want us to talk more about the fact that we are a free country; that we are a democracy and believe in individual liberty.”

Anyone paying the smallest attention to politics over the last few years will have found these words hard to swallow. Indeed, one of the few achievements of this supremely inefficient government is to successfully attack both with unrelenting accuracy.

After all, this government’s record is unarguable. Two years ago, it suspended Parliament illegally. This was followed by a bill to introduce voter ID, which would restrict access to the ballot for many – despite the problem of voter fraud being almost non-existent in the UK.

Caught between numerous self-created scandals and a raft of perpetually outraged backbenchers, Johnson is on the ropes

Another proposal from this Brexit government, still smarting from fines against the Leave campaign, is to dismantle the powers of the Electoral Commission, which has recently fined the Conservative Party £17,800 for failing to declare a donation that paid for the refurbishment of Boris Johnson’s Downing Street residence. The prime minister, incidentally, has so little respect for institutions that it appears he has misled both the commission and Parliament about who actually paid for his wallpaper.

Caught between numerous self-created scandals and a raft of perpetually outraged backbenchers, Johnson is on the ropes. Last Thursday, it was on vaccine passports that Fysh channelled his colleagues’ rage, calling vaccine checks, which are common all over the world, “a massive imposition on our liberties, a massive attack on personal freedom – the freedom of association”. He concluded his radio interview with a message to the PM. “We can’t go down that path… don’t do it.”

One wonders about the Tories’ levels of self-awareness. Clearly, in Fysh’s case, there are no introspective deep dives. How could there be when he voted for England and Wales’s Police, Crime, Sentencing and Courts Bill, objectively a far greater offence to liberty than mask-wearing or vaccine checks?

There is good reason to regard the Police Bill as the most oppressive legislation proposed anywhere in the UK since the Second World War. New amendments include 51 weeks in jail for anyone locking themselves onto each other, objects, or land; the ban of named individuals – in effect, anyone the Home Office regards as undesirable; the suspension of demonstrations if police receive complaints of threatening noise; and greater powers for the police to stop and search without suspicion, with the threat of 51 weeks jail time if people refuse to be searched. The very freedoms that Fysh and others like him claim to defend – those of association and assembly – are being smothered by their own administration.

Ahead of the 14 December vote in the House of Commons, freedom fighter Fysh was again making himself available for interview. “This is not Nazi Germany,” he told BBC Radio 5 Live on Sunday . “It is the thin end of the authoritarian wedge.” His comments were fiercely criticised and by the following day he had already penned a piece for The Jewish Chronicleentitled, ‘I am sorry I compared Covid measures to Nazi Germany’.

Fysh’s comments were laughably untrue. The attack on peaceful protest by his party is truly an authoritarian wedge, precisely the kind of law that the Chinese government is enforcing this week in Hong Kong, sending protestors to jail for daring to commemorate the victims of Tiananmen Square.

Is this cynicism or self-delusion among modern Conservatives? Are they lying to us or simply to themselves? Whichever it is, libertarian exceptionalism – the stance that says ‘I must have my freedom to do what I please, no matter what harm it causes you, while you must at the same time put up with restrictions that I chose to place on you and your political activities’ – is the philosophy of the majority of Conservative MPs. They will selectively quote John Stuart Mill’s ‘On Liberty’, yet fail to acknowledge that, in an otherwise pretty fundamentalist essay on personal autonomy, Mill says: “That the only purpose power can be exercised over any member of the civilised community, against his will, is to prevent harm to others.”

There is a murkier aspect to this story, too: the activity of the CRG, the COVID Recovery Group. Set up by Conservative hardliners Steve Baker and Mark Harper, the group is in receipt of funds that will be used to campaign against the government’s public health measures and so endanger life and the good functioning of the health service. The key part of this, aside from its bewildering irresponsibility, is that £10,000 of these funds – a third of its total funding – is dark money. Questions about the entity or individuals that are trying to influence policy and parliamentary votes behind the scenes must surely interest the Electoral Commission while it still has the power to investigate.

The great tragedy of Britain’s renunciation of liberty and the attack on democratic transparency is that it’s losing its reputation as a free society. In turn, that makes things far more challenging for people across the world who are fighting for freedoms in their own countries.

Take a recent address given by the foreign secretary, Liz Truss, said to be one of the candidates to succeed Johnson once the Conservative Party decides he is an election liability rather than an asset.

Truss’s speech was like a breeze passing through an empty house, lacking in both content and thought. And so, in an effort to make up for the deficiency, Truss resorted to the theme of freedom and what she called ‘the Network of Liberty’, an unnecessary renaming of the free world. Her purpose was not to boost freedom – how could it be, with her government’s record? – but rather to attack the decadent forces of introspection that she alleges have weakened the free world. “Societies turned inwards,” she said. “Rather than engaging with the big ideas shaping the world, failed ideas ran rife, like the post-modern philosophy that there is no objective truth. In fashionable circles, people talked about how we should be ashamed of our history and doubtful about our future.”

The speech is just a words salad with the occasional dig at cancel culture. It does serve one purpose however – to show that there really is no philosophical basis in what these new conservatives believe. They are determined to exercise power and privilege over the general good and are happy to deploy any argument to that end.  In one breath they claim to fight for personal freedom but in the next they legislate to extinguish it.

There is a sense that we saw the party as it truly is this week, full of anger and unreason, unrecognisable from the days of Michael Heseltine, John Major, Kenneth Clarke and Dominic Grieve, making its case with completely fraudulent language of liberty.

As the justice secretary, Dominic Raab, announces a reform of the Human Rights Act, it is worth questioning whether this undertaking should be entrusted to people who are so casual about fairness, our freedoms, and our safety.

Henry Porter is a novelist, columnist for the Observer and London Editor of Vanity Fair.