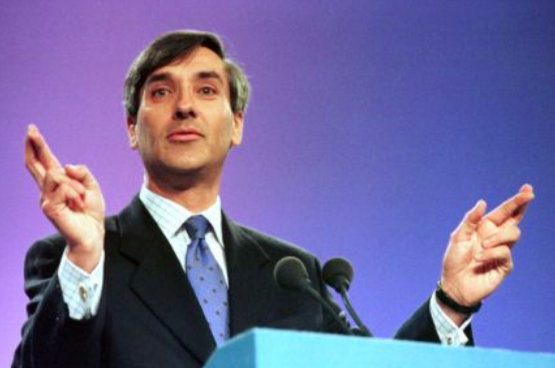 TruePublica Editor: From the archives of The Telegraph comes the story that Tory MP John Redwood had ordered the corporate world in Britain to ‘toe-the-line’ or face the consequences of a post-Brexit Tory wrath that included being forcibly removed from their comfy corporate positions if they failed to do so.

The Telegraph reported that: “Businesses that speak out for Britain’s EU membership will be punished, vows John Redwood.” In that article, John Redwood is quoted as saying  “companies who publicly back staying in EU will pay ‘very dear economic and financial price”, with executives potentially losing their jobs.”

John Redwood has form when it comes to being a member of an extreme band of Brexiteers known as the ‘Ultras’.

An ardent supporter of one of the most important “thinktanks” behind the Brexit propaganda machine is the Legatum Institute. It is a fountainhead of false predictions, delusional thinking and empty promises. Its funding comes from a Dubai-based private investment group backed by a New Zealander who, in the words of a recent Times article, allegedly made his money by “exploiting trading opportunities created by extreme political disruption”. Surely that says something about the motives of such people.

In October 2016, The Legatum Institute sponsored a report called The Road to Brexit. The foreword was by Iain Duncan Smith. Also writing for the report were the MPs John Redwood, Peter Lilley, Owen Paterson and Bernard Jenkin – leading members of the “Ultras”.

The Guardian’s article “No wonder John Redwood backs Brexit. He will make money out of it, after all” explains some of the dynamics and motivations for Redwood’s actions.

From VoxPolitical: How kind of John Redwood to give us all a glimpse of the kind of despotism Tories want to inflict on us all – by trying to inflict it on business bosses first.

“As for the rest of us”, Ask VoxPolitical – “let’s ask prime minister Theresa May the question posed on Twitter by Professor Ian Donald: “How is it acceptable for one of your MPs to threaten people with losing their jobs if they are pro-EU? Do you ignore the appalling behaviour of backbenchers too?”

We know now, that Leave only won with the help of vote-rigging internet companies, so people like Redwood have absolutely no business trying to bully anyone.”

The Telegraph article added the very explicit and threatening quote that: “If they don’t understand that now they will find those of us organising the ‘get out’ campaign will then make life difficult for them by making sure that their customers, their employees and their shareholders who disagree with them – and there will be a lot who disagree with them – will be expressing their views very forcefully and will be destabilising their corporate governance.

This is absolutely crucial that these people get this. That it will be deeply disruptive to their businesses, and maybe even to their own tenure of their jobs if a chief executive with a handful of shares thinks he can put the voice of a multi-national corporation behind a highly intense political argument in one country in which they operate.

It would be extremely foolish and we must make sure they have to pay a very dear economic and financial price were they to try that ill-judged thing.”

The Telegraph then went on to point out that “The former Welsh secretary demanded firms “keep out” of the debate and “beware” not to “meddle in politics” and that “the only answer for all concerned is for big business to keep out and not express a corporate view”.