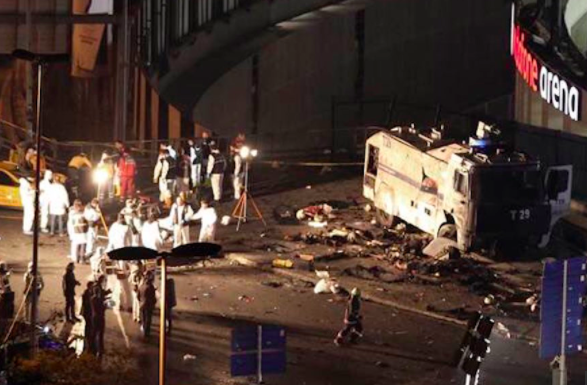 TruePublica Editor: There appears now to be a reason why officials in the USA were able to name the Manchester Arena suicide bomber within four hours of the event. The FBI knew exactly who the perpetrator was and were able to leak huge amounts of data to the American press, much to the vocal frustration of British intelligence. Here’s why:

By Laura Tiernan – Explosive allegations have emerged that the UK’s MI5 intelligence agency had prior warning of Manchester suicide bomber Salman Abedi planning a terrorist atrocity.

On May 22, Abedi detonated a shrapnel-laden improvised explosive device outside a performance in Manchester by American singer Ariana Grande, killing 22 people, many of whom were children, and wounding 116.

According to the Mail on Sunday, “the FBI told MI5 that Abedi was part of a North African Islamic State cell plotting to strike a political target in the UK.”

The FBI passed these warnings to MI5 in January, after placing Abedi on their terrorist watch list in 2016. An unnamed “security source” told the Daily Mail that the FBI informed MI5 that Abedi “belonged to a North African terror gang based in Manchester, which was looking for a political target in this country.”

He continued: “Following this US tip-off, Abedi and other members of the gang were scrutinised by MI5. It was thought at the time that Abedi was planning to assassinate a political figure. But nothing came of this investigation and, tragically, he slipped down the pecking order of targets.”

The claims by Prime Minister Theresa May that Abedi acted as a “lone wolf” and was known by Britain’s security services only “to a degree” lie in shreds. It is simply not credible that an individual planning to assassinate a British “political figure”—that could conceivably include the prime minister, foreign secretary or the queen—would be allowed to “slip” under the radar.

Abedi was effectively given a free hand by MI5 to launch a terrorist attack. The Daily Mail’ s revelations add to mounting evidence of the role of British intelligence services and successive governments in cultivating Islamist terror networks, and protecting these “assets” as part of their regime change operations in Libya and Syria.

On Thursday, a report by Middle East Eye (MEE) exposed what it described as an “open door” policy by the previous Conservative government of David Cameron, allowing members of the Libyan Islamic Fighting Group (LIFG) to travel to Libya in 2011 as part of military operations to overthrow Colonel Muammar Gaddafi. May was home secretary in that government. Abedi’s parents were both members of the LIFG. These individuals were able to travel freely between the UK, Libya, Syria and other locations.

Former rebel fighters interviewed by the MEE explained how British security services assisted their movements, providing them with passports and clearing them for departure. Belal Younis, who travelled to Libya in 2011, said he was asked by an MI5 officer, who had detained him for questioning after a trip to Libya in early 2011, “Are you willing to go into battle?”

“While I took time to find an answer,” Younis told MEE, “he turned and told me the British government have no problem with people fighting against Gaddafi.”

During a subsequent trip to Libya in May 2011, he was questioned by counter-terrorism police in a British airport lounge, but an MI5 officer interceded and he was “waved through.” The MI5 officer later called Younis to say that he had “sorted it out.”

Libya, once the wealthiest nation in Africa with free healthcare, the highest literacy and lowest poverty now lies in ruins and over-run with terrorists and warring gangs.

Many of those who travelled to Libya had previously been under counter-terrorism control orders, with tight restrictions on their movement and internet activity. However, the control orders were lifted in 2011 as Britain joined US and French efforts to topple Gaddafi.

Unknown to the British people, including the families who lost loved ones last Monday night, Manchester was at the centre of operations that funnelled rebel fighters into Libya. Younis told the MEE’s reporters, “The majority who went from here were from Manchester.” Another interviewee said of the young recruits he encountered during a visit to a rebel camp in Misrata that same year, “They had proper Manchester accents.”

Another British-born fighter told the MEE they were also allowed to travel to Syria, where Islamist groups, offshoots of Al-Qaeda and backed by the US and Britain, have been fighting to overthrow the government of Bashar Al-Assad. Abedi himself was allowed to travel to Syria. “No questions were asked,” Younis said. Another British-Libyan said he had worked for the British SAS in Benghazi to edit slick video recruitment and marketing packages, showing fighters being trained by both the SAS and Irish Special Forces.

In Saturday’s Daily Mail, Peter Oborne alleged direct collusion by MI6, Britain’s foreign intelligence service, with terrorist organisations in Libya and Syria. Oborne, associate editor of the Spectator and former chief political commentator at the Daily Telegraph, wrote, “MI6 officers were complicit in creating a generation of British-born jihadis who are prepared to do anything, and kill anyone—even young children—in their efforts to destroy this country.

“There is every reason to speculate that Salman Abedi’s evil handiwork at the Manchester Arena on Monday night was in part a direct consequence of MI6’s meddling in Middle Eastern and North African affairs.”

Oborne singled out MI6’s role under the Labour government of Tony Blair, when its former chiefs, Sir Richard Dearlove and Sir John Scarlett, “allowed [MI6] to become a propaganda tool for the Labour PM’s clique of war-mongers.”

“MI6 has failed to learn the lessons from this debacle,” Oborne wrote, pointing to the “hundreds” of British citizens who “were allowed to travel abroad to join jihadist organisations.”

Britain’s sordid dealings with the LIFG and other Al-Qaeda-linked groups stretch back to the 1990s. The LIFG was spawned from the mujahedeen and built up by the US in Afghanistan, as part of its destabilisation of the Soviet Union. Since then, the fate of the LIFG has directly tracked shifts in British and American foreign policy.

In 1996, British intelligence agencies paid LIFG leaders huge sums to attempt to assassinate Gaddafi, according to leaks from senior French intelligence officials and former MI5 officer David Shayler. In 2004, after the Blair government’s rapprochement with the Libyan regime, MI6 helped seize LIFG leader Abdel-Hakim Belhaj and his deputy Sami al-Saadi. According to British historian and author Mark Curtis, Belhaj was handed over to the CIA, tortured, and then sent back to Tripoli to spend six years in solitary confinement where MI6 agents reportedly questioned him.

In 2011, in response to the Arab Spring, the US and Britain set in motion long-standing plans for regime change operations in the Middle East. Anti-terrorism control orders against LIFG leaders were lifted because, according to Curtis, the British government “once again found that its interests—mainly concerning oil—coincided with those of Islamist forces in Libya.”

The 22 dead and scores injured in Manchester, no less than the people of Syria, Libya, Iraq, Afghanistan and countless other countries invaded and occupied, are the victims of British imperialist intrigue and are regarded as “collateral damage.”

These explosive revelations raise a number of questions that must be answered:

Last week Labour Party leader Jeremy Corbyn earned the enmity of the media for pointing to the obvious connection between Britain’s involvement in colonial-style wars and the heightened danger of terrorism. The Guardian led the attack, with Jonathan Freedland insisting, “It’s a delusion to think that the terror attacks are just about foreign policy,” and Paul Mason declaring, “The ‘blowback theory’, which blames Islamist terrorism directly on western expeditionary warfare, is both facile and irrelevant in this case.”

However, Corbyn was silent on the political responsibility of successive Labour and Tory governments for launching wars of aggression and even promised to give the army and the security services additional resources. He has so far said nothing about revelations that MI5 had forewarning of Abedi’s attack.

More to know – Assange, the Judge, GCHQ and MI5