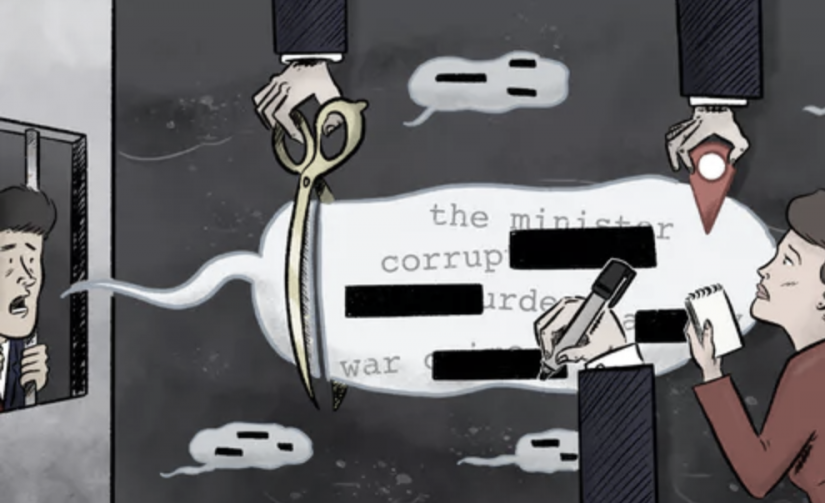 TruePublica Editor: It is not possible to say that Britain is not a surveillance state. It is. And much it is worse than any other country in the democratic West. Its press freedom ranking is very poor – languishing way down the list behind countries like South Africa, Lithuania, Ghana and Gabo Verde to name just a few. The scale of propaganda spewed out by the state-funded underhand influence networks like the Integrity Initiative, the Institute for Statecraft and Brigade 77 are only hints of the levers of control being applied to manipulate society and the scandalous information war being waged against its citizens. These chilling manipulations are straight out of the cold war playbook – only this time, you are the enemy.

From our media partner, The Bureau of Investigative Journalism comes the story that the state is very publicly demonstrating its support for media freedom, whilst in the background, it works its entire legal architecture at suppressing it. Ironically, the government is using the European Court of Human Rights, the very institution that hard-Brexiteers regularly cited as reasons for leaving the European Union, when it is the only institution defending the British media from the British state.

By Meirion Jones – TBIJ: Foreign Secretary Jeremy Hunt hosted a Global Conference for Media Freedom in London last week. Meanwhile, 400 miles away in Strasbourg UK government lawyers are fighting for the right to continue spying on the press.

The Bureau of Investigative Journalism today brings a case to the highest human rights court in Europe against the UK intelligence agencies’ mass snooping on press and public and the severe impingement on media freedom that this surveillance entails.

The case is being heard in the Grand Chamber of the European Court of Human Rights (ECHR) at the same time as Hunt hosted an event with 1,000 media and civil society representatives from across the world aimed at fighting for the protection of journalism and journalists’ sources.

As Hunt made his address in London, in Strasbourg the British government will defend its regime of mass surveillance of data — including journalistic communications — claiming it is a crucial part of the toolkit the intelligence services have to protect the public. Sir James Eadie, QC, who represents the government on legal issues of national importance will lead that defence.

The Bureau, alongside a number of human rights groups, brought its case against the mass surveillance programme after Edward Snowden, the former CIA operative and whistleblower, revealed how intelligence agencies, including GCHQ, were storing and monitoring a huge swathe of our data communications.

This surveillance can include most journalistic communications, including correspondence with sources and as such is an intrinsic intrusion on press freedoms. Without adequate protection from such snooping journalists are unable to communicate freely with their sources, or offer anonymity.

In a case brought to the ECHR, the Bureau argued that the government’s interception is unlawful because it fails to protect journalistic confidentiality as is required by the right of freedom of expression detailed in Article 10 of the European Convention of Human Rights.

Last year the court found in favour of the Bureau, ruling that the government’s surveillance programme was unlawful. In its ruling it stated that “freedom of expression constitutes one of the essential foundations of a democratic society and that the safeguards to be afforded to the press are of particular importance.” The ECHR also found that GCHQ’s data collection regime violated the human rights of the general population.

The court ruled that there were insufficient safeguards and oversight in place to properly protect privileged journalistic communications.

Under the present regime, there is no requirement for specific prior authorisation by a judge or independent assessor before collecting journalists’ communications. The Bureau believes there should be clear rules and accountability that govern the government’s use of any journalistic material. This is particularly important as the regime currently has a chilling effect on whistleblowers, a key source of important revelations which serve the public interest.

The case was referred to the Grand Chamber for further consideration.

Rachel Oldroyd, managing editor of the Bureau said: “This may be the most important case with regards to the protection of journalistic communications and the protection of our sources to be heard in the past 20 years. As journalists we must be able to speak freely to our sources without fear of surveillance. The UK government’s system of mass collection and storage of all our communications is a severe threat to this cornerstone of our profession and a severe intrusion upon the freedom of the press.

“It is ironic that on the very day the Bureau is making this case against the British government’s surveillance regime in the highest court in Europe, the same government is hosting a global summit on press freedom.”

The case has important implications not only for journalists working in the UK but for journalism across Europe for years to come. Ultimately this case is about ensuring there are adequate safeguards against the level of government snooping revealed by Snowden, and ensuring these are adequate in an era of technological development and mass surveillance.

Rosa Curling, a solicitor with the law firm Leigh Day, which is representing the Bureau said: “Journalistic privilege is a key aspect to press freedom. Fundamental to a functioning democratic society is the ability of journalists to communicate privately and freely with their sources. The government must not be allowed to snoop into these privileged communications. Our client hopes very much that the Grand Chamber will uphold and extend further the principles recognised by the European Court last year.”

The Bureau of Investigative Journalism is an independent, not-for-profit organisation that holds power to account