What links big tech, data, herd-immunity and COVID-19 to Brexit 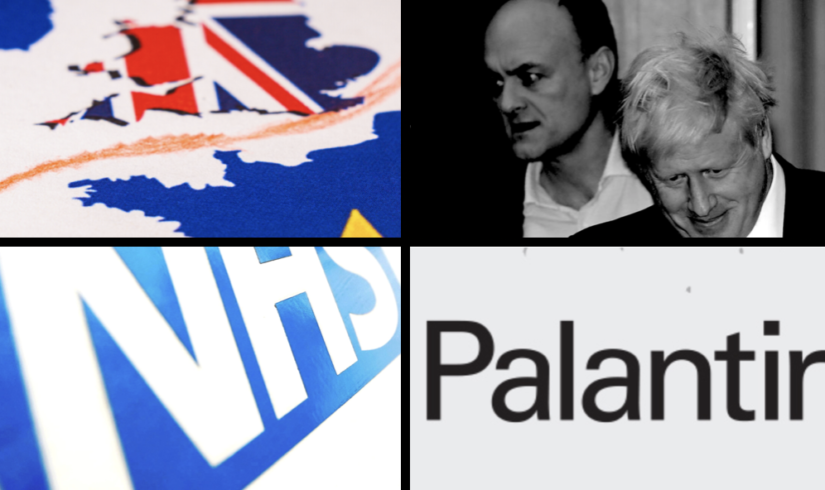 By TruePublica: What links big tech, big data, herd-immunity and the death-scape that is COVID-19 to Brexit? That has a really complicated answer and as you start to trawl through it, it just gets more complicated. However, here are the common links: Boris Johnson, Dominic Cummings (of course), Palantir and SAGE. There are other links of course as you’ll see.

Throughout the runup to the 2016 Brexit referendum, none of us knew that Dominic Cummings was at the centre of a huge con-trick that ended with the Brexit vote being dragged over the line using technologies that were designed to change ‘hearts and minds’ in war-torn conflict zones. A company called SCL and Cambridge Analytica became a household name for what turned out to be the hijacking of British democracy. Facebook was also very deeply involved – it is a company that is essentially now a portal to crime for criminals. Electoral laws were broken and to this day police investigations continue (supposedly).

What we witnessed was how a shadowy global operation involving (who knows how much??) dark money, big data and American billionaires influenced the result of the EU referendum.

Peter Theil, the rampantly right-wing billionaire co-founder of PayPal is also the founder of Palantir – a company involved in all of the above – and now Palantir is involved in something else (thanks to Dominic Cummings). The US big data firm is working with ‘Faculty’, a British artificial intelligence startup, to consolidate government databases over the COVID-19 virus supposedly to help ministers and officials respond to the pandemic.

At this point, it should be said that we have to be careful what we’re writing here – because lawsuits and legal warnings are being thrown about like confetti over this story.

The herd is still running

The Guardian writes that – “Data is being used by Faculty to build predictive computer models around the Covid-19 outbreak. One NHS document suggests that, two weeks ago, Faculty considered running a computer simulation to assess the impact of a policy of “targeted herd immunity.” If this is true, then what we are being told about how the government is handling the COVID-19 crisis is a lie – or so it appears – allegedly.

Leaving aside the technical reasons why a government would want to track this virus and the results it expects to get to combat it – The Guardian has seen documents that confirm these companies are operating for other reasons:

“However, the documents also appear to show the project includes large volumes of data pertaining to individuals, including protected health information, Covid-19 test results, the contents of people’s calls to the NHS health advice line 111 and clinical information about those in intensive care. While such data will be anonymised, it remains sensitive and confidential, and its use on a centralised new government database is likely to raise questions among privacy experts. A Whitehall source said they were alarmed at the “unprecedented” amounts of confidential health information being swept up in the project, which they said was progressing at alarming speed and with insufficient regard for privacy, ethics or data protection.”

It appears that information regarding name, address, postcode, gender, symptoms and cross-referencing it through – “a master patient index, an existing NHS resource that uses “social marketing data” to segment the British population into different “types” at household level.”

Faculty, the company involved in this project with Palantir is run by Marc Warner, whose brother, Ben, was reportedly recruited to Downing Street by Dominic Cummings after running the Conservative party’s private election model. In addition, according to The Guardian, Ben Warner is said to have worked closely with Dominic Cummings on the modelling programme used in the illegal Vote Leave campaign to leave the European Union.

It now turns out (allegedly) that Ben Warner sits alongside Dominic Cummings in the Scientific Advisory Group for Emergencies  (SAGE) meetings. The revelations in that story blew up a few days ago and already pertains to whether members of SAGE, who are supposed to be independent of political influence – are in fact, just that – politically influenced. And that is a huge question for all sorts of reasons.

There are two things that springs to mind here. The first is that Boris Johnson’s initial announcement that ‘herd-immunity’ was a thing and that we should ‘take it in the chin’ – appears to be exactly what the government has done irrespective of what they have said to the contrary. This explains why Britain’s performance in combatting the virus has been pitiful – ranking it amongst the worst in the world. The evidence speaks for itself. With less than 1 per cent of world population, Britain boasts 10 per cent of officially recorded deaths. It also shows that Dominic Cummings is still at the heart of all these shenanigans and that his extreme views, including that of eugenics, are being played out as it was Cummings who dismissed the science and nonchalantly declared in the fight against C19 that – “if a few pensioners die – so be it.”

Secondly, in addition to this (data hoovering) project and attached to it is, Microsoft, Google and Amazon – who are all involved one way or another, to a greater or lesser degree. What we do know is that combined, a powerful new apparatus has been built, no doubt, to sell to the industrial death machine that the American’s call ‘health care’ in a post-Brexit world. Johnson confirmed once again with Donald Trump only last week that a free trade deal will be done between the UK and USA. It will be a stealth project of course.

What COVID-19 has taught us is that the next pandemic is assured, that the health service needs to be prepared for it next time and that the key workers of our country were just that – key. What Boris Johnson has in mind, even after his rather ambiguous near-death experience, is that Britain’s health infrastructure, built up over generations, is to be privatised and asset-stripped to a rapacious profit-driven model (that costs the American taxpayer double what the NHS costs in the UK with worse outcomes).

The health industry in America is appalling. It bankrupts more people and households than all and any business activities combined. It sees over 26,000 people die each and every year simply because people couldn’t afford the insurance premiums – and that’s in the 25 to 64 age group. The American healthcare industry is in meltdown.  It is suing the Trump administration for publishing medical procedure costs and the FBI has a website dedicated to healthcare fraud because each year the industry is fined billions of dollars for its malfeasance and malpractice. And to add to its woes, medical data theft in America is by far the biggest in the world because the black market price for a single adult health file is worth $40-$50.

The reason why Palantir is sticking its blood funnel so deeply into the NHS is that there’s a bigger deal to be had here. Google and Amazon know this. America is looking for a new victim.

Big tech and big data is inextricably attached to Brexit, which is linked to Boris Johnson, Dominic Cummings and so on. COVID-19 is linked because aside of the deadly game of data analytics that increasingly drives more and more of our way of life as seen in the fight against the virus – it is hoovering up yet more data. The weak and strong are being identified. Insurance companies want to know what is profitable and what is a liability. This means that Britain’s healthcare system is going to be up for sale – but to achieve this you need to provide information for due diligence exercises. Due diligence is the investigation that a reasonable business or person is expected to take before entering into an agreement or contract to acquire an asset. No-one buys without knowing what they are buying.

And that is what this is all about, information gathering before due diligence requests.