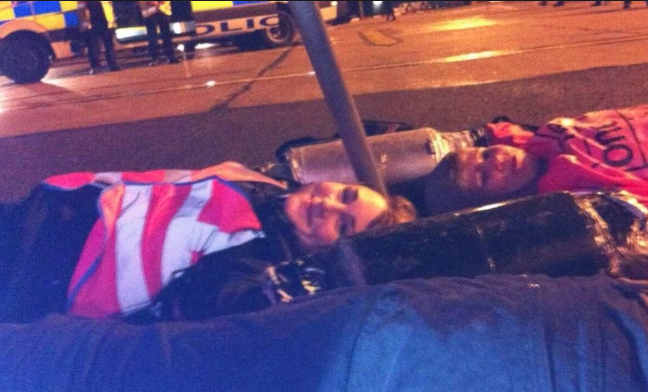 By TruePublica: Back in September, three environmental activists were the first people in Britain since 1932 to receive jail sentences for non-violent anti-fracking protest in the UK. An appeal was lodged and public outrage caused a new judge to declare that the original ruling was ‘excessive”. This excessive use of the law is being used again in another case, which has more serious consequences.

Just weeks after the anti-fracking protestors judicial disaster and the now famous ‘Stansted 15’ stand trial for their non-violent actions. (Read the case HERE).

In brief, the story goes like this; 15 activists entered Stansted Airport, accompanied by two journalists. After cutting a hole in the airport’s perimeter fence, they made their way toward a deportation plane and locked themselves to it so it couldn’t move without killing them. They remained there on the tarmac, for 10 hours until the next morning.

Court proceedings confirm that non-violence was the over-riding criteria for their actions – indeed, saving lives was what it was all about.

Their goal was really about shining a light on a brutal process. They were trying to prevent a greater crime from taking place, which is that of people being deported back to danger, violence and even back to death.

According to some reports, the airport runway was shut down for about an hour and 20 minutes, and some incoming flights were rerouted. Police officers arrived, but it took a while for them to cut everyone out.

It was Theresa May in 2012, two years into her job as Home Secretary when she made her strategy explicit, telling the Telegraph that her aim “was to create here in Britain a really hostile environment for illegal migration”. That led directly to the Windrush scandal that became a politically charged public relations nightmare for the government earlier this year.

The Guardian reported last April that Windrush – “underlines how much controlling immigration is not an electoral strategy but an ideological driver for the prime minister.”

Sarah Teather, a former Liberal Democrat MP who was minister for children and families, revealed in 2013 that an internal working group on immigration was initially named the ‘Hostile Environment Working Group’, with its name only changed following Lib Dem objections. This is more than just a hint as to the extent of government aggression.

Even after this huge scandal, the government continued its denial, blaming anomalies more than policy – “Home Office guidance says the rules are “a proportionate measure to maintain effective immigration control.”

The government even admitted that this strategy was in part about incentivising people to “self-deport” by making their lives unpleasant. But when they did not ‘self-deport’ the government went for them in different ways. So did the law.

Whilst most of us would accept that being deported will be an unpleasant experience, the sheer brutality of the government has been exposed in the case of the Stansted 15.

While some migrants and asylum-seekers are deported on commercial flights alongside passengers travelling for business or pleasure, others are deported via private flights chartered by the Home Office.

The Stansted 15 believed that at least three people scheduled to be on that particular charter flight, bound for Nigeria and Ghana, were at risk of serious harm or even death upon return to their countries of origin.

According to a report by Corporate Watch, a nonprofit research cooperative, some of these flights leave in the early hours before sunrise, sometimes from military bases instead of airports, and deportees, and security escorts are often the only people onboard.

Freedom of Information requests have revealed that the Home Office chartered 93 deportation flights from January 2016 through May 2018.

To make the charter flights viable there are raids in the weeks leading up to the actual flights. People are arrested at marketplaces, workplaces, their homes, and put in detention centres or immigration prisons. Then, in the middle of the night, they are herded on to these secret flights where there are no witnesses.

Some people are not notified of their impending deportation. Others were already appealing Home Office decisions. Some cases were reported to have not been properly processed or haven’t had their cases heard properly. The government is meant to provide those being deported on charter flights with notice of either 72 hours or five working days, depending on if the person is seeking a court injunction to defer their removal.

It turns out that more than one-third of appeals that go to court result in the Home Office’s initial decision being overturned.

This probably means that some are knowingly being arrested, imprisoned and deported before cases have gone through the correct process to determine the validity of a claim to remain in the UK.

In January 2018, the chief inspector of prisons, an independent inspector who reports on the treatment of those in prison, observed a deportation charter flight to France, Austria, and Bulgaria. His report highlights the use of “excessive” restraint on the passengers and describes the presence of 80 security escorts to accompany 23 deportees.

The Stansted 15 were originally charged with aggravated trespass – a charge they accepted. They have since additionally been charged with intentional disruption of services at an aerodrome. This charge falls under the “Endangering safety at aerodromes” section of the U.K.’s Aviation and Maritime Security Act 1990, a law that was originally intended to fight acts of terrorism.

The consequence is that an act of non-violence is now being interpreted by the law as so serious it comes with a potential lifetime prison sentence.

Amnesty International said that this charge may have been brought to discourage other activists from taking non-violent direct action in defence of human rights. “We’re concerned the authorities are using a sledgehammer to crack a nut.”

A charge intended as a counterterrorism measure is being used against nonviolent protesters has shocked many like it did with the 16-month sentence for the aforementioned non-violent anti-fracking protestors.

This is mission creep – an abuse of the law. By design, this law went on the statute book only for those with very violent intentions at airports in Britain.

Cecil Parkinson, the then secretary of state for transport, explained at the time back in the 1990s, “The protocol commits us to making it an offence under our law to carry out armed attacks at international airports and to cause damage or disruption at such airports.” He later says that the act is “to be an effective means of countering terrorism.”

John Prescott, then a member of Parliament, described the bill as an attempt to “make it more difficult for cowardly acts of terrorism to occur or for bombs to be planted on aircraft and planes — devices like those which have already killed hundreds of innocent passengers.”

There is no disputing what this law was designed for.

Like the anti-fracking protestors, this trial has led to both an outpouring of support for the defendants and outrage over the severity of their charges.

The Intercept reports that it has even gone to the stage of –  “bringing together people from anti-war, anti-racist, and climate justice movements. And despite what the city’s pro-Brexit vote may imply, the activists have also been met with solidarity in Chelmsford, where locals have housed them for the duration of the trial.”

“The bishop of Chelmsford appeared in the courtroom to show his support. Last spring, about 50 prominent writers and activists, including feminist activist Gloria Steinem and Intercept columnist Naomi Klein, published a letter calling for the charges to be dropped and for the government to stop chartering deportation flights.”

Whilst it is highly unlikely that the government would stop deportation flights, it is public outrage that will protect civil liberties in this case. You may or may not agree with the actions of the Stansted 15 but aligning their non-violent actions to that of bombing a plane with intentions to kill and maim is indefensible.

The British government has been caught up in constant lawbreaking in recent years. From illegal kidnapping, rendition and torture to rape and murder on the streets of Britain with its more recent admission regarding the activities of MI5. From illegal mass surveillance and breaches of privacy to unconstitutional spying on judges, lawyers, activists and civil rights organisations.

The rule of law demands that justice is separated from politics. With cases like the anti-fracking protestors and the Stansted 15, now it isn’t and that is the slippery slope towards a more authoritarian government. That trajectory has been vastly accelerated in recent years and it needs to stop before it’s too late.