Will Britain Be Handing Over Its Nuclear Deterrent As Part Of The Brexit Deal with the EU? 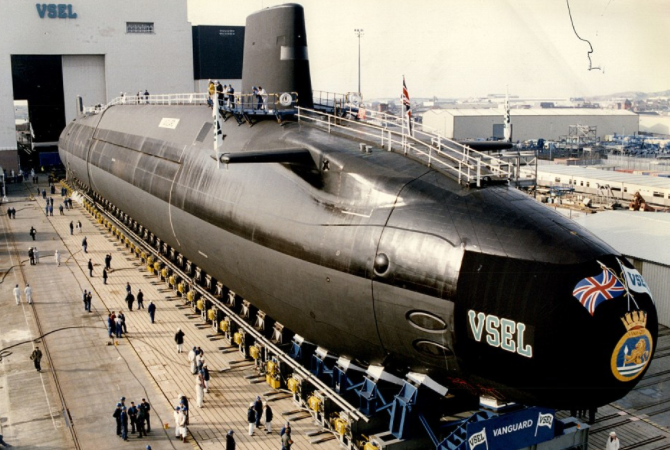 By Graham Vanbergen – From Strategic Culture Foundation comes a report that Britain could lose its independent nuclear deterrent with the possibility of even handing it over lock, stock and barrel to the EU. “With Donald Trump leading the United States, Europe seems to be losing trust in the American nuclear umbrella. As the EU focuses on the need to have its own military, the issue of European nuclear deterrent comes to the fore. The debate has been triggered. This issue is intensively discussed in Germany. The nuclear deterrence plan is eyeing France, proposing to turn the French nuclear potential into a European nuclear deterrent. It is believed that Germany could play a decisive role in convincing France, and may be the UK, to provide security guarantees for all of Europe. Under such a plan, Europe would become independent from the US.”

The story is written by a Colonel Andrei Akulov a retired, Moscow-based expert on international security issues. I’m not sure of the validity of this information or not, after all, he is Russian – and we all know what that means!

A second paper by Strategic Defence Initiatives, written up as an exclusive by UKColumn News seems to confirm this news. They quote Max Hofmann of Deutsche Welle, an award winning journalist and presenter on 20 January 2017 who saying “Everything must now be put on the table — from higher [EU] military spending to a British-French nuclear defense shield for the continent.“

The Strategic Defence Initiatives briefing paper says “The recent British referendum has made no difference to the speed and tenacity with which the Conservative Government under Prime Minister Theresa May and Secretary of State for Defence Sir Michael Fallon (a strong EU advocate and former EU Movement supporter) are continuing the path to EU military union. There has been no change in the advancing integration of UK military forces into the EU structure — the subject is simply not discussed in political, public and media forums, which is testimony to the usual EU policy of implementation by stealth where possible.”

Strategic Defence Initiatives goes further: “Perhaps most dangerous here is the rapid integration of the EU commercial military procurement and supply chain, operating under an EU treasury already being declared and implemented. Once locked together under EU procurement rules, and with ‘joint interoperability’ doctrine driving pan-EU military needs, Britain will be further stripped of its ability to design, build and supply our own weapons systems and munitions. This will further strengthen the EU political tactic of creating ‘interdependence’ between EU member states as a tool for removing sovereign identity and the ability to act as an independent nation state.”

The validity of this report is also under question as UK Column did not respond to an email requesting further information about the author from Strategic Defence Initiatives who seems to run an online shop from a farm and is elusive to say the least. Is this ‘fake news’?

However, Reuters News Agency has confirmed that Europe is thinking about developing its own nuclear deterrent strategy given concerns that U.S. President-elect Donald Trump could scale back U.S. military commitments in Europe.

Kieswetter continues “Europe must start planning for its own security in case the Americans sharply raise the cost of defending the continent, or if they decide to leave completely.”

Given that all these reports emerge post Brexit, are we looking at deeper European integration irrespective of ‘taking our country back’ which the British people voted for back last June.

It appears so. Kiesewetter said a Franco-British nuclear umbrella for Europe could be financed through a joint European military budget that is due to begin in 2019, along with joint European medical, transportation and reconnaissance commands.

Some three decades ago, London and Paris would have been more than flattered to be chosen as the defenders of the European continent. One would have thought that Britain’s decision to leave the EU would have blown that idea out of the water but it appears not.

Kiesewetter’s comment came before the announcement that EU Foreign and defence ministers approved a Brussels-based command centre for what looks like the beginnings of an EU army, which has great support in France, Italy and Germany.

“There are some indications that the EU Army’s formation has occurred far more rapidly than the public realises, and in some cases is actively concealed. In 2015 European People’s Party president Joseph Daul told journalists that “We are going to move towards an EU army much faster than people believe.”

The BBC have also confirmed in a recent report that part of the EU Commission’s president annual state of the union address was devoted to the UK’s unexpected vote to leave the EU and the formation of an EU military force.

We now know that not only were plans for an EU army well underway, the British government along with its EU counterparts took the decision to hide this information until after the Brexit referendum and even announced the power grab by the EU the following day to the bury the news.

This was confirmed by a Times news article entitled “EU army plans kept secret from voters” which reported that “to prevent the policy paper leaking and derailing David Cameron’s campaign to keep Britain in the EU, the plans will not be sent to national governments until the day after Britain votes (in the EU referendum).

The plans, drawn up by the EU’s foreign policy chief are supported by Germany and other countries as the first step towards an EU army that is already gaining pace. It is clear that the EU now dreams not just of its own army but its own nuclear deterrant, such as Trident.

In a newspaper interview, Jaroslaw Kaczynski, chairman of Poland’s ruling Law and Justice Party (PiS), has called for a European nuclear superpower.

One should not forget the rapidly changing geo-political chessboard either. Britain’s nuclear deterrent is the ageing Trident system.  It is designed, built and maintained by America so is the software that manages it. Britain simply leases it from them. The USA now considers Britain a pawn with waning influence in the EU Bloc of the remaining 27 nations. What choice does Britain have if the Americans demand that Britain provides this so-called ‘nuclear umbrella’ for Europe.

Fears that Russia has now surpassed the United States in nuclear ferocity and capability are not completely unfounded either. Business Insider reported a few months back that “on paper, newer, more complicated, more fearsome weapons comprise Russia’s nuclear arsenal.”

It may be in the end that Britain’s nuclear deterrent will be used in the Brexit negotiations to thrash out a better overall deal given that pressure could easily be applied by Washington. It may be that with a continually more assertive stance taken by Russia the move to consolidate Britain’s nuclear systems with France to provide a European wide defence umbrella is logical. Britain can barely afford to lease Trident, let alone buy its own system and who would sell it to Britain anyway?

Brexit, Trump, Russia and Europe has shifted the geo-political pieces on the chessboard to such an extent we really do not know what the final outcome will be both politically and economically. One thing you can sure of though is that Britain’s defence forces have been reduced to such an extent that it no longer has the resources to protect itself in the event of a major conflict. That being the case, it is unnerving to think that Britain’s nuclear deterrent is on the negotiating table right now.