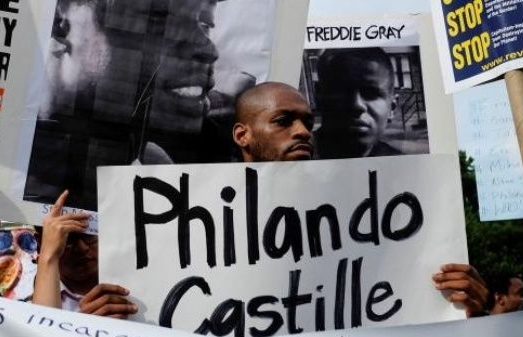 “It is often the case that police shootings, incidents where law enforcement officers pull the trigger on civilians, are left out of the conversation on gun violence. But a police officer shooting a civilian counts as gun violence. Every time an officer uses a gun against an innocent or an unarmed person contributes to the culture of gun violence in this country.”—Journalist Celisa Calacal

Legally owning a gun in America could get you killed by a government agent.

While it still technically remains legal to own a firearm in America, possessing one can now get you pulled over, searched, arrested, subjected to all manner of surveillance, treated as a suspect without ever having committed a crime, shot at and killed.

This same rule does not apply to government agents, however, who are armed to the hilt and rarely given more than a slap on the wrists for using their weapons to shoot and kill American citizens.

According to the Washington Post, “1 in 13 people killed by guns are killed by police.”

Just recently, for example, a Minnesota jury acquitted a police officer who shot and killed 32-year-old Philando Castile, a school cafeteria supervisor, during a routine traffic stop merely because Castile disclosed that he had a gun in his possession, for which he had a lawful conceal-and-carry permit. That’s all it took for police to shoot Castile four times as he was reaching for his license and registration. Castile’s girlfriend and her 4-year-old daughter witnessed the entire exchange.

Earlier this year, the Eleventh Circuit Court of Appeals ruled that Florida police will not be held accountable for banging on the wrong door at 1:30 am, failing to identify themselves as police, and then repeatedly shooting and killing the innocent homeowner who answered the door while holding a gun in self-defense.

Continuing its own disturbing trend of siding with police in cases of excessive use of force, a unanimous Supreme Court recently acquitted police who recklessly fired 15 times into a backyard shack in which a homeless couple—Angel and Jennifer Mendez—was sheltering. Incredibly, the Court ruled that the shooting was justified because Angel was allegedly seen holding a BB gun that he used for shooting rats.

What these cases add up to is a new paradigm in which legally owning a gun turns you into a target for government sharp-shooters.

Ironically, while America continues to debate who or what is responsible for gun violence—the guns, the gun owners, or our violent culture—little has been said about the greatest perpetrator of violence in American society: the U.S. government.

Violence has become the government’s calling card, starting at the top and trickling down, from the more than 80,000 SWAT team raids carried out every year on unsuspecting Americans by heavily armed, black-garbed commandos and the increasingly rapid militarization of local police forces across the country to the drone killings used to target insurgents.

You want to reduce gun violence? Start with the government.

The government’s arsenal of weapons makes the average American’s handgun look like a Tinker Toy. Under the auspices of a military “recycling” program, which allows local police agencies to acquire military-grade weaponry and equipment, more than $4.2 billion worth of equipment has been transferred from the Defense Department to domestic police agencies since 1990.

This lopsided, top-heavy, authoritarian state of affairs is not the balance of power the founders intended for “we the people.”

The Second Amendment, in conjunction with the multitude of prohibitions on government overreach enshrined in the Bill of Rights, was supposed to serve as a clear shackle on the government’s powers.

To founders such as Thomas Jefferson, who viewed the government as a powerful entity that must be bound “down from mischief by the chains of the Constitution,” the right to bear arms was no different from any other right enshrined in the Constitution: it was intended to stand as a bulwark against a police state.

As I explain in my book Battlefield America: The War on the American People, without any one of those freedoms, we are that much more vulnerable to the vagaries of out-of-control policemen, benevolent dictators, genuflecting politicians, and overly ambitious bureaucrats.

This is exactly what those who drafted the U.S. Constitution feared: that laws and law enforcers would be used as tools by a despotic government to wage war against the citizenry.

Now don’t get me wrong.

I do not believe that violence should ever be the answer to our problems. Still there’s something to be said for George Orwell’s view that “that rifle hanging on the wall of the working-class flat or labourer’s cottage is the symbol of democracy. It is our job to see that it stays there.”

The Second Amendment serves as a check on the political power of the ruling authorities. It represents an implicit warning against governmental encroachments on one’s freedoms, the warning shot over the bow to discourage any unlawful violations of our persons or property.

Certainly, dictators in past regimes have understood this principle only too well.

As Adolf Hitler noted, “The most foolish mistake we could possibly make would be to allow the subject races to possess arms. History shows that all conquerors who have allowed their subject races to carry arms have prepared their own downfall by so doing.”

It should come as no surprise, then, that starting in December 1935, Jews in Germany were prevented from obtaining shooting licenses, because authorities believed that to allow them to do so would “endanger the German population.”

In late 1938, special orders were delivered barring Jews from owning firearms, with the punishment for arms possession being 20 years in a concentration camp.

The rest, as they say, is history. Yet it is a history that we should be wary of repeating.