Note from America: Christmas has become yet another trigger word 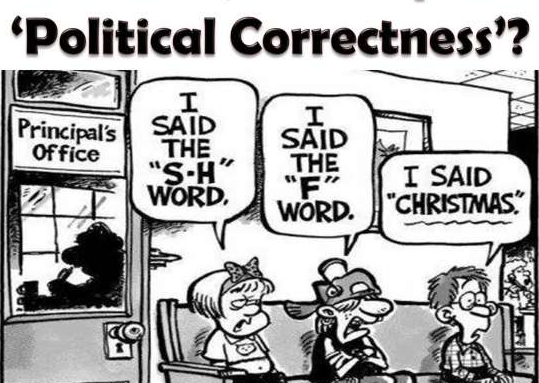 By John W. Whitehead – constitutional attorney, Charlottesville, Virginia: To a nation of snowflakes, Christmas has become yet another trigger word. The latest Christmas casualties in the campaign to create one large national safe space are none other than the beloved animated classic Rudolph the Red-Nosed Reindeer (denounced for promoting bullying and homophobia) which first aired on television on December 6, 1964, and the Oscar-winning tune “Baby, It’s Cold Outside” (accused of being a date rape anthem) crooned by everyone from Dean Martin to Will Ferrell and Zooey Deschanel in the movie Elf.

Also on the endangered species Christmas list are such songs as “Deck the Halls” (it supposedly promotes “gay” apparel), “Santa Baby” (it has been denounced for “slut shaming”), and “White Christmas” (perceived as being racist).

One publishing company even re-issued their own redacted version of Clement Clarke Moore’s famous poem “Twas the night before Christmas” in order to be more health conscious: the company edited out Moore’s mention of Santa smoking a pipe (“The stump of a pipe he held tight in his teeth, / And the smoke, it encircled his head like a wreath.”)

After a year plagued with its fair share of Scrooges and Grinches and endless months of being mired in political gloom and doom, we could all use a little Christmas cheer right now.

Unfortunately, the politically charged Right and Left have been trying to score points off each other for so long, using whatever means available, that even Christmas has been weaponized.

Yet just because the War on Christmas has been adopted as a war cry by Donald Trump doesn’t mean that it’s not real.

Indeed, in its “Constitutional Q&A: Twelve Rules of Christmas,” The Rutherford Institute points out that some communities, government agencies and businesses have gone to great lengths to avoid causing offense over Christmas.

In many of the nation’s schools, Christmas carols, Christmas trees, wreaths and candy canes have been banned as part of the effort to avoid any reference to Christmas, Christ or God. One school even outlawed the colours red and green, saying they were Christmas colours and, thus, illegal.

A New Jersey middle school cancelled a field trip to attend a performance of a play based on Charles Dickens’s “A Christmas Carol” because some might have found it “offensive.”

In Texas, a teacher who decorated her door with a scene from “A Charlie Brown Christmas,” including a scrawny tree and Linus, was forced to take it down lest students be offended or feel uncomfortable.

In Virginia, a high school principal debated about whether he could mention Santa or distribute candy canes given that they were symbols of Christmas.

In Massachusetts, a fourth-grade class was asked to list 25 things that reminded them of Christmas. When one young student asked if she could include “Jesus,” her teacher replied that she could get fired if Christmas’ namesake appeared on the list.

Things are not much better outside the schools.

While the First Amendment Establishment Clause prohibits the government from forcing religion on people or endorsing one particular religion over another, there is no legitimate legal reason why people should not be able to celebrate the season freely or wish each other a Merry Christmas or even mention the word Christmas.

The Rutherford Institute’s “Twelve Rules of Christmas” guidelines are helpful in dealing with folks who subscribe to the misguided notion that the law requires anything Christmas in nature be banned from public places.

Yet here’s the thing about this so-called War on Christmas that people don’t seem to get: while Christmas may be the “trigger” for purging Christmas from public places, government forums and speech—except when it profits Corporate America—it is part and parcel of the greater trend in recent years to whittle away at free speech and trample the First Amendment underfoot.

We are witnessing the emergence of an unstated yet court-sanctioned right, one that makes no appearance in the Constitution and yet seems to trump the First Amendment at every turn: the right to not be offended.

This is censorship, driven by a politically correct need to pander to those who are easily offended.

Mind you, the government doesn’t care about Christmas. It cares about control. By government, I’m talking about the entrenched government bureaucracy that really calls the shots no matter what political party controls Congress and the White House.

The police state wants us to be a nation of snowflakes, snitches and book burners: a legalistic, intolerant, elitist, squealing bystander nation willing to turn on each other and turn each other in for the slightest offence.

This plays perfectly into the Deep State’s efforts to keep the citizenry at odds with each other and incapable of presenting a united front against the threats posed by the government and its cabal of Constitution-destroying agencies and corporate partners.

You want to know why this country is in the state it’s in?

As I make clear in my book Battlefield America: The War on the American People, the answer is the same no matter what the problem might be, whether it’s the economy, government corruption, police brutality, endless wars, censorship, falling literacy rates, etc.: every one of these problems can be sourced back to the fact that “we the people” have stopped thinking for ourselves and relinquished responsibility for our lives and well-being to a government entity that sees us only as useful idiots.

We are creating a schizophrenic world for our children to grow up in, and it is neither healthy nor will it produce the kind of people who will be able to face the challenges of a future ruled by a totalitarian regime.

You can’t sanitize reality. You can’t scrub out of existence every unpleasant thought or idea. You can’t legislate tolerance. You can’t create enough safe spaces to avoid the ugliness that lurks in the hearts of men and women. You can’t fight ignorance with the weapons of a police state.

What you can do, however, is step up your game.

Opt for kindness over curtness, and civility over censorship. Choose peace over politics, and freedom over fascism. Find common ground with those whose politics or opinions or lifestyles may not jive with your own.

Do your part to make the world a little brighter and a little lighter, and maybe, just maybe, we’ll have a chance of digging our way out of this hole.