Note From America: Gov’t Shutdown or Not, the Police State Will Continue to Flourish 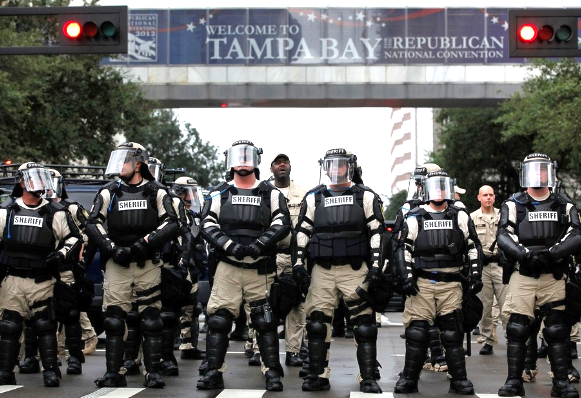 By Constitutional Attorney – John W Whitehead, Charlottesville, Virginia: The government has shut down again. At least, parts of the government have temporarily shut down over President Trump’s demand for a $5 billion border wall. Yet while these political games dominate news headlines, send the stock market into a nosedive, and put more than 800,000 federal employees at risk of having to work without pay, nothing about this government shutdown will diminish the immediate and very real dangers of the American Police State.

Indeed, take a look at the programs and policies that are not affected by a government shutdown, and you’ll get a clearer sense of the government’s priorities, which have little to do with serving taxpayers and everything to do with amassing money, power and control.

Not even NORAD, the North American Aerospace Defense Command that tracks Santa Claus’ route across the globe, will have its surveillance efforts curtailed one iota.

Surveillance will continue unabated. On any given day, whether you’re walking through a store, driving your car, checking email, or talking to friends and family on the phone, you can be sure that some government agency, whether the NSA or some other entity, is listening in and tracking your behaviour.

Government spying will continue unabated. Government shutdown or not, the National Security Agency (NSA), with its $10.8 billion black ops annual budget, will continue to spy on every person in the United States who uses a computer or phone.

Egregious searches will continue unabated. Under the pretext of protecting the nation’s infrastructure (roads, mass transit systems, water and power supplies, telecommunications systems and so on) against criminal or terrorist attacks, Transportation Security Administration (TSA) task forces (comprised of federal air marshals, surface transportation security inspectors, transportation security officers, behaviour detection officers and explosive detection canine teams) will continue to do random security sweeps of nexuses of transportation, including ports, railway and bus stations, airports, ferries and subways. Sweep tactics include the use of x-ray technology, pat-downs and drug-sniffing dogs, among other things.

The undermining of the Constitution will continue unabated. America’s so-called war on terror, which it has relentlessly pursued since 9/11, has chipped away at our freedoms, unravelled our Constitution and transformed our nation into a battlefield, thanks in large part to such subversive legislation as the USA Patriot Act and National Defense Authorization Act. These laws—which completely circumvent the rule of law and the constitutional rights of American citizens, re-orienting our legal landscape in such a way as to ensure that martial law, rather than the rule of law, our U.S. Constitution, becomes the map by which we navigate life in the United States—will continue to be enforced.

Militarized policing will continue unabated. Thanks to federal grant programs allowing the Pentagon to transfer surplus military supplies and weapons to local law enforcement agencies without charge, police forces will continue to be transformed from peace officers into heavily armed extensions of the military, complete with jackboots, helmets, shields, batons, pepper-spray, stun guns, assault rifles, body armor, miniature tanks and weaponized drones. Having been given the green light to probe, poke, pinch, taser, search, seize, strip and generally manhandle anyone they see fit in almost any circumstance, all with the general blessing of the courts, America’s law enforcement officials will continue to keep the masses corralled, under control, and treated like suspects and enemies rather than citizens.

SWAT team raids will continue unabated. With more than 80,000 SWAT team raids carried out every year on unsuspecting Americans for relatively routine police matters, nationwide, SWAT teams will continue to be employed to address an astonishingly trivial array of criminal activity or mere community nuisances.

Overcriminalization will continue unabated. The government bureaucracy will continue to churn out laws, statutes, codes and regulations that reinforce its powers and value systems and those of the police state and its corporate allies, rendering the rest of us petty criminals. The average American now unknowingly commits three felonies a day, thanks to this overabundance of vague laws that render otherwise innocent activity illegal.

The shadow government— a.k.a. the Deep State, a.k.a. the police state, a.k.a. the military industrial complex, a.k.a. the surveillance state complex—will continue unabated. This corporatized, militarized, entrenched bureaucracy that is fully operational and staffed by unelected officials will continue to call the shots in Washington DC, no matter who sits in the White House or controls Congress.

These issues are not going away.

They are the backbone of an increasingly aggressive authoritarian government, formed by an unholy alliance between the mega-corporations with little concern for the Constitution and elected officials and bureaucrats incapable or unwilling to represent the best interests of their constituents.

When it comes right down to it, no matter how long a government shutdown lasts, it will remain business as usual in terms of the government’s unceasing pursuit of greater powers and control.

So where do we go from here?

If public opposition, outright challenges, and a government shutdown don’t stop or even slow down the police state, what’s to be done?

Do what you must to survive. Go to work, take care of your family, pay off your debts. All the while you’re doing those things which allow you to survive from one day to the next, plan for the future and strive for freedom.

Pay attention to the political structure that is being created in the shadows, the economic system that is chaining us down with debt, and the feudal, fascist society borne out of the marriage of government and big business.

Avoid the propaganda mills posing as news sources. Express your outrage, loudly and tirelessly, to the government’s incursions on our freedoms.

Act locally—taking issue with any and every encroachment on your rights, no matter how minor, whether it’s a ban on goat cheese or installations of red light cameras at intersections and on school buses—because reclaiming our rights from the ground up, starting locally and trickling up, remains our only hope.

Resistance may seem futile, it will be hard, and as I make clear in my book Battlefield America: The War on the American People, there will inevitably be a price to pay for resisting the emerging tyranny, but to the extent that you are able, RESIST.