Note from America: Living at the mercy of a militarised, weaponised, immunised police state 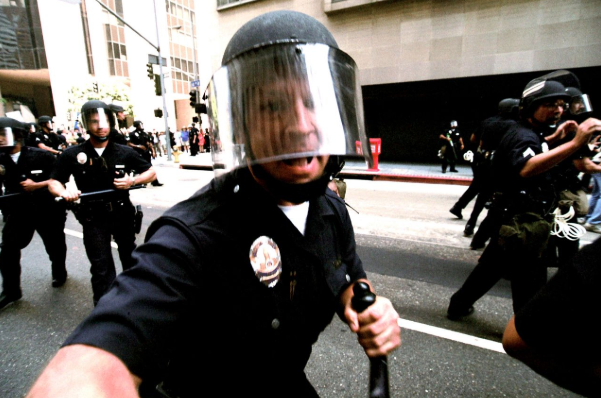 TruePublica Editor: The following Note from America is a reminder of what could happen in Britain. The ideals that should embody a once great nation are falling away. Its acts of moral courage are now in serious decline and hard fought for rights of liberty and justice are in rapid decay. These foundations are being replaced with oppression, corruption and cruelty. Britain is the most surveilled country in the democratic west, its press freedom is in serious decline, non-violent protests is now being matched with prison sentences and sweeping powers are being given to police. In a less regulated post-Brexit Britain, we should all be wary now that Police chiefs have been preparing plans to quell any disorder after next April in anticipation of public dissent. It could, by default, in the years to come, turn into the disaster that American civil society is experiencing right now.

By John W Whitehead- Constitutional Attorney, Charlottesville, Virginia: What the architects of the police state want are submissive, compliant, cooperative, obedient, meek citizens who don’t talk back, don’t challenge government authority, don’t speak out against government misconduct and don’t step out of line.

What the First Amendment protects—and a healthy constitutional republic requires—are citizens who routinely exercise their right to speak truth to power.

It’s not an easy undertaking.

Weaponized by police, prosecutors, courts and legislatures, “disorderly conduct” charges have become a convenient means by which to punish those individuals who refuse to be muzzled.

Cases like these have become all too common, typical of the bipolar nature of life in the American police state today: you may have distinct, protected rights on paper, but dare to exercise those rights and you put yourself at risk for fines, arrests, injuries and even death.

This is the unfortunate price of freedom. Yet these are not new developments. We have been circling this particular drain hole for some time now.

Almost 50 years ago, Lewis Colten was arrested outside Lexington, Kentucky, for questioning police and offering advice to his friend during a traffic stop.

Colten subsequently challenged his arrest as a violation of his First Amendment right to free speech and took the case all the way to the U.S. Supreme Court, which sided with the police.

Although the Court acknowledged that Colten was not trespassing or disobeying any traffic regulation himself, the majority affirmed that Colten “had no constitutional right to observe the issuance of a traffic ticket or to engage the issuing officer in conversation at that time.”

The Supreme Court’s bottom line: protecting police from inconvenience, annoyance or alarm is more important than protecting speech that, in the government’s estimation, has “no social value.”

While the ruling itself was unsurprising for a judiciary that tends to march in lockstep with the police, the dissent by Justice William O. Douglas is a powerful reminder that the government exists to serve the people and not the other way around.

Stressing that Colten’s speech was quiet, not boisterous, devoid of “fighting words,” and involved no overt acts, fisticuffs, or disorderly conduct in the normal meaning of the words, Douglas took issue with the idea that merely by speaking to a government representative, in this case, the police—a right enshrined in the First Amendment, by the way—Colten was perceived as inconveniencing and annoying the police.

In a passionate defence of free speech, Douglas declared:

Since when have we Americans been expected to bow submissively to authority and speak with awe and reverence to those who represent us? The constitutional theory is that we the people are the sovereigns, the state and federal officials only our agents. We who have the final word can speak softly or angrily. We can seek to challenge and annoy, as we need not stay docile and quiet. The situation might have indicated that Colten’s techniques were ill-suited to the mission he was on, that diplomacy would have been more effective. But at the constitutional level speech need not be a sedative; it can be disruptive.

It’s a power-packed paragraph full of important truths that the powers-that-be would prefer we quickly forget: We the people are the sovereigns. We have the final word. We can speak softly or angrily. We can seek to challenge and annoy. We need not stay docile and quiet. Our speech can be disruptive. It can invite dispute. It can be provocative and challenging. We do not have to bow submissively to authority or speak with reverence to government officials.

Now in theory, “we the people” have a constitutional right to talk back to the government.

In fact, the U.S. Supreme Court concluded as much in City of Houston v. Hill when it struck down a city ordinance prohibiting verbal abuse of police officers as unconstitutionally overbroad and a criminalization of protected speech.

In practice, however, talking back—especially when the police are involved—can get you killed. The danger is real.

We live in an age in which “we the people” are at the mercy of militarized, weaponized, immunized cops who have almost absolute discretion to decide who is a threat, what constitutes resistance, and how harshly they can deal with the citizens they were appointed to “serve and protect.”

While violent crime in America remains at an all-time low, the death toll as a result of police-sponsored violence continues to rise. In fact, more than 1,000 people are killed every year by police in America, more than any other country in the world.

What we are dealing with is a nationwide epidemic of court-sanctioned police violence carried out against individuals posing little or no real threat.

Police encounters have deteriorated so far that anything short of compliance—including behaviour the police perceive as disrespectful or “insufficiently deferential to their authority,” “threatening” or resistant—could get you arrested, jailed or killed.

The problem, of course, is that compliance is rarely enough to guarantee one’s safety.

When police officers are allowed to operate under the assumption that their word is law and that there is no room for any form of disagreement or even question, that serves to destroy the First Amendment’s assurances of free speech, free assembly and the right to petition the government for a redress of grievances.

As I make clear in my book Battlefield America: The War on the American People, if ever there were a time to scale back on the mindset adopted by cops that they are the law and should be revered, feared and obeyed, it is now.