Note from America: No One Is Spared From This Nightmare 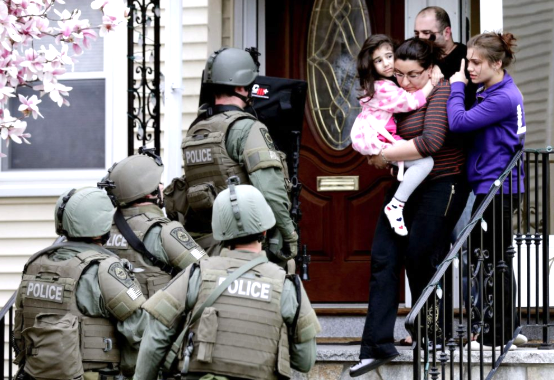 By John W Whitehead – Constitutional attorney, Charlottesville, Virginia: For too long now, the American people have allowed their personal prejudices and politics to cloud their judgment and render them incapable of seeing that the treatment being doled out by the government’s lethal enforcers has remained consistent, no matter the threat.

Take Roger Stone, one of President Trump’s longtime supporters, for example. This is a guy accused of witness tampering, obstruction of justice and lying to Congress.

As far as we know, this guy is not the kingpin of a violent mob or drug-laundering scheme. He’s been charged with a political crime. So what does the FBI do? They send 29 heavily armed agents in 17 vehicles to carry out a SWAT-style raid on Stone’s Florida home just before dawn on Jan. 25, 2019. They pound on his door, point automatic weapons at him, and terrorize his wife and his dogs.

Overkill? Sure. Yet another example of government overreach and brutality? Definitely.

But here’s the thing: while Tucker Carlson and Chris Christie and other Trump apologists appear shocked that law enforcement personnel would stage a military assault against “an unarmed 66-year-old man who has been charged with a nonviolent crime,” this is nothing new.

Indeed, this is blowback, one more vivid example of how the government’s short-sighted use of immoral, illegal and unconstitutional tactics become dangerous weapons turned against the American people.

To be clear, this is far from the first time a SWAT team has been employed in non-violent scenarios.

SWAT teams have been employed to address an astonishingly trivial array of so-called criminal activity or mere community nuisances: angry dogs, domestic disputes, improper paperwork filed by an orchid farmer, and misdemeanour marijuana possession, to give a brief sampling. In some instances, SWAT teams are even employed, in full armament, to perform routine patrols.

As the role of paramilitary forces has expanded to include involvement in nondescript police work targeting nonviolent suspects, the mere presence of SWAT units has actually injected a level of danger and violence into police-citizen interactions that was not present as long as these interactions were handled by traditional civilian officers.

There are few communities without a SWAT team today.

Where this becomes a problem of life and death for Americans is when these militarized SWAT teams are assigned to carry out routine law enforcement tasks.

No longer reserved exclusively for deadly situations, SWAT teams are now increasingly being deployed for relatively routine police matters such as serving a search warrant, with some SWAT teams being sent out as much as five times a day.

Police in both Baltimore and Dallas have used SWAT teams to bust up poker games. In Arizona, a SWAT team was used to break up an alleged cockfighting ring. An Atlanta SWAT team raided a music studio, allegedly out of a concern that it might have been involved in illegal music piracy.

A Minnesota SWAT team raided the wrong house in the middle of the night, handcuffed the three young children, held the mother on the floor at gunpoint, shot the family dog, and then “forced the handcuffed children to sit next to the carcass of their dead and bloody pet for more than an hour” while they searched the home.

These incidents are just the tip of the iceberg.

This is what happens when paramilitary forces are used to conduct ordinary policing operations, such as executing warrants on nonviolent defendants.

In some cases, officers misread the address on the warrant. In others, they simply barge into the wrong house or even the wrong building.

In another subset of cases (such as the Department of Education raid on Anthony Wright’s home), police conduct a search of a building where the suspect no longer resides.

SWAT teams have even on occasion conducted multiple, sequential raids on wrong addresses or executed search warrants despite the fact that the suspect is already in police custody. Police have also raided homes on the basis of mistaking the presence or scent of legal substances for drugs. Incredibly, these substances have included tomatoes, sunflowers, fish, elderberry bushes, kenaf plants, hibiscus, and ragweed.

Unfortunately, the shock-and-awe tactics utilized by many SWAT teams only increases the likelihood that someone will get hurt.

Aiyana Jones is dead because of a SWAT raid gone awry. The 7-year-old was killed after a Detroit SWAT team—searching for a suspect—launched a flash-bang grenade into her family’s apartment, broke through the door and opened fire, hitting the little girl who was asleep on the living room couch. The cops weren’t even in the right apartment.

The problems inherent in these situations are further compounded by the fact that SWAT teams are granted “no-knock” warrants at high rates such that the warrants themselves are rendered practically meaningless.

This sorry state of affairs is made even worse by U.S. Supreme Court rulings that have essentially done away with the need for a “no-knock” warrant altogether, giving the police authority to disregard the protections afforded American citizens by the Fourth Amendment.

In the process, Americans are rendered altogether helpless and terror-stricken as a result of these confrontations with the police.

Indeed, “terrorizing” is a mild term to describe the effect on those who survive such vigilante tactics. Yet this type of “terrorizing” activity is characteristic of the culture that we have created.

Indeed, as I document in my book Battlefield America: The War on the American People, it is increasingly evident that militarized police armed with weapons of war who are empowered to carry out pre-dawn raids on our homes, shoot our pets, and terrorize our families have not made America any safer or freer.