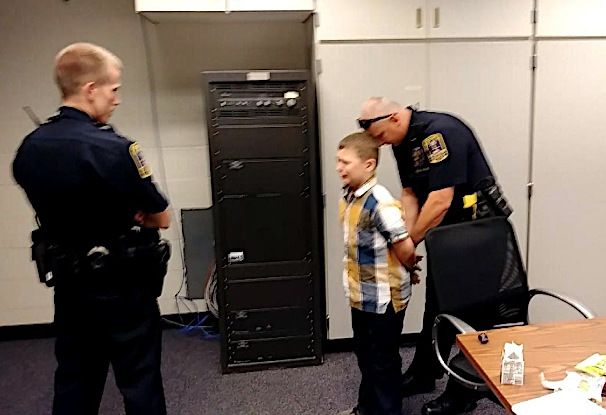 By constitutional attorney John W Whitehead – Charlottesville, Virginia: It used to be that if you talked back to a teacher or played a prank on a classmate, or just failed to do your homework, you might find yourself in detention or doing an extra writing assignment after school.

Of course, that was before school shootings became a part of our national lexicon.

Nowadays, as a result of the government’s profit-driven campaign to keep the nation “safe” from drugs, weapons and terrorism, students are not only punished for minor transgressions such as playing cops and robbers on the playground, bringing LEGOs to school, or having a food fight, but they are being punished with suspension, expulsion, and even arrest.

Welcome to Compliance 101: the police state’s primer in how to churn out compliant citizens and transform the nation’s school’s into quasi-prisons through the use of surveillance cameras, metal detectors, police patrols, zero tolerance policies, lock downs, drug sniffing dogs, strip searches and active shooter drills.

If you were wondering, these police state tactics have not made the schools any safer.

Rather, they’ve turned the schools into authoritarian microcosms of the police state, containing almost every aspect of the militarized, intolerant, senseless, over criminalised, legalistic, surveillance-riddled, totalitarian landscape that plagues those of us on the “outside.”

From the moment a child enters one of the nation’s 98,000 public schools to the moment he or she graduates, they will be exposed to a steady diet of draconian zero-tolerance policies that criminalize childish behaviour, overreaching anti-bullying statutes that criminalize speech, school resource officers (police) tasked with disciplining and/or arresting so-called “disorderly” students, standardized testing that emphasizes rote answers over critical thinking, politically correct mindsets that teach young people to censor themselves and those around them, and extensive biometric and surveillance systems that, coupled with the rest, acclimate young people to a world in which they have no freedom of thought, speech or movement.

Zero tolerance policies that were intended to make schools safer by discouraging the use of actual drugs and weapons by students have turned students into suspects to be treated as criminals by school officials and law enforcement alike, while criminalizing childish behaviour.

For instance, 9-year-old Patrick Timoney was sent to the principal’s office and threatened with suspension after school officials discovered that one of his LEGOs was holding a 2-inch toy gun.

David Morales, an 8-year-old Rhode Island student, ran afoul of his school’s zero-tolerance policies after he wore a hat to school decorated with an American flag and tiny plastic Army figures in honour of American troops. School officials declared the hat out of bounds because the toy soldiers were carrying miniature guns.

Things have gotten so bad that it doesn’t even take a toy gun to raise the ire of school officials.

A 12-year-old New York student was hauled out of school in handcuffs for doodling on her desk with an erasable marker.

Even imaginary weapons (hand-drawn pictures of guns, pencils twirled in a “threatening” manner, imaginary bows and arrows, even fingers positioned like guns) can also land a student in detention.

Acts of kindness, concern, basic manners or just engaging in childish behaviour can also result in suspensions. One 13-year-old was given detention for exposing the school to “liability” by sharing his lunch with a hungry friend.

In South Carolina, where it’s against the law to disturb a school, more than a thousand students a year—some as young as 7 years old—“face criminal charges for not following directions, loitering, cursing, or the vague allegation of acting ‘obnoxiously.’ If charged as adults, they can be held in jail for up to 90 days.”

Things get even worse when you add police to the mix.

Thanks to a combination of media hype, political pandering and financial incentives, the use of armed police officers (a.k.a. school resource officers) to patrol school hallways has risen dramatically in the years since the Columbine school shooting (nearly 20,000 by 2003).

Funded by the U.S. Department of Justice, these school resource officers (SROs) have become de facto wardens in the elementary, middle and high schools, doling out their own brand of justice to the so-called “criminals” in their midst with the help of tasers, pepper spray, batons and brute force.

This is the end product of all those so-called school “safety” policies, which run the gamut from zero tolerance policies that punish all infractions harshly to surveillance cameras, metal detectors, random searches, drug-sniffing dogs, school-wide lockdowns, active-shooter drills and militarized police officers.

Advocates for such harsh police tactics and weaponry like to trot out the line that school safety should be our first priority lest we find ourselves with another Sandy Hook.

What they will not tell you is that such shootings are rare.

In their zeal to crack down on guns and lock down the schools, these cheerleaders for police state tactics in the schools might also fail to mention the lucrative, multi-million dollar deals being cut with military contractors such as Taser International to equip these school cops with tasers, tanks, rifles and $100,000 shooting detection systems.

As if it weren’t bad enough that the nation’s schools have come to resemble prisons, the government is also contracting with private prisons to lock up our young people for behaviour that once would have merited a stern lecture. Nearly 40 per cent of those young people who are arrested will serve time in a private prison, where the emphasis is on making profits for large megacorporations above all else.

This profit-driven system of incarceration has also given rise to a growth in juvenile prisons and financial incentives for jailing young people.

So what’s the answer, not only for the here-and-now—the children growing up in these quasi-prisons—but for the future of this country?

Clearly, the pathology that characterizes the American police state has passed down to the schools.

What can be done?

As we’ve seen with other issues, any significant reforms will have to start locally and trickle upwards.

As I point out in my book Battlefield America: The War on the American People, with every school police raid and overzealous punishment that is carried out in the name of school safety, the lesson being imparted is that Americans—especially young people—have no rights at all against the state or the police.

If we do not rein in the police state’s influence in the schools, the future to which we are sending our children will be characterized by a brutal, totalitarian regime.