Twilight of the Courts: The Elusive Search for Justice in the American Police State 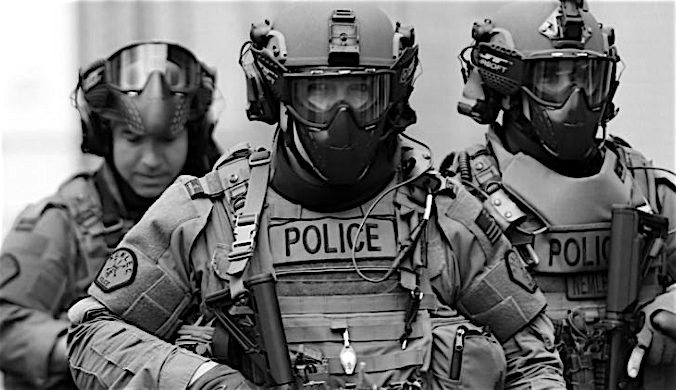 “As nightfall does not come at once, neither does oppression. In both instances, there is a twilight when everything remains seemingly unchanged. And it is in such twilight that we all must be most aware of change in the air – however slight – lest we become unwitting victims of the darkness.”—Supreme Court Justice William O. Douglas

We have entered a new regime and it’s called the American police state.

As the U.S. Supreme Court’s ruling in County of Los Angeles vs. Mendez makes clear, Americans can no longer rely on the courts to mete out justice.

Continuing its disturbing trend of siding with police in cases of excessive use of force, a unanimous Court declared that police should not be held liable for recklessly firing 15 times into a shack where a homeless couple—Angel and Jennifer Mendez—was sleeping.

Understandably, the Mendezes were startled by the intruders, so much so that Angel was holding his BB gun, which he used to shoot rats, in defense. Despite the fact that police barged into the Mendez’s backyard shack without a search warrant and without announcing their presence and fired 15 shots at the couple, who suffered significant injuries (Angel Mendez suffered numerous gunshot wounds, one of which required the amputation of his right leg below the knee, and his wife Jennifer was shot in the back), the Court once again gave the police a “get out of jail free” card.

Unfortunately, we’ve been traveling this dangerous road for a long time now.

In the police state being erected around us, the police and other government agents can probe, poke, pinch, taser, search, seize, strip and generally manhandle anyone they see fit in almost any circumstance, all with the general blessing of the courts.

Whether it’s police officers breaking through people’s front doors and shooting them dead in their homes or strip searching motorists on the side of the road, these instances of abuse are continually validated by a judicial system that kowtows to virtually every police demand, no matter how unjust, no matter how in opposition to the Constitution.

These are the hallmarks of the emerging American police state: where police officers, no longer mere servants of the people entrusted with keeping the peace, are part of an elite ruling class dependent on keeping the masses corralled, under control, and treated like suspects and enemies rather than citizens.

While the First Amendment—which gives us a voice—is being muzzled, the Fourth Amendment—which protects us from being bullied, badgered, beaten, broken and spied on by government agents—is being disemboweled.

A review of critical court rulings over the past decade or so, including some ominous ones by the U.S. Supreme Court, reveals a startling and steady trend towards pro-police state rulings by an institution concerned more with establishing order and protecting the ruling class and government agents than with upholding the rights enshrined in the Constitution.

Police can stop, arrest and search citizens without reasonable suspicion or probable cause.

Police officers can stop cars based on “anonymous” tips or for “suspicious” behavior such as having a reclined car seat or driving too carefully.

Police officers can use lethal force in car chases without fear of lawsuits.

Police can “steal” from Americans who are innocent of any wrongdoing. Asset forfeiture laws, which have come under intense scrutiny and criticism in recent years, allow the police to seize property “suspected” of being connected to criminal activity without having to prove the owner of the property is guilty of a criminal offense.

Americans have no protection against mandatory breathalyzer tests at a police checkpoint.

Police can forcibly take your DNA, whether or not you’ve been convicted of a crime. A divided U.S. Supreme Court determined that a person arrested for a crime who is supposed to be presumed innocent until proven guilty must submit to forcible extraction of their DNA. In doing so, the Court opened the door for a nationwide dragnet of suspects targeted via DNA sampling.

Police can use the “fear for my life” rationale as an excuse for shooting unarmed individuals. Incredibly, a report by the Justice Department found that half of the unarmed people shot by one police department over a seven-year span were “shot because the officer saw something (like a cellphone) or some action (like a person pulling at the waist of their pants) and misidentified it as a threat.”

Police have free reign to use drug-sniffing dogs as “search warrants on leashes.”

Not only are police largely protected by qualified immunity, but police dogs are also off the hook for wrongdoing. The Fourth Circuit Court of Appeals actually ruled in favor of a police officer who allowed a police dog to maul a homeless man innocent of any wrongdoing.

Police can break into homes without a warrant, even if it’s the wrong home.

Police can use knock-and-talk tactics as a means of sidestepping the Fourth Amendment. Aggressive “knock and talk” practices have become thinly veiled, warrantless exercises by which citizens are coerced and intimidated into “talking” with heavily armed police who “knock” on their doors in the middle of the night.

Police can carry out no-knock raids if they believe announcing themselves would be dangerous. Legal ownership of a firearm is also enough to justify a no-knock raid by police.

The military can arrest and detain American citizens.

As I make clear in my book Battlefield America: The War on the American People, we are dealing with a nationwide epidemic of court-sanctioned police violence carried out against individuals posing little or no real threat, who are nevertheless subjected to such excessive police force as to end up maimed or killed.

When all is said and done, what these assorted court rulings add up to is a disconcerting government mindset that interprets the Constitution one way for the elite—government entities, the police, corporations and the wealthy—and uses a second measure altogether for the underclasses—that is, you and me.