US Constitutional attorney: ‘The Deep State Is Real and Trump Is Its Latest Tool’ 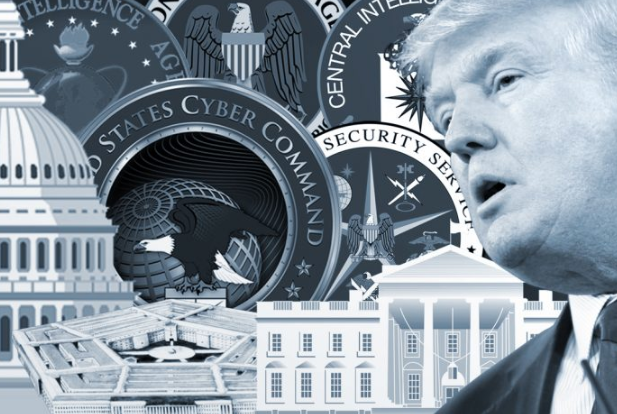 The Deep State—a.k.a. the police state, a.k.a. the military industrial complex, a.k.a. the surveillance state complex—does indeed exist and Trump, far from being its sworn enemy, is its latest tool.

When in doubt, follow the money trail. It always points the way.

Every successive president starting with Franklin D. Roosevelt has been bought—lock, stock and barrel—and made to dance to the tune of the Deep State.

Enter Donald Trump, the candidate who swore to drain the swamp in Washington DC. Instead of putting an end to the corruption, however, Trump has paved the way for lobbyists, corporations, the military industrial complex, and the rest of the Deep State (also referred to as “The 7th Floor Group”) to feast on the carcass of the dying American republic.

Apart from tweets that are little more than sound and fury, Trump is not a man who is raging against the machine. He is too much a part of the machine. Despite claims to the contrary, Trump is not advocating for peace with Russia, or North Korea or any other nation. He is selling us out to the war hawks.

The latest squawk over Iran is just more of the same chest-thumping, sleight-of-hand intended to play into the hands of a salivating military industrial complex for whom war is merely a means to a larger profit margin. The war hawks have no beef with Trump. Why should they? He’s giving them exactly what they want. This is exactly how you keep the Deep State in power.

So how do you recognize the Deep State when it rears its ugly head?

It’s the militarized police, which have joined forces with state and federal law enforcement agencies in order to establish themselves as a standing army.

It’s the fusion centers and spy agencies that have created a surveillance state and turned all of us into suspects.

It’s the courthouses and prisons that have allowed corporate profits to take precedence over due process and justice.

It’s the military empire with its private contractors and defense industry that is bankrupting the nation.

It’s the private sector with its 854,000 contract personnel with top-secret clearances, “a number greater than that of top-secret-cleared civilian employees of the government.”

It’s what former congressional staffer Mike Lofgren refers to as “a hybrid of national security and law enforcement agencies.”

It’s every facet of a government that is no longer friendly to freedom and is working overtime to trample the Constitution underfoot and render the citizenry powerless in the face of the government’s power grabs, corruption and abusive tactics.

Just consider some of the key programs and policies—manifestations of the police state complex—that continue to be advanced by the shadow government with the full support of its latest accomplice in the White House:

Domestic surveillance. The National Security Agency (NSA), with its $10.8 billion black ops annual budget, continues to spy on every person in the United States who uses a computer or phone.

Global spying. The NSA’s massive surveillance network, a $500 billion “espionage empire,” is still spanning the globe and targeting every single person on the planet who uses a phone or a computer.

Roving TSA searches. The American taxpayer is still getting ripped off by government agencies in the dubious name of national security.

USA Patriot Act, NDAA. America’s so-called war on terror, which it has relentlessly pursued since 9/11, continues to chip away at our freedoms, unravel our Constitution and transform our nation into a battlefield, thanks in large part to such subversive legislation as the USA Patriot Act and National Defense Authorization Act.

Domestic drones. The domestic use of drones, now being equipped with weapons, able to record all activities, and use video feeds, heat sensors and radar, has continued unabated.

School-to-prison pipeline. The paradigm of abject compliance to the state continues to be taught by example in the schools, through school lockdowns where police and drug-sniffing dogs enter the classroom, and zero tolerance policies that punish all offenses equally and result in young people being expelled for childish behavior.

Overcriminalization. The government bureaucracy continues to churn out laws, statutes, codes and regulations that reinforce its powers and value systems and those of the police state and its corporate allies, rendering the rest of us petty criminals.

Endless wars. America’s expanding military empire is continuing to bleed the country dry at a rate of more than $15 billion a month (or $20 million an hour).

Are you getting the message yet?

The current president, much like the previous president and his predecessors, is little more than a figurehead, a puppet to entertain and distract the populace from what’s really going on.

So let’s have no more of this caterwauling about Trump being victimized by the Deep State: he is doing too good a job at sowing division, creating distractions that keep Americans oblivious to the government’s ongoing power grabs, and helping to advance the profit-driven agenda of the Deep State.

So the next time you find yourselves mesmerized by Donald Trump’s latest tweets or theatrics or drawn into a politicized debate over the machinations of Congress, the president or the judiciary, remember: as I make clear in my book A Government of Wolves: The Emerging American Police State, it’s all intended to distract you from the fact that you have no authority and no rights in the face of the shadow government no matter who is in office.

As long as government officials—elected and unelected alike—are allowed to operate beyond the reach of the Constitution, the courts and the citizenry, the threat to our freedoms remains undiminished.