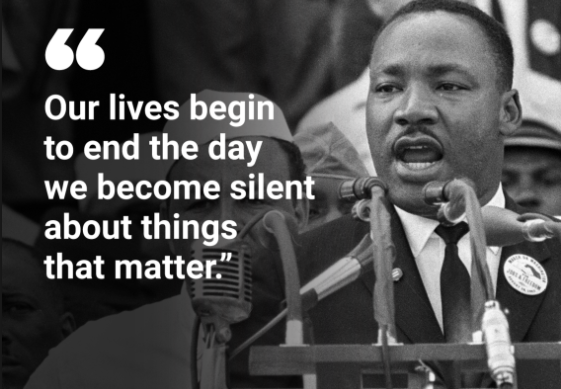 By John W Whitehead: As a nation, we have a tendency to sentimentalize cultural icons in death in a way that renders them non-threatening, antiseptic and easily digested by a society with an acute intolerance for anything controversial, politically incorrect or marred by imperfection.

This revisionist history has proven to be a far more effective means of neutralizing radicals such as Martin Luther King Jr. than anything the NSA, CIA or FBI could dream up.

This was a man who went to jail over racial segregation laws, encouraged young children to face down police dogs and water hoses, and who urged people to turn their anger loose on the government through civil disobedience. King called for Americans to rise up against a government that was not only treating blacks unfairly but was also killing innocent civilians, impoverishing millions, and prioritizing the profits of war over human rights and dignity.

King actually insisted that people have a moral responsibility to disobey unjust laws.

This is not a message that the government wants us to heed.

No, the government wants us distracted, divided, warring against each other and helpless to free ourselves from a lifetime of bondage and servitude to the powers-that-be. It’s working.

In life, King was fiery, passionate, single-minded in his pursuit of justice, unwilling to remain silent in the face of wrongdoing, and unafraid of offending those who might disagree with him.

In death, King has been reduced to a lifeless face on a stone monument: mute, immobile and powerless to do anything about the injustices that continue to plague the nation.

The “giant triplets of racism, extreme materialism, and militarism“ that King railed so passionately against have yet to be conquered.

In fact, the evils of racism, extreme materialism, and militarism have got us in a death grip.

America is still waging endless wars abroad, prioritizing profit margins over principle, and adopting institutionalized racist policies that result in a disproportionate number of people of color being stopped, searched, raided, arrested, thrown in jail, and shot and killed by government agents.

Fifty years later, we have compounded the evils of racism, materialism and militarism with ignorance, intolerance and fear.

Callousness, cruelty, meanness, immorality, ignorance, hatred, intolerance and injustice have become hallmarks of our modern age, magnified by an echo chamber of nasty tweets, government-sanctioned brutality, and “the politics of exclusion.”

“We the people” have become “we the police state.”

By failing to actively take a stand for good, we have become agents of evil.

None of us who remain silent and impassive in the face of evil, racism, extreme materialism, meanness, intolerance, cruelty, injustice and ignorance get a free pass.

Those among us who follow figureheads without question, who turn a blind eye to injustice and turn their backs on need, who march in lockstep with tyrants and bigots, who allow politics to trump principle, who give in to meanness and greed, and who fail to be outraged by the many wrongs being perpetrated in our midst, it is these individuals who must shoulder the blame when the darkness wins.

The darkness is winning.

It’s winning in every new generation that is being raised to care only for themselves, without any sense of moral or civic duty to stand for freedom.

We are on the wrong side of the revolution.

“If we are to get on to the right side of the world revolution,” advised King, “we as a nation must undergo a radical revolution of values. We must rapidly begin the shift from a thing-oriented society to a person-oriented society.“

Freedom demands that we stop thinking as Democrats and Republicans and start thinking like human beings, or at the very least, Americans.

Freedom demands that we not remain silent in the face of evil or wrongdoing but actively stand against injustice.

Freedom demands that we treat others as we would have them treat us. That is the law of reciprocity, also referred to as the Golden Rule, and it is found in nearly every world religion, including Judaism and Christianity.

As long as we continue to allow ignorance, intolerance, racism, militarism, materialism and meanness to trump justice, fairness and equality, there can be no hope of prevailing against the police state.

Martin Luther King Jr. dared to dream of a world in which all Americans “would be guaranteed the unalienable rights of life, liberty, and the pursuit of happiness.”

He didn’t live to see that dream become a reality.

It’s still not a reality. We haven’t dared to dream that dream in such a long time.

As I make clear in my book Battlefield America: The War on the American People, tyranny wouldn’t stand a chance.

Constitutional attorney and author John W. Whitehead is founder and president of The Rutherford Institute. His new book Battlefield America: The War on the American People (SelectBooks, 2015) is available online at www.amazon.com.